The opening of the first Orthodox church in the history of the western Germany city of Bonn was held yesterday. The festive event was attended by several hundred people, reports Zvezda.

The opening of the new Russian Orthodox Church dedicated to the holy Equal-to-the-Apostles Empress Helen was known not just in Bonn, but throughout western Germany as a whole. Statistics show that more and more ethnic Germans have been converting to Orthodoxy in recent years. 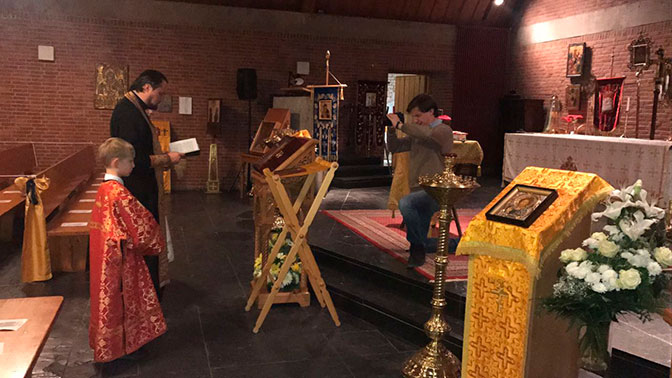 Bonn has been home to the Orthodox community of the Holy Protection of the Mother of God since 1964, mainly consisting of Russian-speakers, which rented a small room in an Evangelical church. Now, several decades later, a philanthropist bought out the Evangelical church and transferred it to the Russian Orthodox Church.

The Orthodox faithful baked pirozhki and other traditional Russian dishes for the celebration. Services in the church will be celebrated in both Russian and German.

Archbishop Theophan of the Diocese of Berlin of the Moscow Patriarchate recently departed to the Lord on September 11. The diocese is temporarily being administered by Bishop Anton of Zvenigorod. Between the parishes directly under the Moscow Patriarchate, and those within the Russian Orthodox Church Outside of Russia, the Russian Orthodox Church has over 150 parishes in Germany. Italy is home to Russian Orthodox Church’s fastest growing foreign diocese
The head of the administration for Moscow Patriarchate churches abroad Bishop Anthony of Bogorodsk stated in a recent interview with TASS that the Russian Orthodox Church has nearly 900 parishes in foreign countries, the greatest number of which are in Germany and Italy. German court convicts 7 of financing Jihad with stolen church funds
Judges in Cologne, Germany have ruled that there is satisfactory proof that seven men broke into up to five churches and other buildings between 2013 and 2014. 40,000 Christians Persecuted By Muslims In Germany
A new study shows that potentially thousands of Christians have been attacked and harassed in German migrant homes by Muslim guards and fellow migrants.
Comments
×