Homily on the Commemoration day of St. Ambrose of Optina 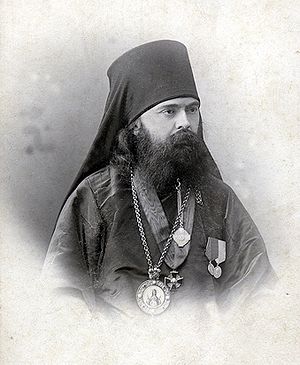 Metropolitan Triphon (Turkestanov) of Dimitrov. Photo: wikipedia.org
The author of this homily in remembrance of Hieroschemamonk Ambrose of Optina, Metropolitan Triphon (Turkestanov) of Dimitrov, was born in Moscow on June 14, 1934. In the world he was Prince Boris Petrovich Turkestanov. His father was from an ancient Georgian princely family that had moved to Russia in the seventeenth century, and his mother was of the noble Naryshkin family.

Boris was sickly as an infant, but his mother, who loved to pray in the Church of Holy Martry Triphon on what was then the outskirts of Moscow, made a vow to the holy martyr that if the child gets well she will dedicated him to God. After this the boy did get better and soon became perfectly healthy.

His pious mother also took the child to Optina Monastery, to receive a blessing from Elder Ambrose. When the elder saw the mother and son approaching, he told all the other visitors to “make way for the bishop”.

After receiving his secular education, Boris entered Optina Monastery as a novice, and remained there from 1884 – 1888 under the guidance of elder Ambrose. He was then sent to the Caucasus as a missionary, where in 1889 he was tonsured a monk with the name Triphon, after the holy martyr. Two years later he entered the Moscow Theological Seminary, from which he graduated in 1985. After heading the Betania and the Moscow Theological Seminaries, in June of 1901, Fr. Triphon was consecrated bishop of Dimitrov, a vicariate of the Moscow Metropolitanate.

Bishop Triphon went to the front during World War I, where his health was seriously undermined. Due to health problems he asked to be relieved of his duties as bishop and was granted release, although he was then appointed father superior of New Jerusalem Monastery, north of Moscow. He was raised to the rank of Archbishop in 1923, and Metropolitan in 1931, on the occasion of his thirty-year anniversary of episcopal service.

Metropolitan Triphon died on June 14, 1934 and was buried in the Vvendensky Cemetery (also known as the German Cemetery) in Moscow. Many still visit his grave today. 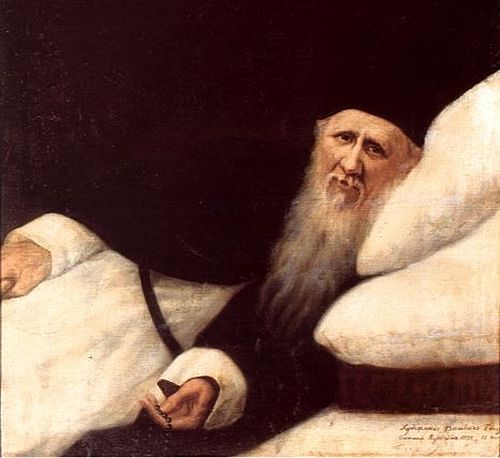 Today we celebrate the name day of the ever-memorable elder, Hieroschemamonk Ambrose. How vividly, how clearly I remember his name day in the Optina skete. On that day there was a solemn Liturgy, and the elder received the Holy Mysteries of Christ; then after the Liturgy and moleben served for his health, the superior of the skete and all the brothers went to his cell to congratulate him with his name day. And as if it were now I can see him sitting on his bed, in a white cassock and a new epitrachelion, with an extraordinarily bright and joyful expression. We believe that even now, after his death, there in the Kingdom of Heaven he rejoices and thanks us for not forgetting his name day, that we have united in prayer and one heart and voice to pray for him to the Lord God. And we believe and hope that he does not forget us in his prayers, and will be our helper in all our needs, sorrows, and sicknesses.

As you know, Batiushka, despite his own infirmity and sickness, which troubled him from a very early age (his illness made him simply an old man in his youth), he was nevertheless a steadfast warrior of Christ the Savior; truly he struggled all his life with the spirits of evil—and triumphed. He was a warrior all his life, and he finished his life this way—his life ended in victory.

The apostle Paul in his Epistle to the Ephesians says to the inhabitants of Ephesus that they must be vigorous and attentive warriors, that they must not slacken, they should not for a minute abandon their calling as warriors of Christ the Savior. He repeats this to them twice, that they would put on the full armor of God as befits warriors—that is, as warriors would dress themselves in ancient times—so that you also might war with enemies in these evil and deceitful days. This same struggle awaits you also, only not with flesh and blood but with those who hold the sinful world in their power—that is, with the rulers of darkness of this age, the spirits of evil under heaven. You should battle for this truth; no evil word, no lying word should ever leave your lips. You should shod yourselves in preparation to preach the Good News to the world; you should be ready to give any kind of help. Do not get irritated if you see an unworthy person—remember that you yourself have many more inadequacies. Strive to always bring peace to others; try to help everyone in any way you can: in word, deed, and compassion of heart. Enclose your heart in the armor of truth—that is, try to make all your actions to be without any lies or passionate attachments. On your heads should be worn the helmet of salvation; that is, strive to purify you minds and hearts from evil thoughts; strive to preserve your souls from vices, strive to cleanse your souls and the souls of those close to you, and then take the sword of faith in your right hand, and a shield in your left hand, in order to guard the Word of God, deflecting the enemy of salvation as with arrows. Further the apostle says, “Now is not the time to rejoice, to be comforted, not to waste precious time. How often do unbelieving people give us this “advice”: “Life is made for pleasure!” No, now is the age of struggle, an evil age… Pray, be strengthened by the power of God, because you must face a complicated struggle against the enemies of salvation, against evil. Look at how they act in diverse ways—now suggesting bad thoughts in order to turn people away from God, now through various writings that try to prove that there is no God, turning in this way many people away from God and the Church. Need I tell you about this, dear brothers and sisters? How many times have you had to hear and endure attacks against our faith and our Church!

Therefore I ask you not to forget the apostle’s command: Be manly, and stand strong in the faith!

It is as if Fr. Ambrose were saying these words to us; as if he were saying to us, “Look at me. I was deprived of everything in this life—health, and strength for this struggle. But I was still a faithful warrior. I believed, I strove to live according to the faith, I saved many from falling—both through the example of my own life, and through instructions and teaching.” He loved to say, “Suffer long, be thankful for everything, rejoice over everything, praying unceasingly for all.” That means, endure in this life, bear all sorrows with hope in reward in the future life; treat all people with love, thank them for everything, no matter what they do to you. And most importantly, pray not only for yourself but also for everyone—for prayer brought to the Lord for others can accomplish much.

I sincerely believe that batiushka Father Ambrose, seeing that we have not forgotten him and have prayed for him will always pray for us; especially in the terrible hour of our soul’s separation from the body. 360° Video of Akathist to St. Ambrose of Optina

360° Video of Akathist to St. Ambrose of Optina
This 360° panoramic video of the reading of an akathist from Optina Pustyn Monastery provides a unique view of the veneration of the monastic brotherhood and the people for the great Optina elder St. Ambrose. Miraculous help from St. Ambrose in our days

Miraculous help from St. Ambrose in our days
Stories from the editor’s mail at Pravoslavie.ru
"The Lord is nearer to us than it seems, and through people and situations He always guides us through life by the prayers of our venerable and God-bearing father Ambrose, elder of Optina, and of all the saints—of course, for those who follow Christ." The Life of St. Ambrose of Optina

The Life of St. Ambrose of Optina
Commemorated October 10/23
God’s abundant benevolence that resided in him, was the source of those spiritual blessings that allowed him to serve those that visited him, comforting the grieving, strengthening the faith in those that were wavering and directing everybody toward the path of salvation.
Comments

Anthony 10/24/2017 7:02 am
St Ambrose is also a fabulous bulwark against ecumenist delusions. I would strongly recommend the ecumenistically minded pseudodox read his polemic in which he delivers a delectable tongue lashing against those well disposed to the latins: