Music and Ancient History in the Caucasus 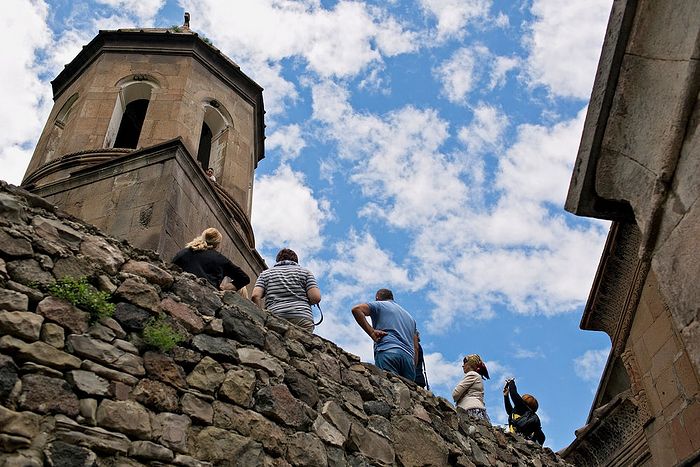 The bell tower at the monastery in Sapara; the church of St. Saba was added in the 14th century.

The idea was to take a trip with my 22-year-old daughter, Liza, an adventure worthy of a college graduation present. We settled on a 10-day journey through the small Caucasus country of Georgia, with a swing through neighboring Turkey, in search of the long-lost kingdom of Tao.

It sounded vaguely Chinese and the scenery did look at times like Chinese scroll paintings: rocky, pine-covered mountains cut through by waterfalls, fast-moving rivers and vast upland plateaus with alternating patches of snow and wildflowers.

But the stunning landscape was just the backdrop for the trip. Although the boundaries of the Tao-Klarjeti kingdom, as it is sometimes called, once part of a larger realm ruled by the Bagratid dynasty, had vanished from the map by the 11th century, its Georgian rulers left behind an astonishing collection of churches, monasteries and fortresses. Said to number 300, they are scattered across territory later disputed by, notably, the Byzantines, the Mongols, the Persians, the Seljuk Turks, the Ottomans and the Russians.

These remnants of ancient Georgian culture were what drew us to join John Graham, an American musicologist and tour leader who lives in Tbilisi, the Georgian capital, and seven other travelers on a journey that began in the Black Sea city of Batumi, circling through the Turkish cities of Kars, Yusufeli and Ardanuc, before ending in Tbilisi.

... Read the rest at The New York Times. Georgia’s Tsilkani Mother of God complex given status of cultural monument of national significance
The complex currently serves as the episcopal cathedral in the Mtskheta district village of Tsilkani, consisting of the church and protective wall. Mtskheta among the 20 most beautiful heritage sites of UNESCO
The former capital of Georgia referred to as the spiritual heart of the country, has three picturesque, cliff top medieval churches.
Comments