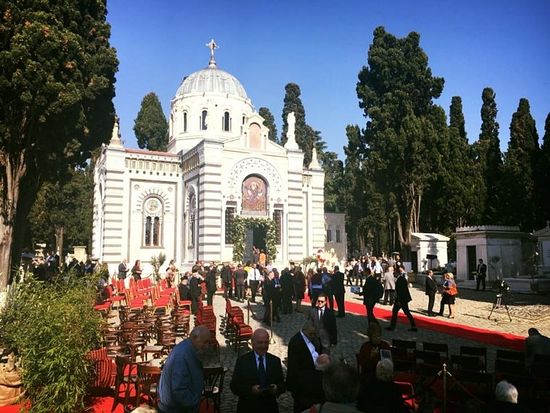 The consecration of the restored historic Church of the Transfiguration in the Şişli Orthodox cemetery in Constantinople was celebrated by His All-Holiness Ecumenical Patriarch Bartholomew on October 22, reports Sedmitza.

The first Divine Liturgy in the newly-consecrated church was then concelebrated by Pat. Bartholomew and fifteen other hierarchs. The service was attended by the Consul General of Greece in Constantinople and numerous clergy and faithful from Turkey and abroad.

Ekirikas.com reports that His All-Holiness stated, with emotion, that the souls of thousands of the Greek people’s forefathers who rest in this land were rejoicing as they awaited the glorious second coming of the Lord and the general resurrection.

The historic Greek Orthodox Şişli Cemetery sits on a 38-acre plot in the center of Constantinople. It is the largest Greek Orthodox cemetery outside of Greece. More than 80,000 Greek Orthodox have found their final resting place there since the mid-19th century. The cemetery includes the tombs of many famous politicians, scientists, and other notable people who have left their mark on the history of the Greek people. 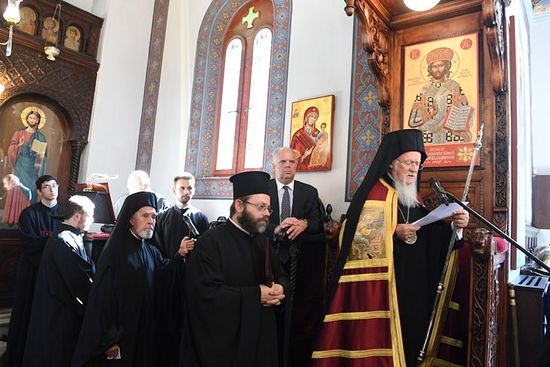 The cemetery’s Church of the Transfiguration was built in 1888 under Ecumenical Patriarch Dionysius V.

The famous cemetery has experienced many disasters during its long history, its monuments being targets of attacks and desecrations. Although the cemetery is still used by the Greek community to this day, its legal status was questionable until recently.

The ambitious task of restoring the cemetery and its church was set four years ago. Marble specialists from Greece and Turkey, students from the Athens School of Fine Arts, architects and restorers managed to revive the church and the unique monuments of the cemetery. Anniversary of fall of Constantinople gives occasion for Greek hierarchs to call for resistance to Greece’s “decapitation from Christ”
The city of Constantinople, the capital of the great Byzantine Empire, fell to the invading Ottoman Turks on May 29, 1453. Recalling the great loss suffered by Orthodox Christians at that time, Greek hierarchs, speaking at events in remembrance of that loss, called for Greeks today to stand up and defend their greatest treasure—the Orthodox faith—against the modern world that seeks to eliminate Christ. Make a wish at one of Istanbul's sacred springs
Referring to sacred springs believed to have healing powers and make wishes come true since Byzantine times, ‘ayazmas' are a part of Orthodox Christians' religious culture, and there are churches in Istanbul that were built above or beside them
Comments

Demetrius Manolakos10/30/2017 4:14 pm
Let us aim for friendship and cooperation, love not hatred with our neighbours.
×