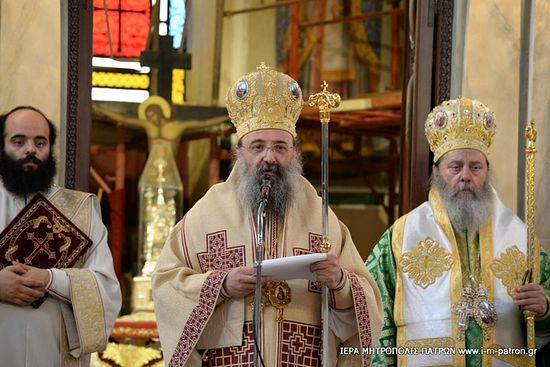 The city of Constantinople, the capital of the great Byzantine Empire, fell to the invading Ottoman Turks on May 29, 1453. Recalling the great loss suffered by Orthodox Christians at that time, Greek hierarchs, speaking at events in remembrance of that loss, called for Greeks today to stand up and defend their greatest treasure—the Orthodox faith—against the modern world that seeks to eliminate Christ.

Speaking at the event “Constantinople: The Acropolis of Orthodoxy. A Beacon Which has not Faded, a Church Which Waits,” organized by his metropolis, Metropolitan Isaiah (Kykkotis) of Tamassos and Oreini (Orthodox Church of Cyprus) took the opportunity to criticize the anti-Christian policies of modern Europe, according to AgionOros.

The Cypriot hierarch stressed that, despite the conquest and foreign yoke, the Roman-Byzantines managed to preserve their Orthodox faith, language, and loyalty to the traditions of their people deep in their hearts. Conversely, the “new franks” use laws and the spread of heretical teachings to try to uproot “all holiness from the souls of modern Greeks and to decapitate Greece from Christ.”

“We have our eyes upon Byzantium and our Greek Orthodox values,” the metropolitan highlighted. “No matter how hard the invaders try, we will not surrender and not reconcile ourselves to the plans and memorandums of the international creditors and anti-Christian, immoral, and neo-liberal instructions from Europe,” he concluded.

Meanwhile, Metropolitan Chrysostomos of Patras celebrated the Divine Liturgy on the anniversary of the fall of Constantinople, followed by a panikhida for final Byzantine emperor Constantine Paleologos and all the defenders of Constantinple and all the martyrs and victims of the Turkish conquerors, reports AgionOros.

Addressing those gathered, Met. Chrysostomos recalled the tragedy of that fateful day in 1453: “Today we remember the fall of Constantinople. The city was taken. We lost an invaluable treasure. We lost our Agia Sophia. The church was converted into a mosque, and then a museum. Today some want to turn it again into a mosque. But none of those who care about human rights and world heritage have expressed any outrage.”

The bishop stressed the need to preserve the traditions and values preserved throughout the centuries in a situation where “the education system propagandizes on the basis of the idea of the Europeanization of Greece.” He further drew a parallel between the Ottoman Yoke and the contemporary reality: “If we want to survive as a nation and as an Orthodox people, striving for the Heavenly Kingdom, not wanting to be dissolved into the cultural melting pot, we must preserve the faith of our fathers,” and “As a people we must put at the center of our lives our Holy Church and Orthodox faith which frees, enlightens, and illuminates. Let us not anger God by our sins and our departure from His will (including by adopting ungodly laws).”

Although the Greek people have been tested by fire and sword, the faith and values of their fathers were never lost, even under the Islamic yoke. However, Met. Chrysostomos adds, “Today there is a danger of their disappearance, because they are being threatened from everywhere, including from rampant eudemonism, materialism, moral decay, and drugs. Today these values are under threat from the so-called new world order and the new political and economic slavery.”

These lords are methodically working to destroy the human soul and conscience, the prelate laments. Furthermore, modern man is so often willing to sacrifice all that is most valuable, in the name of progress and modernization: Church, family, morality, education, and personal freedom. Why Constantinople Matters
Seraphim Hamilton
Constantinople, the New Rome, is the sign of the fulfillment of the Kingdom of God and its political manifestation.

“Orthodox Greece is dying. We have been occupied without a war”—Met. Ambrose of Kalavyrta

“Orthodox Greece is dying. We have been occupied without a war”—Met. Ambrose of Kalavyrta
The hierarch cites several problematic issues in Greece today, including the influx of refugee-invaders, and the government’s abandonment of Orthodoxy and warm overtures towards Islam.

Primate of Greek Orthodox Church: Plan for de-Christianizing Europe being realized in Brussels
According to the archbishop, “history has shown that when we were united, no one could defeat us. We overcame all difficulties. It’s only all together, supporting one another, that the Greeks have overcome hardships.”
Comments

Gabriel5/26/2021 11:48 pm
Is there a proper way to lament the fall of the Hagia Sophia on May 29? Are there any special prayers or services we should attend?

Isidora6/1/2017 12:54 pm
No mention of Patriarch Bartholomew being at this event commemorating his home base. I take it he was busy elsewhere doing the usual: lecturing Orthodox Christians that our religion is the same as anyone else's. As long the Greeks support this heretic as head of their dwindling church, and commemorate him in divine liturgy, I'm afraid all is lost.

Anthony5/31/2017 8:37 pm
''Although the Greek people have been tested by fire and sword, the faith and values of their fathers were never lost, even under the Islamic yoke.''

That sums things up. Our Hellenic lands were wiped off the map for four hundred years, and yet we still resurrected because our forebears lived Orthodoxy as Geron Nikon (Geronda Efraim Philotheitis' spiritual son) says. Now our nation has chosen to follow the western man on the path to perdition. That is the greatest tragedy of what was Hellenic Greece and Cyprus.