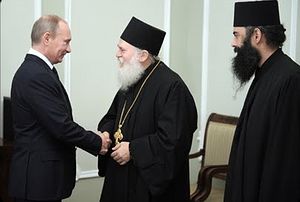 Abbot Ephraim and President Putin in 2011. Photo: johnsanidopoulos.com
Abbot of Vatopedi Monastery on Mt. Athos Archimandrite Ephraim met with President Vladimir Putin on Thursday. According to monasterium.ru, Fr. Ephraim, one of the most influential spiritual fathers on the Holy Mountain, noted in the conversation with the head of state that all are in need of spiritual communication—janitors and officials, oligarchs and presidents.

“They are simple people; the first thing that interests everyone is the salvation of the soul,” Archimandrite Ephraim shared.

During the meeting, the abbot gifted the Russian president an icon from Mt. Athos. According to Fr. Ephraim, the president venerated the icon with great reverence. The head of state’s treatment of sacred objects is, according to the monk, an indication of his faith in God.

“And our knowledge about his life, his parents, and his origin, testify to us that this is a miracle,” Archimandrite Ephraim stated about President Putin.

The Athonite abbot arrived in Russia to hold spiritual conversations with residents and guests of Ekaterinburg. A meeting was held on Friday in the Spiritual-Educational Center of the Ekaterinburg Diocese in which the abbot shared various spiritual experiences, spoke about life on Mt. Athos, and answered various questions.

Elder Ephraim of Vatopedi had previously visited and spoke with residents of Ekaterinburg while traveling with the miraculous Belt of the Theotokos, which is treasured at Vatopedi Monastery, in 2011. At that time, President Putin, then prime minister, met the Vatopedi delegation upon arrival at the St. Petersburg airport on October 20. Patriarch and president open “Wall of Sorrow” memorial for victims of repression
A monument dedicated to the victims of political repression was opened yesterday in Moscow by His Holiness Patriarch Kirill of Moscow and All Russia and President Vladimir Putin. “Where there is God, there is sorrow and the Cross”—Abbot Ephraim of Vatopedi
Following his recent acquittal in a nine-year case involving a land exchange between the Greek government and Vatopedi Monastery, Abbot Ephraim has offered an interview to the newspaper Real. To know Orthodoxy is to Know Russia
Ryan Hunter

To know Orthodoxy is to Know Russia
A superb essay on U.S. and U.K. media’s ongoing Russophobia by Catherine Brown
Ryan Hunter
One cannot hope to understand Russia today without first coming to understand its religious history. Russian Orthodoxy is the only cultural and religious institution that survived Soviet rule.
Comments

Anthony 10/31/2017 10:37 pm
The last time Geronda visited Russia, he was arrested upon return by the sob Greek State on trumped up charges, with the phanar not lifting a finger to help him. Won't be surprised if the NWO shills in Athens try something else on His Holiness again.
×