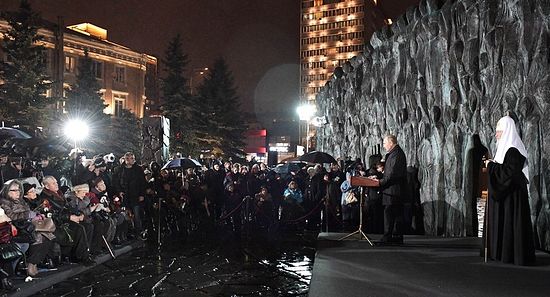 A monument dedicated to the victims of political repression was opened yesterday in Moscow by His Holiness Patriarch Kirill of Moscow and All Russia and President Vladimir Putin. The patriarch urged all gathered for the opening of the “Wall of Sorrow” to never forget the terrible repressions of the previous century, and that the victims were real people and the ancestors of Russians living today, reports Interfax-Religion.

“Memorials are needed for people’s healing. Coming here, recalling the tragic events of our history, people should not feel despondency and despair, but should think about their descendants and about what kind of country and what kind of history they will leave as a legacy,” the primate stated.

His Holiness also emphasized the need to draw the correct conclusions from the preceding century and for the people never to repeat the mistakes of their ancestors.

The monument depicts a faceless mass of victims who were falsely accused under Stalin of being “enemies of the people.” Conservative estimates have 700,000 suffering during the 1937-1938 Great Terror, according to Reuters.

In turn, President Putin called the political repressions a crime which no higher good of the people could ever justify.

“When talking about repressions and the suffering and death of millions of people, it is enough to visit the Butovo firing range and other mass graves of the victims of repressions, of which there are not a few in Russia, to understand that there can be no justification for these crimes,” noted the head of state.

Putin stressed the need to remember the tragedy of the repressions and “the causes that spawned them,” while specifying that “this doesn’t mean a call for the settling of accounts.”

“We must never again push society to a dangerous precipice of division. It is now important for all of us to rely on the values of trust and stability. Only on this foundation will we be able to address the challenges facing our society and country,” the president concluded. The Sorrowful Path of the Wives of New Martyrs and Confessors of Russia
Iulia Aksenova
The wives of the New Martyrs and Confessors of Russia travelled a bitter and sorrowful path. They bore a high service amidst a godless world, raising children, enduring deprivations, repression from the authorities, hunger, and poverty. How did they survive? How did they remain true to Christ? This is what our article is about. 100 years of October Revolution: relics of New Martyrs to be carried throughout Russia
2017 marks two major anniversaries in Russia: one hundred years since the restoration of the patriarchate, and one hundred years since the disastrous October Revolution. The second is to be marked by the Russian Orthodox Church by celebrating all those who died for their faith in the years of Soviet atheism brought on by the revolution.
Comments
×