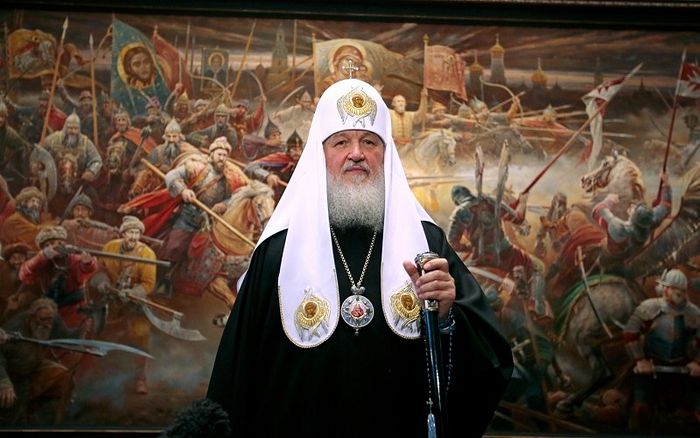 His Holiness Patriarch Kirill of Moscow and All Russia recently expressed his view that that the causes of the October Revolution ultimately lie in events that took place 200 years beforehand. Speaking after the Divine Liturgy on Saturday, the Russian National Day of Unity, in the Kremlin Dormition Cathedral, the primate of the Russian Church spoke of events that led to a loss of faith and the spiritual darkness of the Russian people, Interfax-Religion reports.

“If we sweep aside the entire political environment connected with the events of a century ago, if we detach ourselves from this ideological view, then by this impartial view we will see a great deal, and we will understand that the beginning of our national illnesses, which led to the catastrophe a century ago, began not a year, not five years, not ten years, but at least 200 years, and perhaps even more, beforehand, when they began to destroy the spiritual foundations of the life of our enlightened society, of the so-called elite,” the patriarch said to the gathered crowed of worshipers.

According to the primate, it began “when people lost their internal sovereignty, giving their minds and souls to that which came from outside, receiving these signals from outside uncritically, exposing their faith, worldview, and view on life to these ideas.”

As Pat. Kirill stated, this “led to a loss of faith and a spiritual and intellectual darkening.”

He also noted that many ask, “And what about the Church? Why didn’t it stop it?” “And the Church has an answer to this,” he added.

“For all of its apparent prosperity, the Church was shackled hands and feet by the state… and deprived of the most important thing—the possibility of, not looking to the authorities, or to any outside power, to tell people God’s truth about their spiritual condition, and if necessary, to give its evaluation of the political processes taking place in the life of our society, not from a political point of view, from a spiritual point of view.”

“The Church was forbidden to address the people with such a message, because the head of the Church was the tsar, and he would speak as if from the Church,” Pat. Kirill recalled.

In his view, “the loss of the Church’s possibility of bringing this prophetic word, of course, to some extent contributed to the fact that more and more educated people stopped listening to the voice of the Church.” His Holiness also stated that even today “there are certain forces in society that do not want the Church to tell the truth to its people, to give a prophetic word to the people.”

However, he reiterated that “it is impossible to isolate the Church from the people, because the Church is the people.” “Nothing today can close our mouths; we will proclaim God’s truth, fully aware that is a very risky service,” Pat. Kirill concluded. Spiritual deterioration of Russian people led to Bolshevik Revolution, faith revived at turn of XX and XXI centuries—Patriarch Kirill
“The main lesson we must glean from the last century is that we cannot build human life and society without God. Such societies, in the words of Holy Scripture, are ‘houses built upon the sand,’” Patriarch Kirill underlined. Patriarch Kirill believes the word 'celebrations' inappropriate to 100th anniversary of October revolt
According to him, it is important not to repeat mistakes of the revolution.
Comments

F.11/9/2017 4:18 pm
@Hieromonk Mark
But to resist the new practices (style of crossing, etc.) would mean to weaken the legitimacy of the Czar. If the Czar were to fall, millions of Slavs would have perished at the hand of western and islamic invaders.

Hieromonk Mark11/8/2017 1:32 pm
Perhaps His Holiness, should be looking back further to the the repercussions of the actions of his predecessor, Patriarch Nikon.

The disaster of the schism saw Old Believers spurn the puppet state-Church and defend the ancient Traditions of Holy Russia, whilst Russian society was fractured, traumatised and divided.

After the raskol and the horrendous persecution of the Old Believers by Church and state over the next two centuries, Russian society was weakened and splintered with people alienated, outcast and stirred up against the establishment.

The 17th century schism polarised Russia and divided it's faithful; Church and society would never be the same again.

Eliyah11/7/2017 9:42 pm
Everything is in the hand of the Holy One. The priests are servants to the holy people not kings on the people. For in Genesis 49 our father Yaakov cursed the council of the levites for their violence. Bashing the Tsar is not why the revolution came ... it came because of the Pride coming from everywhere including the bishops who were mercenaries instead of being humble shepherd like the humble Peter & Paul...

Fr. Michael11/7/2017 9:09 pm
If these are truly the Patriarch's thoughts, then the Russian Church is on the right path. Ideas coming in from the outside such as ecumenism, the seductions of Rome, the evil foolishness of Constantinople, these outside influences must be resisted. As with the fascination with all things western 150-200 years ago, so these clear dangers to Orthodoxy and the Russian people's spiritual integrity must resisted and thrown out. Russia and the Slavs in general may be the saving of genuine Christianity, in fact the last remnant of it.
×