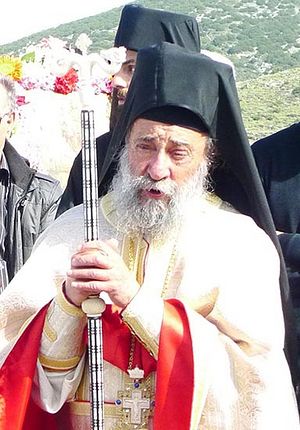 Photo: aktines.blogspot.ru
Archimandrite Gregory (Zumis), the abbot of Dochariou Monastery on Mt. Athos, has commented on the Greek government’s plans to legalize soft drugs and to allow the free cultivation of marijuana, saying “The devil has raised his banner high today,” reports AgionOros.

“The devil has raised his banner high today. People of sin seek to turn their passions into a guide and example to be followed. The rulers want us not to protest and to keep quiet this time. This is a terrible and unprecedented deed—to allow the cultivation of the plant of death,” the Athonite forcefully writes.

The abbot of the Athonite monastery reported that he had received information about the visit of a high-ranking Greek politician to Mt. Athos being prepared: “Those who legalize narcotics express their (supposed) desire and thirst to visit this holy place. I was told that a new attempt to organize the visit of a godless politician is underway.” Fr. Gregory is referring to Prime Minister Tsipras of Greece, whose previous trip to the Holy Mountain was canceled due to the protests of the monks of the mountain, including black flags with the inscription “Keep the Antichrists off the Holy Mountain” being posted in Dochariou Monastery.

Commenting on the canceled trip at the time, Archimandrite Gregory emphasized, “A fight was given, and the futility of the authorities was manifested. The Cross was victorious, the Theotokos, the protectress of Athos was victorious, the prayers of the monks were victorious. The main satrap of the recent years has not set foot on the Holy Mountain.”

Fr. Gregory also called for an end to “preparing a meeting for atheists and the antichrist,” and “is asking the Lord to lay low those who hate New Zion.”

According to the Athonite archimandrite, Orthodox Christians should not make the mistake of voting for godless authorities: “We have to be careful, because those who are being promoted as alternative candidates for government may become even more aggressive against the Church. Double trouble! A coin has two sides. I am afraid that the godless and sin will come out in a new edition. People, be careful!” Minister of education of Greece: “We are launching the process of separation of Church and state”

Minister of education of Greece: “We are launching the process of separation of Church and state”
Aristidis Baltas, the new Greek minister of culture, education and religious affairs, at the meeting of Parliament has formulated the government’s program on relations between the Church and state.
Comments

F.11/14/2017 4:20 pm
It may not be knowst to Greeks, but in America the prohibition of marijuana has been used to dupe "conservatives" into giving police and government ever-increasing unconstitutional powers since 1970. Here now in the US you can have your assets stolen without trial, be randomly shot, searched without warrant or decensy. The so-called "conservatives" can now do virtually anything- torturing, violation the right to trial, spying on all movement and communications, shilling for the industrial interests who stand to profit from colonial war, all under the assurance that their voting sector will continue to vote single-issue on "culture war" topics, turning a blind eye to all else.
×