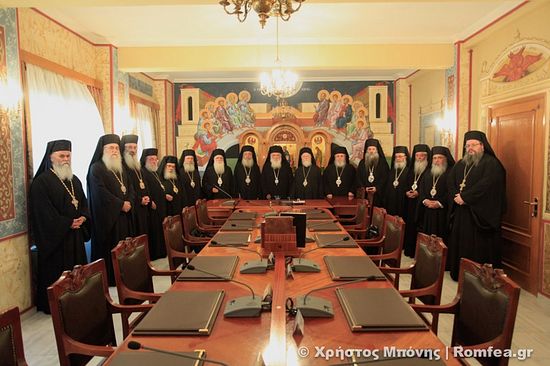 The Holy Synod of the Greek Orthodox Church has called for an extraordinary session to address the serious situation surrounding the nation’s educational system. The current Greek Cabinet of Ministers, headed by the atheist Alexis Tsipras, previously promised to coordinate with the Greek Orthodox Church on the matter of reforming education in the country, but this has not happened, and officials are making decisions that largely contradict the positions of the Greek Church.

His Beatitude Archbishop Ieronymos of Athens spoke out against the September 2015 statement of Deputy Education Minister Sia Anagnostopoulou that students should not be obligated to take religious classes and she announced a simplification of the procedure for opting-out of such classes. Asked to respond, the archbishop noted that such a change requires more consideration, reminding that education is to be national and following the Greek Orthodox religion according to the Greek constitution.

Following a September 29, 2015 meeting with the Greek primate, Education Minister Nikos promised not to make any decisions without the input of the Orthodox Church, saying, “There is an understanding. There will not be any unilateral actions. We believe that we can achieve reform on religious education.” The archbishop said that the Church and state must be in close cooperation for mutually beneficial results “without stubbornness and obsessions.”

Despite the ministry’s promise, the Church is continually faced with problems from the wayward department. In September 2016, the Synod spoke out against the cancellation of mandatory school prayer, which is provided for in the 98% Orthodox country by Presidential Decree 201/1998.

In January of this year, the Ministry of Education introduced a week of sexual education studies in all public schools, aimed at “eradicat[ing] sexual prejudice” and “homophobia and transphobia” through discussions on sexual behavior and relations, including in adolescents, analyses of phallic symbols, discussions of sexual identity and gender, and of abusive words the children hear or find in the media. Needless to say, the leftist program has evoked outrage from Greek Orthodox parents and several members of the Church’s hierarchy (see here and here).

In response, the ministry clarified that the “thematic week” is mandatory, and even called on Greek bishops to support the “transgender” courses, saying, “The hierarchy has the wisdom to understand the circulars” on the matter.

In late 2016, Prime Minister Alexis Tsipras guaranteed that new textbooks would not be used in this academic year for teaching religious studies, and the subject would be reformed only by agreement with the Church. Minister of Education Nikos Filis declared that he would also adhere to this position. However, the government has most recently unilaterally adopted a new program, proving Abp. Ieronymos correct when he said, “The problem is that Mr. Filis is an inconsistent person: He says one thing in the evening and another thing in the morning. Naturally it is very difficult to expect good results from cooperation with him.”

The Synod’s call for hierarchs to meet to discuss the current situation, and to familiarize themselves with the religious studies program newly-adopted by the authorities was published on Romfea. The communiqué reads:

“The permanent Holy Synod of the Greek Orthodox Church gathered today, Tuesday, June 20, 2017, under the chairmanship of His Beatitude Archbishop Ieronymos of Athens and All Greece in order to inquire about the religious course programs [in public school], following the release of the new issue of the official gazette.

His Beatitude the Archbishop reported that the work of the three-hierarch Church commission for cooperating with the competent members of the Ministry of Education, Research, and Religious Affairs ended with the termination of the previously adopted resolutions and the publication of new resolutions concerning the teaching of religion.

Consequently, the permanent Holy Synod unanimously decided to convoke an extraordinary Hierarchical Synod of the Greek Orthodox Church next Tuesday, June 27, to inform about the issue.”

Michael Mouyis6/24/2017 12:28 pm
With religion being taught we still have corruption and theft, imagine when it is not taught.The morality of society will decline even further. We simple have to look at countries that have removed religion and prayer from the school environment. May God protect us.

Anthony6/22/2017 10:50 pm
Since nothing good can happen without God’s help, like He said Himself: "for without Me you can do nothing" (John 15:5), therefore the holy elder expected the salvation of the Nation to come from God. He said: "If God left the fate of the Nation to the politicians, we would be destroyed. But He leaves things a little, so that the intentions of everyone are revealed". ("Life of elder Paisios the Hagiorite", Hieromonk Isaac, p. 704).

The faithful, when having their hope in God, don’t give too much regard to their vote, because they believe that, first of all, it is God who will change things, and not the vote. He will change them for sure, because the New World Order supporters by fighting against His law, they are fighting against God Himself. However, the faithful should also prove their piety the way the holy elder mentioned. They should do this without anxiety, since God looks at our intention, and not if the candidate we voted ended up failing our expectations. Moreover we should pray for our rulers, so they are well inclined to change for the better.