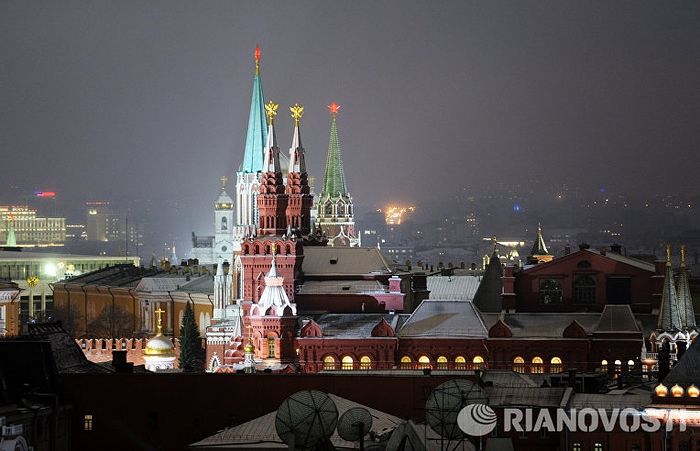 The Russian Orthodox activist movement Forty Times Forty has called for the ruby stars to be removed from the towers of the Kremlin, to be exchanged with two-headed eagles, which, according to the organization, could serve for reconciliation and the restoration of historical justice, reports RIA-Novosti.

“We sincerely believe that the ruby stars should stand on those buildings that were built during the 70-year Soviet period of Russian history, but not on the Kremlin towers, which the Bolsheviks have nothing to do with building,” the movement’s statement reads.

In a century of revolution, when, in the view of the movement, Russian society has reviewed the results of “the social experiment of state-building without God and His commandments, the two-headed eagles of the thousand-year Russian Empire should be returned to the towers of the Moscow Kremlin.” As the movement notes, much is heard today about “reconciliation,” continuous historical processes, and the thousand-year Russian statehood.

“But looking at the Kremlin, the natural question arises: What happened to the imperial gold double-headed eagle with a scepter and orb, which is the emblem of our country, and what do the red stars have to do with the 500-year-old Kremlin, built by an Moscow Orthodox prince in the very heart of the Third Rome—the most powerful Orthodox kingdom?” the movement’s message reads.

The Orthodox activists recalled that the Spasskaya, Troitskaya, and Nikolskaya towers of the Kremlin were named in honor of Christ, the Holy Trinity, and St. Nicholas the Wonderworker, and expressed bewilderment about why the stars, “under the sign of which was carried out a persecution of Christians unprecedented in world history, thousands of amazing cathedrals were blown up, relics were ravaged, believers were mocked, and children were taught to spit on icons,” remain on the towers to this day.

“As we are seeking reconciliation of the 70-year Soviet period with the 1,000-year Orthodox empire, it would be good if all the Soviet symbols, created in Soviet times, would remain unchanged, and the old, pre-revolutionary symbols, created by our great ancestors would return to their original meaning and title,” the activists added.

Forty Times Forty movement coordinator Andrew Kormukhin noted that they plan to collect signatures to call for the replacement of the stars, which will be sent to the presidential administration and to the office of the president itself. Larissa Terry8/24/2018 11:12 pm
“Someone decided that it wasn’t appropriate to have an emblem of the Rjssian Empire after 1935 ;)” iSay! So, they created s star. Then Stalin didn’t like the design and they created another one!