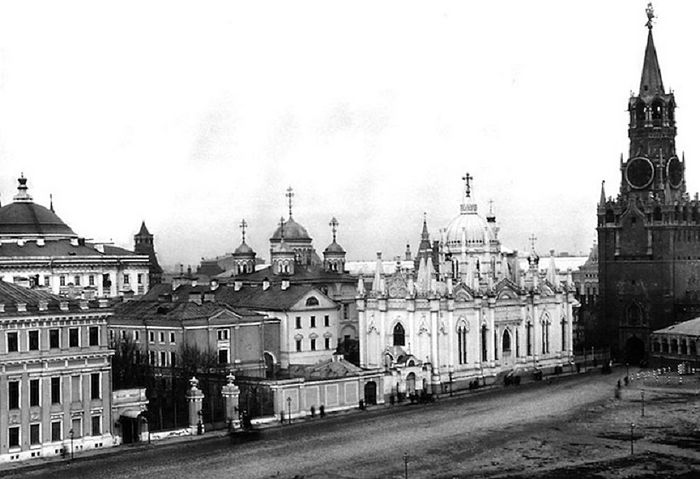 Archeologists who are doing excavation work on the site of the demolished 14th unit of the Moscow Kremlin have found parts of the destroyed Chudov and Voznesensky Monasteries.

"The dismantling of the 14th unit provided a unique and unexpected perspective for the archeological research of the eastern part of the Kremlin Hill, where the Chudov and Voznesensky Monasteries and the Small Nikolayevsky Palace, which were destroyed in 1929, were located," the presidential property department told Interfax.

The archeological studies are being undertaken by the Institute of Archeology of the Russian Academy of Sciences, which began working in November 2015.

The territory vacated by the removal of the 14th unit was landscaped on the basis of the historical construction of the Chudov and Voznesensky Monasteries found by the archeologists.

The proposal to remove this administrative building was made by Russian President Vladimir Putin. The unit was built in 1932-1934 on the sites of the Chudov and Voznesensky Monasteries and the Small Nikolayevsky Palace, which were destroyed in 1929-1930. It was among the buildings that formed the Ivanovskaya Square.

The demolition of the 14th unit of the Kremlin, which was located between the Spasskiye Gates and the Senate Palace, began in November 2015. Demolition Has Begun on Soviet-Era Building Built on Site of Kremlin Monasteries
Paul Gilbert
The long awaited demolition of the Kremlin Presidium or "Building 14" began this week. The building was constructed in the 1930s, and up until 2011 the Soviet era building formerly housed the offices of the Presidium of the Supreme Soviet, the highest legislative body of the Soviet Union.

Restoration of the Kremlin monasteries to start after the decision of UNESCO
All the necessary documents related to the impending work have been submitted to UNESCO. Now all depends on the promptness of this organization’s decision-making.
Comments
×