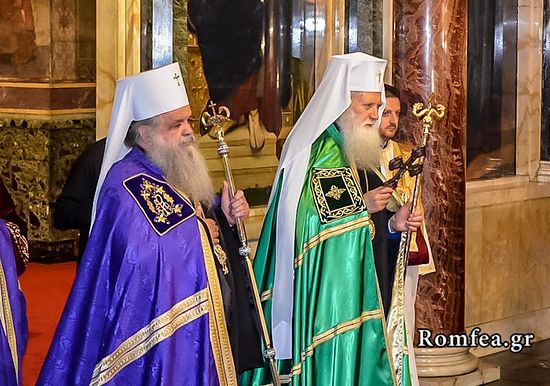 An unprecedented document has been released in the Bulgarian Orthodox Church (BOC) from the schismatic Macedonian Orthodox Church. According to Romfea, the uncanonical church is ready to recognize the Patriarchate of Bulgaria as its Mother Church.

The letter, sent to the Holy Synod of the BOC on November 9, speaks of the restoration of Eucharistic communion and of the historic opportunity for the patriarchate to become the Mother Church of the so-called Macedonian Church under the leadership of Archbishop Stephanos.

The Synod from Skopje has asked the BOC to establish “Eucharistic communion with the renewed Ohrid Archbishopric,” asking that that the Macedonian Church be recognized as autonomous, according to meta.mk.

There have been both official and unofficial contacts between the people of the Patriarchate of Bulgaria and of the schismatic church lately, although the Bulgarian Church had been hesitant to make the first step. Relations between the Macedonian Church and the canonical Local Churches of the Orthodox Church have been strained and complicated by the previous persecution of Archbishop Jovan (Vraniskovski) of Ohrid, the sole canonical bishop operating in Macedonia, who is a member of the Serbian Orthodox Church.

The Orthodox Ohrid Archbishopric under Abp. Jovan separated from the Macedonian church in 2002 to seek reunification with the Serbian Church.

In May 2015, the Synod of Bishops of the Serbian Orthodox Church resolved to resume the dialogue of its representatives with the self-declared Macedonian Orthodox Church in order to settle the issue with its canonical status, which the synod stated depends upon the positive resolution of the proceedings against Archbishop Jovan.

His Eminence Archbishop Jovan was imprisoned for many years on trumped-up charges of “inciting national, racial and religious hatred, schism and intolerance.” At times he was placed in solitary confinement, and he was allowed few visitors from the Serbian Orthodox Church. He was released from prison on February 2, 2015, although new proceedings against him began soon afterwards.

Meanwhile, the European Court of Human Rights recently ruled that the Republic of Macedonia is guilty of violating the rights of the canonical Ohrid Archbishopric by refusing to register it as a separate religious community. The state has been ordered to pay 9,500 euros ($1,1193) to the Serbian Orthodox Church’s Diocese of Ohrid.

Communication between representatives of the schismatic Macedonian church with the Bulgarian Patriarchate began already several years ago. In May 2015, Patriarch Neofit officially received Archbishop Stephanos, who had visited the country at the invitation of the Bulgarian Academy of Sciences, at the Cathedral in Sofia.