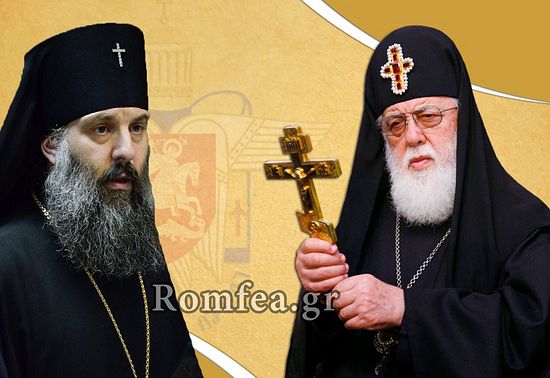 His Holiness Catholicos-Patriarch Ilia II chose today, when the Georgian Church is celebrating its greatly-beloved feast of the martyrdom of St. George, to make an historic announcement. Shortly before celebrating the Divine Liturgy in the Church of St. George-Kashveti in the center of the capital, the primate announced a locum tenens for the patriarchal throne of the Georgian Orthodox Church, according to information from Romfea.

Metropolitan Shio (Mudzhiri) of Senaki and Chkhorotsqu’s name was given in the order read out by His Holiness Ilia.

“I congratulate you all with the feast of St. George. It is an historic feast day. St. George wanted us to have a locum tenens, and that is Vladyka Shio. I congratulate Vladyka Shio with this high rank. I hope he will justify the hope rested upon him. May God preserve you,” the patriarch stated, according to 1tv.ge.

According to the charter of the Georgian Orthodox Church, adopted at an extended Church council in 1995, a locum tenens governs the Church in the event of the death of the patriarch, his abdication from the patriarchal throne, or other circumstances that render the patriarch unable to fulfill his duties. The locum tenens is authorized to convene an extended meeting of the Georgian Church to elect a new catholicos-patriarch of all Georgia. He also calls a meeting of the Holy Synod beforehand, for the selection of patriarchal candidates.

Catholicos-Patriarch Ilia II, elected as patriarch of the Georgian Church in December 1977, is 84 years old. Sources did not indicate why he has now chosen a locum tenens.

Metropolitan Shio was born Elizbar Mudzhiri on February 1, 1969 in Tbilisi. After high school, he studied at the Tbilisi State Conservatory.

In 1991, he became a novice at Shio-Mgvime Monastery, near the city of Mtskheta, and was tonsured in 1993 with the name Shio. He was ordained as a hierodeacon in 1995, and as a hieromonk in 1996. A year later he became the rector of the Church of St. George in the Kldisubani district of Tbilisi.

In 1998 he graduated from the Seminary of St. John the Evangelist in Batumi and continued studying abroad via the Moscow Theological Academy. The same year he was elevated to the rank of igumen and was appointed the rector of the Cathedral of St. Elijah (Ilia) the Prophet, and later of several other parishes.

According to Georgian media, Met. Shio is the spiritual father of Georgian president Giorgi Margvelashvili. Georgian priest gets 9 years for attempted murder of patriarch’s secretary
After several months of closed proceedings, the Tbilisi city court found Archpriest George Mamaladze guilty of the attempted murder of the secretary of His Holiness Catholicos-Patriarch Ilia II Shorena Tetruashvili. It was originally believed that he was plotting the murder of the patriarch himself, although it later became clear that this was not the case.

The most popular person in Georgia is Catholicos-Patriarch Ilia II
DNI research in Georgia is financed by the Swedish International Development Cooperation Agency (SIDA). Polls are conducted by the Caucasus Research Resource Center (CRRC).
Comments
×