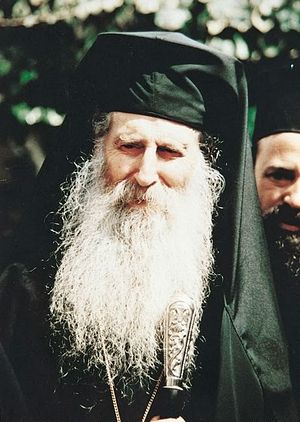 Photo: full-of-grace-and-truth.blogspot.ru
According to exclusive information from the Greek-language Orthodox site Romfea, the Holy Synod of the Ecumenical Patriarchate resolved today to officially number the blessed Elder Iakovos (Tsalikis) of Evia among the saints of God.

The meeting was chaired by His All-Holiness Ecumenical Patriarch Bartholomew.

St. Porphyrios said of the late Elder Iakovos, “Mark my words. He’s one of the most far-sighted people of our time, but he hides it to avoid being praised.”

He lived for the Divine Liturgy, which he celebrated every day, with fear and trembling, dedicated and, literally, elevated. Young children and those with pure hearts saw him walking above the floor, or being served by holy angels. As he himself told a few people, he served together with Cherubim, Seraphim and the saints. During the Preparation, he saw angels of the Lord taking the portions of those being remembered and placing them before the throne of Christ, as prayers. When, because of health problems he felt weak, he would pray before the start of the Divine Liturgy and say, “Lord, as a man I can’t, but help me to celebrate.” After that, he said, he celebrated “as if he had wings.” 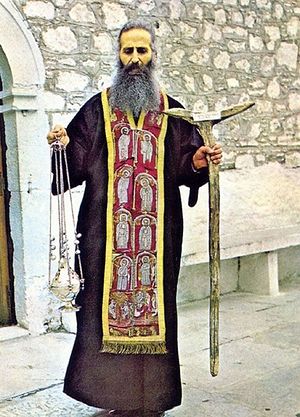 Photo: full-of-grace-and-truth.blogspot.ru
He was a wonderful spiritual guide, and through his counsel thousands of people returned to the path of Christ. He loved his children more than himself. It was during confession that you really appreciated his sanctity. He never offended or saddened anyone. He was justly known as “Elder Iakovos the sweet.”

He always had the remembrance of death and of the coming judgement. Indeed, he foresaw his death. He asked an Athonite hierodeacon whom he had confessed on the morning of November 21, the last day of his earthly life, to remain at the monastery until the afternoon, in order to dress him. While he was confessing, he stood up and said, “Get up, son. The Mother of God, St. David, St. John the Russian and St. Iakovos have just come into the cell.” “What are they here for, Elder?” “To take me, son.” At that very moment, his knees gave way and he collapsed. As he’d foretold, he departed “like a little bird.” With a breath like that of a bird, he departed this world on the day of the Entry of the Mother of God. He made his own entry into the kingdom of God. It was 4:17 in the afternoon.

His body remained supple and warm, and the shout which escaped the lips of thousands of people: “Saint! You’re a saint,” bore witness to the feelings of the faithful concerning the late Elder Iakovos. Now, after his blessed demise, he intercedes for everyone at the throne of God, with special and exceptional confidence. Hundreds of the faithful can confirm that he’s been a benefactor to them.

The memory of Elder Iakovos will be celebrated on November 22 according to the New Calendar. The Elder of love, forgiveness and discernment
Alexandros Christodoulou

The Elder of love, forgiveness and discernment
Alexandros Christodoulou
His asceticism was astonishing. He ate like a bird, according to his biographer. He slept on the ground, for two hours in twenty-four. The whole night was devoted to prayer.
Comments

Anthony H8/29/2018 7:55 pm
Read the complete life of Saint Iakovos in English in the book "The Garden of the Holy Spirit: SAINT IAKOVOS OF EVIA" by Professor Stylianos Papadopoulos (208 pages): http://orthodoxwitness.org/the-garden-of-the-holy-spirit

Anthony 11/27/2017 11:06 pm
Finally some good news coming from Constantinople. Do we know what took the phanar so long to canonise Ayios Gerondas Iakovou Chalikis? Was he very busy with his mate Frank in the Vatican. Anyway, we have been rejoicing in Cyprus. Ayios Iakovos' spiritual son, Mitr Morfou Neofytos held an all-night vigil: