The Creed and the Trinity 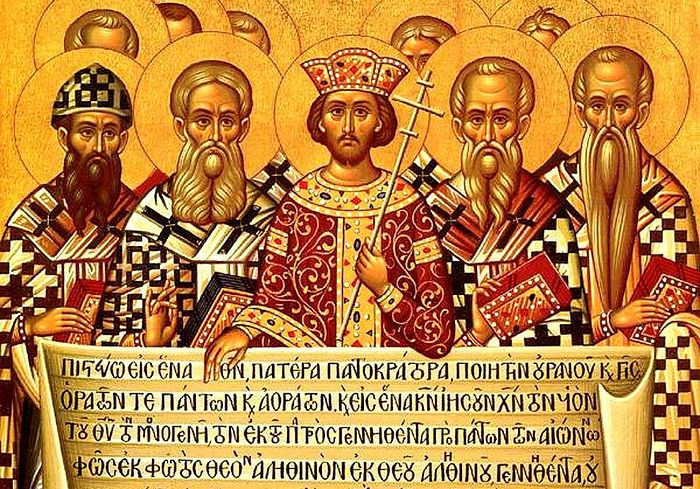 An Icon depicting the Emperor Constantine, accompanied by the bishops of the First Council of Nicaea (325), holding the Niceno–Constantinopolitan Creed of 381.

The Nicene Creed was not a new composition, but rather a refinement of previous baptismal creeds that had been in use since Apostolic times. The first known use of the term “Trinity” comes from about 180 A.D. from St. Theophilus of Antioch. It is possible that the word was actually used prior to that time, but the fact that it was not used in the baptismal creeds would suggest that these creeds predate the term. It should be noted, however, that the term was used to describe a belief that was already present.

The Apostles’ Creed, as it is commonly known now, has changed a bit since the time of the Apostles, but it gives us some idea of what earlier creeds were like:

“I believe in God, the Father Almighty, Creator of heaven and earth; and in Jesus Christ, His only Son, our Lord; Who was conceived by the Holy Spirit, born of the Virgin Mary, suffered under Pontius Pilate, was crucified, died, and was buried. He descended into hell; the third day He arose again from the dead. He ascended into heaven, and sits at the right hand of God, the Father Almighty; from thence He shall come to judge the living and the dead. I believe in the Holy Spirit, the Holy Catholic Church, the communion of Saints, the forgiveness of sins, the resurrection of the body and life everlasting. Amen.”

In the catechetical lectures of St. Cyril of Jerusalem we find the baptismal creed that was used in Jerusalem at that time:

“We believe in one God the Father Almighty, Maker of heaven and earth, and of all things visible and invisible; And in one Lord Jesus Christ, the only-begotten Son of God, begotten of the Father before all ages, very God, by whom all things were made; who appeared in the flesh, and became man of the Virgin and the Holy Ghost; was crucified and was buried; rose on the third day; and ascended into heaven, and sitteth on the right hand of the Father; and will come again in glory, to judge the living and the dead; of whose kingdom there shall be no end. And in one Holy Spirit, the Comforter, who spake in the Prophets. And in one baptism of repentance for the remission of sins; and in one holy Catholic Church; and in the resurrection of the flesh, and in life everlasting.”

If you compare these creeds, you find they follow a similar outline, which suggests that they have a common origin. At the Council of Nicea (the First Ecumenical Council), the big debate was about the proposed addition of one word to the creed: “homoousia,” which means “of one [or the same] essence”. Thus affirming that Christ is not some other being, but truly God in every respect. There were those who argued instead for the term “homoiousia,” which has only one iota added to it, but that one iota of difference changes the meaning of the word to “of similar essence”. There were also those who argued against both additions because by this time the older form of the Creed had been long in use, and this word was not found in Scripture, and did not have much of a history otherwise in the Tradition of the Church. However the insertion of this word expressed the faith of the Church that Christ was truly God, and not some created demigod, and so this is what the Council of Nicea affirmed.

But there is always a reluctance to change things that are so important in the life of the Church, and so the fact that the Nicene Creed used words to clearly reflect Trinitarian theology in response to the teachings of the Arians (who asserted that there was a time which Christ did not exist, and that he was a creature, and not truly God) was sufficient. And if you consider where you would have inserted the word “Trinity” to the Creed, it would have had to have been in the first line, but that was one line that no one disputed. Also, one could affirm the use of the term “Trinity” and yet still deny that Christ was fully God, and coexistent with the Father. The Creed, however, clarifies what we mean in precise terms.

The Creed of Nicea was further refined at the Second Ecumenical Council (the First Council of Constantinople), because there were then heretics who likewise disputed whether the Holy Spirit was really a distinct person of the Trinity, and so additional wording was added to the Creed to affirm that He in fact is. And so it was these two councils that provide us with what we now know as the Nicene Creed, which we use, not only at baptisms, but at every Liturgy, in in our daily prayers. Why is the Holy Trinity Essential in Orthodox Spirituality?
Fr. Dumitru Staniloae

Why is the Holy Trinity Essential in Orthodox Spirituality?
Deacon Charles Joiner
This is a difficult but important question. The foundation of our spiritual life is based on the nature of God, One God in Three Persons, The Holy Trinity. So why is this truth about God so important in the Orthodox understanding of Theosis, our aim to seek union with God? The True Science of God
Fr. Stephen Freeman
To recognize that the world is wonderful and larger than you know, is to begin to understand your place within it. You do not control it, nor can you ever. It is too frequently the case that people speak of God as though they knew very well what (who) they were talking about. Leithart and Emptying Nicaea of the Spirit
Gabe Martini

Leithart and Emptying Nicaea of the Spirit
Gabe Martini
Perhaps a classic analogy would be best served here: The Church is a seafaring vessel, churning through the tumultuous waters of this life. Many times, the Church must wade through dangerous seas, filled with depth charges, icebergs, and every sort of obstacle that the imaginations of Renaissance men and the cunning of the evil one can devise. And yet, despite these continuous assaults, the ship sails ahead, eventually leaving the controversies in her wake.
Comments

Rdr Andreas Moran12/1/2017 8:11 pm
It is difficult to understand Joseph Bell’s post. ‘Dry’ – but Christ’s Church is the living water. ‘Legalistic’ – what is legalistic about the article? ‘Strict’ – what does this mean? If it means the Church adheres to her dogma and doctrine, then she is strict, as a loving parent needs to be but strictness tempered by compassion. What is meant by ‘missing out’? On what? The Church possesses the fullness of the Truth which is Christ.

Joseph Bell11/30/2017 8:48 am
Without the Holy Spirit we have no Church. For you dry, legalistic, strict Orthodox Christians, I am afraid that you are truly missing out.
×