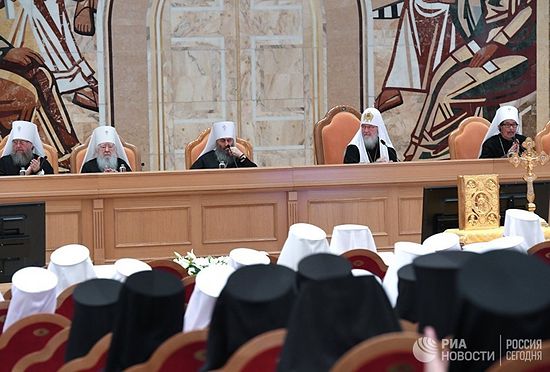 “It has been specified that the center of administration of the Ukrainian Orthodox Church is located in Kiev… The charter has enshrined that which already existed in practice,” the text broadcast of the Council of Bishops sessions reads.

In this regard, the Metropolitan of Kiev specifically proposed the creation of a separate chapter in the Russian Church statutes under the heading “The Ukrainian Orthodox Church.”

Metropolitan Onuphry’s proposal was accepted unanimously. However, as Patriarchal Press Secretary Fr. Alexander Volkov notes, the Ukrainian Church “was and remains a self-governing part of the Russian Orthodox Church.”

In addition to more correctly adhering to the reality of the Ukrainian Church’s existence, the revised statutes could also prove useful as the Ukrainian parliament considers bills aggressively aimed against the canonical Ukrainian Orthodox Church. Bill No. 4511, “On the special status of religious organizations with headquarters located in states recognized by the Verkhovna Rada of Ukraine as aggressor states,” proposes that such religious organizations be able to appoint metropolitans and bishops only in agreement with the governing authorities. The same bill also gives the government the right to forbid a confession if its representatives cooperate with religious centers in “aggressor states.”

The Ukrainian government considers Russia an aggressor state, and the schismatic “Orthodox” bodies in Ukraine play on anti-Russian sentiments to draw people into their folds. Russian Church hopes to resolve issue of Romanov remains in 2018
Among the many topics to be discussed by the hundreds of hierarchs currently gathered in Moscow’s Christ the Savior Cathedral for the Russian Orthodox Church’s Council of Bishops is that of the “Ekaterinburg remains,” which are believed by some to belong to the Royal Martyrs—Tsar Nicholas II and his family, murdered in Ekaterinburg on July 17, 1918.

Roman12/7/2017 2:34 pm
Does this mean that the Ukrainian Orthodox Church will be listed among the canonical Autonomous Orthodox Churches like the Finish Church, Church of Sinai, or among the Autocephalous-Independent Churches like that of Poland, Slovakia and the Czech Lands, even the OCA? Hardly! Everything remains the same as before and the Ukrainian Orthodox Church is still an integral part of the ROC - perhaps even more now than before. Read the changes in the Statutes.
×