The Most Childlike Feast

The feast of the Entrance of the Most Holy Theotokos into the Temple is known as the most childlike feast. Archpriest Oleg Stenyaev speaks on why this is so, and of what it reminds us adults. 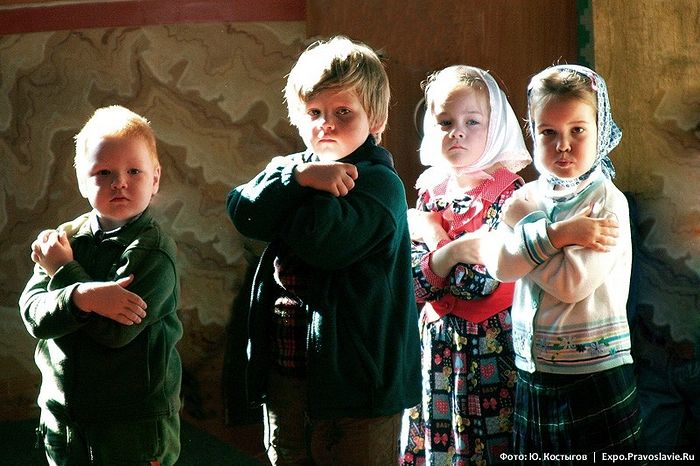 In the ancient understanding, religious life began in full measure at the age of thirty. Therefore, priests would begin their ministry at this age. By this age a man reaches maturity of mind and soul. Thirty is also the age of entering upon public service. Recall that St. John the Baptist began his preaching, and the Lord Jesus Christ also began to teach and proclaim the Truth at this age. Before this age, a man is considered not quite fully developed, not quite established, not quite understanding.

The feast of the Entrance of the Most Holy Theotokos shows us otherwise: The inner world of a child can be richer in a spiritual sense than that of an adult. Actually, the example of St. John the Baptist already speaks of this: He leapt with joy in his mother’s womb when the Most Holy Virgin Mary came to visit her relative Elizabeth. Think about it: A child in the womb knew the mother of the Savior. Thus, childhood is shown to be sanctified.

The first martyrs for Christ were also children—the Bethlehem infants. Blessed Theophylact writes about it. These infants were pure, having no personal sins, and their purity made possible their ascent to the heights of martyrdom. Therefore, the Church concludes: Not everyone is accounted worthy of a martyr’s crown—it should be for this inner purity, like that of an infant.

Recall how the apostles argued, asking, Who is the greatest in the Kingdom of Heaven? and then Christ placed a child before them, saying, Except ye be converted, and become as little children, ye shall not enter into the kingdom of heaven (cf. Mt. 18:1-4).

Now we’re in the Nativity Fast. The event of the Nativity itself also speaks about the holy purity of childhood. Why does God appear in our world as a little Child? Blessed Augustine offered this explanation: We are too mature in our sinfulness, in our complexes, in our bad habits. We are covered with the scab of sin—so thick that we no longer feel our sinfulness. But before the face of the Savior Who became a Babe, being the Pre-Eternal God, we tremble—and this scab cracks, and we begin to be aware of how sinful we are.

And the Mother of God—yet a child—does not just enter the Temple. Ponder this: She was led into the Holy of Holies—there, where no one had the right to go except the High Priest but once a year. But once a year! The High Priest would enter with fear, to celebrate the appointed rites, and leave with fear, because it was possible to not leave there, like the sons of Aaron: They were burned—Divine fire consumed them. It was punishment for having done wrong. And now the High Priest, under inspiration, leads this girl—child—into this sacred place. It is an image of the holiness of childhood. Childhood is a state of chastity, that is, purity—above all, purity from every evil impulse which is formed over time in the life of a man, beginning most often in childhood. Thus, it is said, “From my youth, many passions have fought against me.” But in childhood a man is still free from these passions. 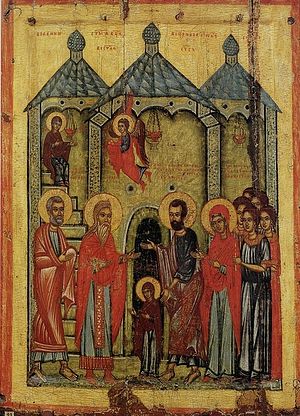 Entrance of the Theotokos into the Temple. 14th C. Russian icon. The State Russian Museum
The Entrance of the Theotokos into the Temple is also a symbolic action, because the sanctification of the Virgin Mary was from the womb of her mother—the holy fathers insist upon this. Orthodox do not confess the Immaculate Conception of the Virgin Mary, but we know that sanctification from a mother’s womb is possible. The Bible says this about several Old Testament prophets. The Virgin Mary was also sanctified from her mother’s womb. Thus, the Archangel Gabriel, appearing to her, greeted her with words, Hail, full of grace!

And later there were such pure souls that they felt God even before their birth, such as St. Sergius of Radonezh, who proclaimed glorification of the Holy Trinity from his mother’s womb.

Why is this feast, honoring the holiness of childhood, so important for us adults? So we would remember that we were once like angels. “Angel” in Hebrew is “kruph,” and in Aramaic “kruphya;” this word means “like children.” Exegetes explain that this is why the Cherubim are depicted with children’s faces. For the Jehovah’s Witnesses, all the angels have beards in their publications, thus emphasizing the angels’ muscularity and power, but in Church Tradition they are pure babes. Such an interpretation is based on the text of Scripture.

When Christ says, Become as little children, pointing to a child, His words can be translated as “Become as angels,”—after all, He spoke in Aramaic, using the word “kruphya.”

When things are hard for an adult, let him recall some bright moment from childhood, connected with a religious sensibility—perhaps his first religious experience. This remembrance will help him scrape away the scab of maturity in sin and feel a little like a child—a child of God—before the Creator.

Let us not forget the holy purity of childhood, and let us adore the Virgin, ascending to the Holy of Holies. A word on the feast of the Entrance of the Most Holy Theotokos into the Temple
Archimandrite John (Krestiankin)
The Old Testament Temple of God accepted into itself the seed of new life, the divine maiden in whom will spiritually sprout and grow the New, saving Covenant of man with God. The Old Testament Temple of God took into itself the sacred Ark of the New Testament, the animate temple of the Savior, the precious bridal chamber and Virgin—the sacred treasury of the glory of God. Archpriest Artemy Vladimirov on modern childhood education and instruction
Interview with Nun Cornelia (Rees)
When you enter a school auditorium for the first time, you must first of all be clear about the following: children are joyful, knowledge-loving creatures who look at the world (provided they have not been captivated by computer games—more on this later) with wide-open eyes. Therefore, every educator—and especially, every instructor of God’s Law—must have a fresh and sharp perception of the world, the ability to approach a subject from an entirely unexpected side.
Comments
×