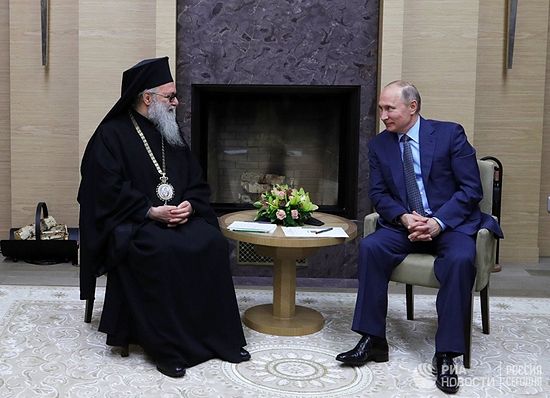 His Beatitude Patriarch John X of Antioch and All the East has urged the Orthodox Church to do everything possible to preserve Syrian unity, and thanked the Russian side for its fight against the spread of terrorism in the Middle East, reports RIA-Novosti.

The Antiochian primate spoke on Saturday at the solemn closing session of the Council of Bishops of the Russian Orthodox Church at Moscow’s Christ the Savior Cathedral. The meeting was also attended by heads and representatives of several other autocephalous Orthodox Churches.

“At a time when terrorism is in retreat thanks to the intervention of Russian soldiers, and there has appeared the prospect of a peaceful solution, we, as a united Orthodox Church, must do everything possible to preserve Syrian unity and to return Syrian Christians to their land, and for the restoration of ruined churches and monasteries,” the patriarch stated.

Addressing His Holiness Patriarch Kirill of Moscow, Pat. John thanked him for his peacemaking efforts in the Middle East and for the humanitarian aid rendered with the assistance of the Russian Church.

At a meeting with Pat. John earlier today, Pat. Kirill assured him that the Russian Orthodox Church is continuing to work with Russian authorities to ensure that humanitarian aid continues to reach Syria. He specifically noted that the Russian Ministry of Defense was developing a plan to support the patriarchal hospital in Homs, Syria, which was built by Russian forces. Over 2 tons of medical equipment were shipped to the hospital in May.

“We are eternally grateful for the labors and concerns of Russia for the destruction of terrorism, the establishment of peace, and the stability of Syria. We turn with particular gratitude to the president of the Russian Federation Vladimir Putin, to the army, to Russian political leaders, and to the people for Russia’s help in protecting our country from the spread of terrorism… in establishing peace and reaching a peaceful political solution to everything that is happening in our region,” Pat. John concluded.

The Antiochian primate also met with President Putin at his private residence yesterday evening, taking the opportunity to further discuss the situation in Syria. He again expressed his deep gratitude to the president for his assistance in Syria, and also for his interest in holding a personal meeting. Steve Cochran5/15/2019 6:37 am
Up until January 2017, President Putin was the only adult on the world stage trying to do the right thing outside of places like Syria. I'm certain that President Putin's Orthodox Christian faith guides him.
×