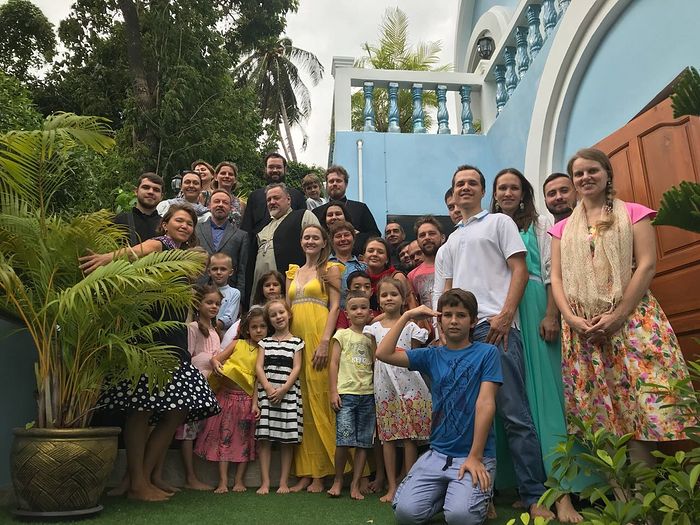 Bishop Anthony with the faithful of the Ascension Orthodox Church on Ko Samui Island. Photo: orthodox.or.th

Bishop Anthony of Zvenigorod, in Thailand on an archpastoral visit, consecrated on Sunday the first Orthodox church on the island of Ko Pha-ngan, in the Gulf of Thailand in the south of the kingdom, Russian Orthodox representative in Thailand Archimandrite Oleg (Cherepanin) reported to TASS.

The one-domed Church of St. Seraphim of Sarov was built over the past year and a half with funding from the faithful. The island is home to about 400 members of the Russian-speaking diaspora. In tourist season, typically during the winter months, the number rises to 2,000-2,500 people.

This is the second good news coming out of Orthodox Thailand in a week. Last Monday, two new books, a liturgical collection, and The Orthodox Church: History and Teachings by Bishop Alexander (Mileant), were published in the Thai language. The liturgical collection contains the order of services most often celebrated in Thailand parishes for Great Vespers, Festal Matins, the Hours, and the Divine Liturgy.

Ten Orthodox churches have opened in the past few years in Thailand, where 90% of the population is Buddhist, and the congregations include not a few local residents. There are two parishes near the Pattaya Resort, where the Russian community is most widely represented. There are other parishes on the islands of Phuket, Ko Samui, and Ko Chang, in the resort town of Hua Hin, and the northernmost church has been opened in the Chiang Mai Province. There is a monastery in the Ratchaburi Province, and a cathedral named in honor of St. Nicholas the Wonderworker was opened in Bangkok three years ago. Thailand to help restore King Rama V’s gifts to Nicholas II - Thai PM
The restored gifts will feature in an exhibition in Russia and Thailand.Facebook

Church Of St. Sergius Of Radonezh Consecrated In Chang Island, Thailand
The foundation of the church was laid in honour of the 700th anniversary of the Abbot of the Russian Land and, by God’s mercy and through persistent efforts of Russian compatriots to glorify this great man of God, the church has been erected in the anniversary year.
Comments
×