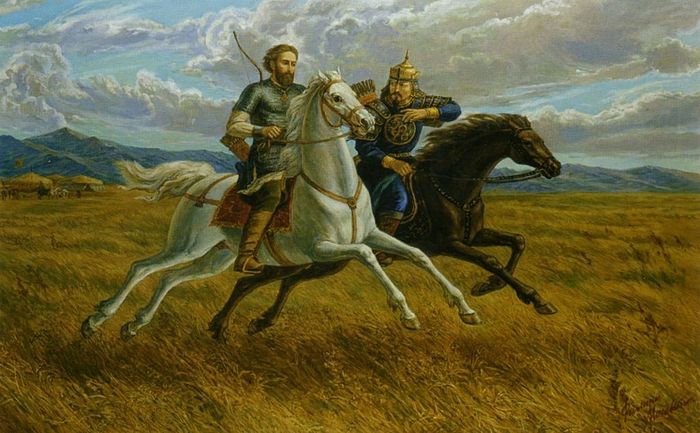 The Moscow Tatar Orthodox Christian Community will hold a moleben in both the Tatar and Church Slavonic languages today, as well as a panikhida for the Orthodox khans of Great Bulgaria, the Kipchak and Kimek Khanates, the Mongol Empire, the Golden Hordes, and the Tatar khanates and hordes. The service will be held at the Church of the Apostle Thomas, which was built by the martyred missionary priest Fr. Daniel Sysoev, reports pravoslavie.ru.

There is indisputable evidence that the founder of Great Bulgaria, Khan Kubrat, and his immediate family were baptized before the advent of Islam, as evidenced by Byzantine chronicles and excavation data. The tribes of Great Bulgaria are among the ancestors of the Tatars. The grave of Khan Asparukh, son of Khan Kubrat, contains a personal seal in the shape of a cross with his initials. A church now stands on the spot of his tomb. The tombs of both Khan Asapruhk, in Zaporozhe, and of Khan Kubrat in the Poltava Province of modern-day Ukraine are both revered Christian shrines today.

Additionally, the founder of the Golden Horde, Batu Khan, was, according to some historians, a baptized Christian. There is no doubt that his son, Khan Sartak, was a Christian. It is believed that other relatives were also Christians. The likely culprits in the death of Khan Sartak were the brother of Khan Batu and the Golden Horde leader Khan Berke, the first of the Tatar rulers to accept Islam, who killed him for his commitment to Christianity.

The Golden Horde is the main ancestor of all the Tatar people, including the Cossacks. Many Tatar khans were Orthodox Christians, including the great grandson of the leader of the Great Horde Khan Akhamat, Khan Sain Bulat Simeon Bekbulatovich (Stephen in monasticism), the Kazan tsarevich Utemish-Girei Alexander, the son of the Astrakhan khan Kasim, the Kasimov Khan Seid-Burkhan Vasiliy Arslanovich, and others. The last queen of the Kasimov Khanate Fatima-Sultan-Binem-Seitovna was strangled by her courtiers for her intention to become Orthodox. She is the grandmother of the canonized saint Tsarevich Jacob, and she helped a Kazan convent founded in the first half of the 17th century on lands given by the khan family. The martyred Fatima and other Tatar rulers are especially revered by Orthodox Tatars.

Moreover, a significant number of Bulgarian (Bulgar) Tatars are canonized as saints, including Martyr Abraham the Bulgarian, Peter of the Genghis Horde, Venerable Paphnuty of Borovsk, Martyr Peter of Kazan, Martyr Stephen of Kazan, the blessed Prince James, and others. Archpriest Vasily Timofeev and Fr. Daniel Sysoev and others are also venerated by the Orthodox Tatars.

The Moscow Tatar Orthodox Christian Community strongly supports the tradition of celebrating memorial services for their baptized ancestors, and is always looking for more historical information to expand the list of Orthodox names to be commemorated. Archaeologists Discover 10th Century Church, Coins Testifying About 1242 Tatar (Mongol) Invasion of Medieval Drastar in Bulgaria's Silistra
As a result the local archaeologists from the Silistra Regional Museum of History and their colleagues from the nearby cities have excavated dozens of buildings from the time of the Roman Empire, the Byzantine Empire, and the First Bulgarian Empire (632/680-1018 AD).