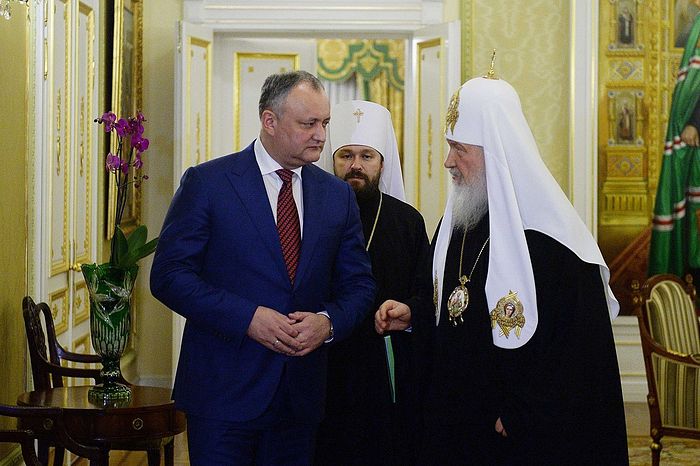 His Holiness Patriarch Kirill of Moscow and All Russia has accepted the invitation of President Igor Dodon of Moldova to visit the World Congress of Families which will be held in Chișinău in 2018, reports Foma.

The invitation came during a meeting at Moscow’s Danilovsky Monastery yesterday.

According to the site of the International Organization for the Family, the World Congress of Families “convenes major international public events to unite and equip leaders, organizations, and families to affirm, celebrate, and defend the natural family as the only fundamental and sustainable unit of society.”

“Patriarch Kirill accepted my invitation to visit Moldova on a pastoral visit and to take part in the World Congress of Families, which will take place in Chișinău in September 2018,” the Moldovan head wrote on his Facebook page after the meeting with the Russian Church primate.

“We talked about the need to protect and strengthen traditional family values in the countries of the Orthodox world. It is extremely important today, when traditional Christian values are being devalued,” Pres. Dodon wrote. He also stressed that Moldova is a stronghold of Orthodoxy and vanguard in the struggle for Christian values, with 97% of Moldovans identifying as Orthodox, and the Church being the most trusted institution in the nation.

“Orthodox people believe they can pass through all difficulties with hope and love for God,” the president also stated, according to the site of the Russian Orthodox Church.

President Dodon has often spoken about the importance of Orthodoxy and traditional values for Moldova. At a March meeting with the patriarch, he said, “I believe that without the Orthodox faith, without our traditions, Moldova has no future. Moldova needs a partnership with Russia; Moldova absolutely needs to preserve and strengthen our Orthodox Church. Indeed, we are now going through a very difficult period, but I am sure that with faith we will get through it all.”

He has also stated that Orthodoxy is a foundational and non-negotiable element of Moldovan life. In February of this year he rejected an invitation to attend an LGBT march; instead, he helped to create a number of events designed to support and strengthen traditional family values.

His Holiness will also visit various regions of Moldova, according to Dodon.

During the meeting, Pat. Kirll noted that his heart is very close to the pious Moldovan people, who live “with deep faith in their hearts.”

“We also know that Moldova is undergoing not the easiest of times in its historical development. What can the Church do in this situation?” the patriarch asked rhetorically. “The Church calls for all political processes to be carried out peacefully, that there would be no violence, and the people would not suffer,” His Holiness answered.

His Holiness Patriarch-Catholicos Ilia II of Georgia offered his blessing and gave the keynote address at the 2016 World Congress of Families event in Tbilisi. Fr. Josiah Trenham, pastor of St. Andrew Orthodox Church in Riverside, CA, also spoke at the Tbilisi event, outlining the rise of the LGBT movement, and how its beliefs, methods, and aspirations radically contradict the traditional wisdom of the world's philosophies and religions and seriously threatens the future of family and society. Junius Daniel2/13/2019 8:22 am
President Dodon is doing the very best job he can do, this in the face of an assault from The West which has every intention to destroy Moldavia, much as they have destroyed my North Carolina.

Anthony 12/27/2017 3:46 pm
El-Presidente seems like a good man, especially in comparison to the filth we have running our formerly Orthodox Hellenic lands. May God protect him. Every time someone like him appears, there follows the usual pattern of ''regime change'' courtesy of our masters in the west.