Orthodox faithful successfully blocked the route of Sunday’s LGBT parade in the Moldovan capital city of Chișinău, causing the march to come to an early end, reports Interfax-Religion.

The march was attended by several hundred people, including LGBT activists from the non-governmental “Gender-doc” organizations, representatives of civil society, and a number of politicians and journalists, including employees of embassies of a number of Western countries. Moldovan president Igor Dodon earlier turned down an invitation to join in the march, and spoke out against it, instead encouraging Moldovan citizens to take part in a number of activities in support of traditional family values, which also began on Sunday in Chișinău.

Participants planned to march 2 kilometers from Izmailskaya Street to the Palace of the Republic, but were blocked on Bucharest Street (one of the main streets in the city), less than halfway through the planned route, by several hundred Orthodox faithful. The Orthodox came out singing Church hymns, carrying banners and posters bearing inscriptions such as, “Moldova is an Orthodox country!” “Mama, Papa, and I—that’s a family!” and others in defense of traditional families. 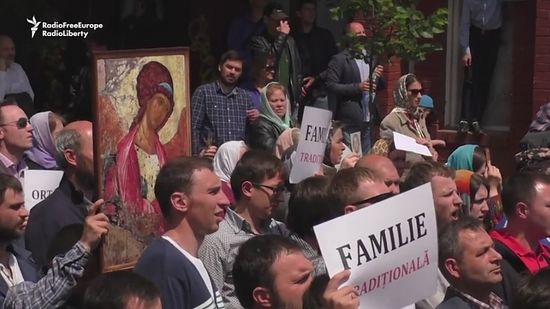 The police, who had been accompanying the marchers, quickly intervened to prevent any clashes. Several hundred police in helmets and riot gear stood between the two groups. After a few minutes it was decided to stop the march, and the participants boarded buses that had been prepared beforehand by the police, and which were also following the march.

President Dodon criticized again yesterday the activities being held as part of the LGBT community’s 16th “Moldova Pride 2017.” He stated that he strongly condemns the holding of the festival and the LGBT march. The head of state himself, together with his wife and three sons, participated in the traditional family-oriented events which took place on the central square of Chișinău. President of Moldova rejects invitation to participate in LGBT march
In response to the invitation, President Dodon is instead “initiating events in defense of traditional values.” Orthodox supporters of gay propaganda penalty thwart Moldovan parliament's meeting
The priests demanded that the amendments to the Moldovan Code of Administrative Offices, which abolished penalties for propaganda of homosexuality, pedophilia and sex outside of marriage, not be passed.
Comments

ACatharina5/22/2017 8:21 pm
Moldovans, don't let those fake human-rights international NGOs take over your country! They operate in many countries all over the world, causing great unrest and corrupting governements.

Anthony5/22/2017 3:20 pm
Why does george soros fund all these events but never take part in them himself? Weird. These marchers should claim asylum in western countries like england, sweden and france. They love all this kind of stuff so it would only add a bit more cultural diversity to the mix. C'mon.
×