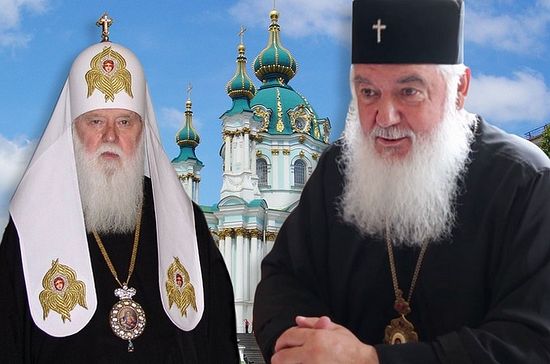 The head of the schismatic “Ukrainian Autocephalous Orthodox Church” (UAOC) “Metropolitan” Makarios held a meeting recently with a representative of the Ecumenical Patriarchate, His Grace Bishop Ilarion (Rudyk) of Edmonton and the Western Eparchy of the Ukrainian Orthodox Church of Canada. The official website of the UAOC reports that the meeting was “on the paths to the unification of Ukrainian Orthodoxy.”

A meeting between the self-styled “Patriarch” Philaret (Denisenko) of the schismatic “Kiev Patriarchate” and Bp. Ilarion, as well as Archbishop Daniel (Zelinsky) of the Ukrainian Orthodox Church in the USA, who had come to celebrate the schismatic leader’s name’s day, was also held on Dec. 15.

The “Kiev Patriarchate” and the “Ukrainian Autocephalous Orthodox Church” are two schismatic Orthodox bodies operating in Ukraine, while the canonical Church is headed by His Beatitude Metropolitan Onuphry of Kiev and All Ukraine.

Representatives of the Patriarchate of Constantinople came to Kiev and held a meeting with Met. Onuphry, Deputy Chairman of the Department for External Church Relations of the canonical Ukrainian Orthodox Church Archpriest Nikolai Danilevich reported to the Union of Orthodox Journalists. “They came to figure out the situation which developed after the recent letter of ‘Pat.’ Philaret to the bishops of the Russian Orthodox Church. This letter was a surprise for the Phanar,” Fr. Nikolai stated, referring to the Constantinople neighborhood where the headquarters of the Ecumenical Patriarchate are located.

“Pat.” Philaret addressed a letter to His Holiness Patriarch Kirill of Moscow and All Russia and the Russian Council of Bishops in November, expressing his desire to restore Eucharistic communion, asking that the anathematization against him be lifted.

“It is accepted that, being on the canonical territory of a Local Church, representatives of other Churches should do nothing without the consent of the local bishop. Clergy of other Churches must not forget that, despite the presence of a Church schism, the canonical territory of the Ukrainian Orthodox Church is not a public thoroughfare, where anyone can act according to his own discretion. On the contrary, compliance by the clergy of other Churches with the canonical order in the delicate conditions of our inter-confessional situation could even contribute to the normalization of the difficult situation with the Church schism in our country, or at least wouldn’t hurt,” Fr. Nikolai stated.

Fr. Nikolai also reminded that, despite the meetings with schismatics, the Ecumenical Patriarchate’s official stance in support of the canonical Ukrainian Orthodox Church remains unchanged, as was expressed in a recent meeting between His All Holiness Ecumenical Patriarch Bartholomew and Chancellor of the Ukrainian Orthodox Church Metropolitan Anthony of Boryspil and Brovary along with Fr. Nikolai. Jerusalem Patriarch calls all to unity, condemns schism in Ukraine
Patriarch Theophilos of Jerusalem spoke on Pentecost Sunday at the patronal feast of the main church of the Moscow Patriarch in the Holy Land, the Holy Trinity Cathedral in Jerusalem.
Comments

Joseph1/17/2018 10:12 pm
Quartermaster: An explanation: The Orthodox Church does not work that way. Metropolitan Onuphry is a servant of the canonical Church, given the obedience to lead it. He does not "have a problem"--the problem is with those who break off from their Church. The UAOC has been around since 1922. It is not to be confused with the "Kiev Patriarchate," headed by Philaret Denysenko. A supposedly authocephalic church that has been around for so long without being recognized by any other canonical Orthodox Churches is not going to be recognized by default. The faithful of the canonical Church want to be with Christ, not with a political leader. The Church is the body of Christ.

Quartermaster1/17/2018 9:49 pm
The Metropolitan Onuphry of Kiev has a very serious problem. He is subordinate to a foreign body, The Russian Orthodox Church, which has taken political positions against the Ukrainian State and has acted favorably towards Russian interference and invasion of sovereign Ukranian territory. As long as the situation in Crimea and the Donbas exists, the move towards an autocephalic Ukranian Church will continue and will be recognized by default. Kirill's corruption is the major motivation for the split and the split may well have already taken a life of its own.

Ukraine exists as an independent country. It's long past time that their Church be recognized as autocephalic.

Anthony12/30/2017 4:14 pm
I'm slightly confused. A few weeks ago the phanar and his cohorts were saying that this schism should be resolved spiritually. Now they act against the canons. Do we know what the phanar. Does the phanar know what he wants. Perhaps we need to follow the trail backwards to find out who is coordinating all this divisive behaviour. Not too hard to figure out. Usual suspects and their father. The one of lies.
×