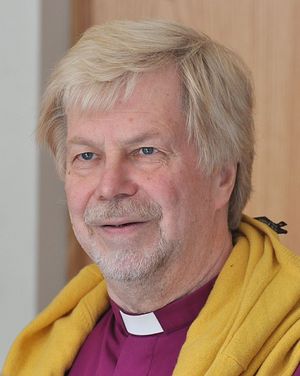 Risto Jääskeläinen was born August 10, 1945, in Tohmajärvi, Finland. He studied theology in Finland, America, Hungary, the United Kingdom, and the Soviet Union. He was tonsured as a monk with the name Ambrose and ordained as a hierodeacon and hieromonk in 1979 as a member of New Valaam Monastery. He was elevated to the dignity of archimandrite in 1986, and was consecrated as the bishop of Joensuu in 1988. He later served as the Metropolitan of Oulu from 1997 to 2002, and as Metropolitan of Helsinki from 2002 to 2018.

The announcement of his retirement came as a surprise for all. He had shown no signs of slowing down, and on the contrary, the hierarch had lately taken an active role in public discussions and on social media. His typical answer the past several years to birthday greetings had been, “Age is advancing, but we won’t give up!”

“In most Orthodox countries, hierarchs bear their ministry until death. In our society, hierarchs have the right to retire, and we already have a precedent—Metropolitan Panteleimon retired, being younger than me. I believe that a bishop, or a priest, can serve the Church in many ways, even in an unofficial capacity,” remarked Met. Ambrose.

“Now is the time for others to take full responsibility,” he added.

As the Finnish Church site notes, throughout all the years of his ministry, Met. Ambrose was criticized for neglect of Orthodox Tradition, excessive pedaling of ecumenism, and liturgical creativity. His close association with representatives of the world of business, politics, and media also evoked reprimand.

A scandal erupted in March 2015 when Met. Ambrose invited a female bishop of the Lutheran Church of Finland, Irja Kaarina Askola, into the altar during an ordination during a Divine Liturgy at the Dormition Cathedral in Helsinki, and ordered the deacons to commemorate her during the litanies. The act was condemned by Archbishop Leo (Makkonen) of Karelia and All Finland and later by Ecumenical Patriarchate Bartholomew himself, although Met. Ambrose remained obstinate that he had done nothing wrong, in the spirit of ecumenism.

While in retirement, His Eminence intends to continue working with Church foundations, to participate in public discussions in different forums, and to spend more time writing. John1/2/2018 8:20 pm
I'm confused why this man was never excommunicated for his anti-Orthodox decisions and behavior. The "Finnish Orthodox Church" has even done what no other modernist local Church has done - celebrate Pascha on the Gregorian Paschalion. They seem to be quasi-schismatic to me. Why are bishops allowed to violate Orthodoxy in such gross and blatant manner and never be held accountable for their actions?
×