Icons captured by terrorists being returned to Syria 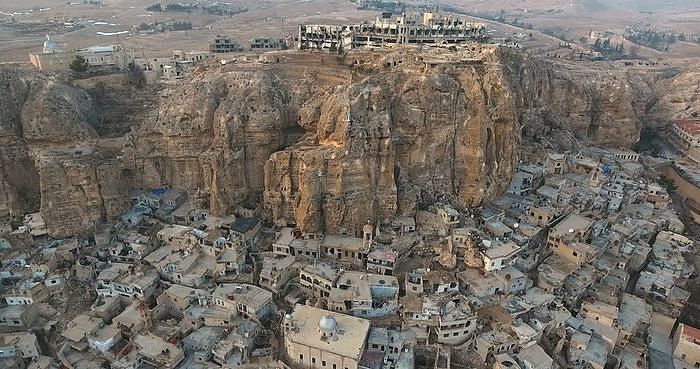 Icons that had been stolen by terrorists are being returned to the churches of the Syrian city of Maaloula, city administration representative Joseph Capladin announced on Sunday, reports Interfax-Religion.

“Five icons are located at the patriarchate in Damascus; three have already been returned to our churches. The icons were intercepted in a town on the Syrian-Lebanese border, where militants had taken them to be sold on the black market,” he reported.

Maaloula is a small city, located in a picturesque valley 30 miles to the north of Damascus. It is one of the few places left in the world where everyone speaks Aramaic, the language of Jesus Christ. The churches of Maaloula include, among others, the Monastery of St. Sergius, the Monastery of St. Thekla, and also the Church of St. Elijah, where services have already resumed since the city’s liberation from terrorists in April 2014.

ISIS invaded the small town on September 5, 2013, going on a rampage against Christian people and buildings, destroying all holy sites in the city. 3,000 fled the city, leaving only Muslims and the forty nuns of St. Thekla’s Monastery, twelve of whom were kidnapped by ISIS in early December of the same year. The nuns were released in March, 2014.

Work on restoring the city’s churches that had been plundered by Al-Nusra militants was accelerated thanks to the creation of a de-escalation zone in Syria. The ceasefire, the observance of which is controlled by Russian military police, allowed for the delivery of building materials to Maaloula at an accelerated pace, according to Capladin. Churches of Ma'loula looted by militants being restored in Syria

Churches of Ma'loula looted by militants being restored in Syria
The Ma’loula church complex, looted by Islamic militants, is being restored at an accelerated speed. One of the churches is expected to be ready for parishioners in the near future. All shrines of Ma'loula either destroyed or desecrated
A radical Jabhat al-Nusra "opposition" group, which occupied the small Christian town of Ma'loula in Syria in the last months of 2013, desecrated absolutely all shrines of the town.
Comments
×