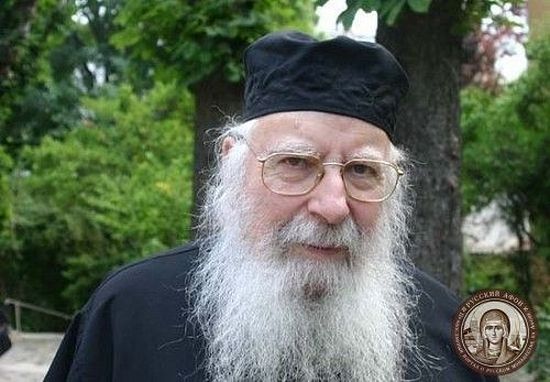 The famous Orthodox patrologist and theologian and founder, abbot, and spiritual father of four podvoriyes of the Athonite Simenopetra Monastery in France, Archimandrite Placide (Deseille) reposed on January 7, the day of the great feast of the Nativity of Christ, reports Russian Athos.

Archbishop Job (Getcha) of Telmessos (Ecumenical Patriarchate), a spiritual child of Fr. Placide who was tonsured at one of the Simenopetroa podvoriyes, reports that Schema-Archimandrite Placide reposed on January 7 at 1:00 PM in the hospital. Fr. Placide went to the hospital on January 5 due to suffering from acute pneumonia. His burial will take place today at the Monastery of St. Anthony the Great in Saint-Laurent-en-Royans, France, one of the podvoriyes of Simenopetra Monastery. The aforementioned Abp. Job will take part in the funeral and burial services.

Archimandrite Placide (Deseille) was born into a Catholic family in France in 1926. He entered a Cistercian Abbey at the age of 16 in 1942, and later received his higher education in Rome. In 1966, in search of the authentic roots of Christianity, he founded a monastery of the Byzantine Rite in Obazine, France.

In 1977, the monks decided to enter the Orthodox Church, inspired by their communication with Elders Paisios the Athonite, Ephraim of Katounakia, and Amilianos of Simenopetra. Their conversion took place on Mt. Athos on June 19, 1977. In February of the following year they became monks of Simenopetra Monastery. During his time there, Fr. Placide translated The Ladder of Divine Ascent of St. John Climacus into French.

Having undergone monastic formation, Fr. Placide returned to France with Elder Amilianos’ blessing, where he founded four podvoriyes for Simenopetra, the chief of which was the Monastery of St. Anthony the Great in Saint-Laurent-en-Royans.

Archimandrite Placide also taught Patrology at the St. Sergius Institute in Paris, and is the author and translator of many books on Orthodox spirituality and monasticism. Abbot of Ksilourgou Skete on Mt. Athos reposes in the Lord Abbess Barbara of St. Theodore Monastery reposes in the Lord