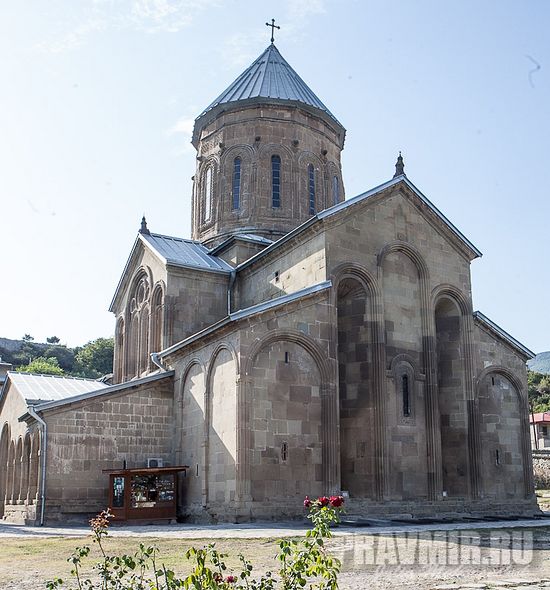 The Samtavro Church of the Transfiguration and Convent of St. Nina is located at the confluence of the Mtkvari and Aragvi Rivers. The monastery is under the jurisdiction of the Catholicos-Patriarch of All Georgia and Archbishop of Mtskheta and Tbilisi Ilia II. In older sources, Mtskheta is called the Second Jerusalem.

The conversion of Georgia (Iberia) is closely connected with the Cappadocian virgin and Equal-to-the-Apostles St. Nina, who brought together the Georgian people and led them to God. 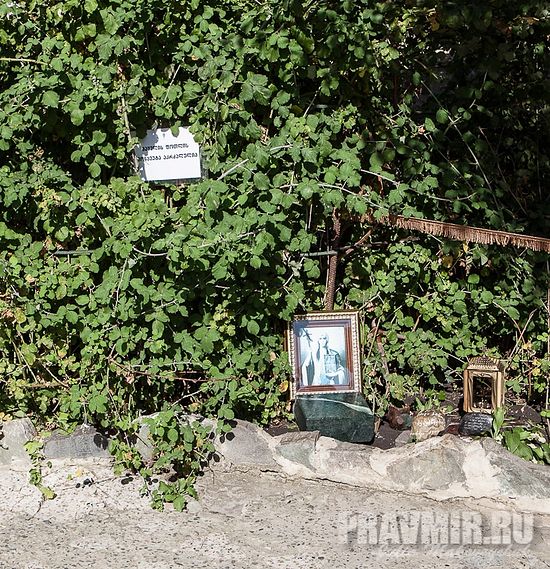 The blackberry bush of St. Nina

The blackberry bush where St. Nina preached Christianity, the light of which illumined all of Georgia, leading to Christianity being declared the state religion in 324 in the days of the holy King Mirian and Queen Nana, is located in this place.

The blackberry bush of St. Nina, as a source of spiritual grace, finds a counterpart in the Bible in Moses’s burning bush. In the words of His Holiness and Beatitude Patriarch Ilia of All Georgia: “St. Nina followed the Divine path of St. Andrew the First-Called and Simon the Canaanite, or the road of roads for every Georgian, that path is the Light of Christ.”

It is known that Samtravo was the center of Christian ecclesiastical life and spiritual labor throughout the centuries.

In the Georgian Chronicles, the sainted King Mirian says, “I built a church by this blackberry bush (meaning the small church in Makvlovani), and I built the upper church (Samtavro) for myself and the Georgian people, because the lower church (Svetitskhoveli) is called the Holy of Holies and I never dared to touch its holy doors.”

After St. Nina’s repose, the Equal-to-the-Apostles King Mirian, having returned from Bodbe, desired to build the Samtavro church: “The king and all the people went and built the upper church out of stone and finished it in the fourth year.” The participation “of all the people,” the desire of the king, and the four years of building are a sign that the church was quite large. 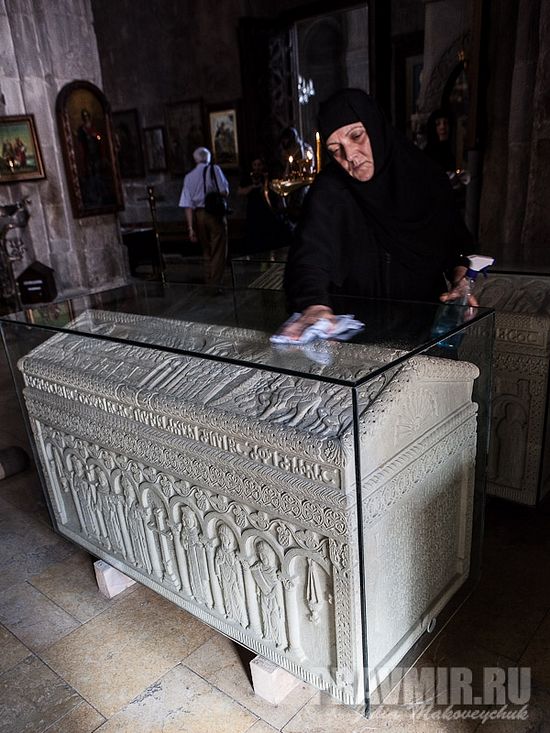 Tomb of Sts. Mirian and Nana

According to the testimony of Vakhushti Bagrationi,[1] “Mirian built a magnificent church with a stone dome and was himself buried there.” The Church of Samtavro became a sepulcher “and Mirian was buried to the south of the middle pillar, and in the fourth year Queen Nana died and was buried to the west of the same pillar where the king was buried.”

Due to the fact that the holy monastery became from the day of its foundation the burial place of the primates of the Church, it is called “Samtavro” [Meaning “principality” or “princedom.”—Trans.]. From the surviving chronicles, it is obvious that, thanks to large donations, the church was one of the richest in Georgia.

In the first half of the twelfth century, during the reign of George I, the church was expanded, the south gates were attached, and it was decorated with original ornamentation by decree of Catholicos Melchizedek. The church interior was also embellished.

After King Mirian, the Transfiguration Church was repeatedly destroyed and rebuilt. The church was restored under Kings Archil and Vakhtang Gorgasalis during the reign of Catholicos Melchizedek, etc.

In the second half of the nineteenth century, in the time of the exarchate, the church was renovated by the abbess of the St. Nina Monastery, Nino Amilakhvari. A church school for girls was also founded (a four-classroom primary school), which was later transferred to Tbilisi. According to Iakob Gogebashvili,[2] “In this monastery school, many Georgian women were given a true Christian upbringing, a good education, knowledge of a handicraft, and wonderful, cultivated parents—true mothers.” 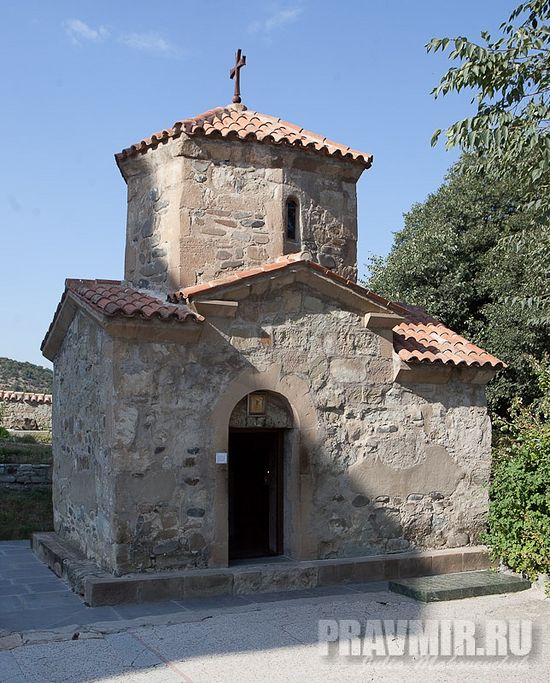 The little Church of St. Nina 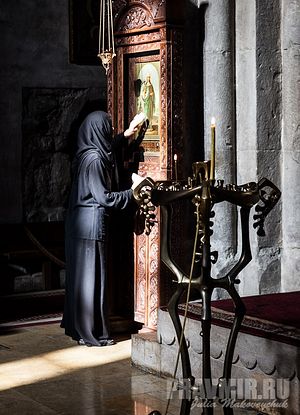 A nun by the icon of St. Nina
The church is cross-shaped, framed by the original ornamentation, which is unique in Georgian architecture. The cylindrical tower was built in the eighteenth century, and the bell tower in the fifteenth to seventeenth centuries.

There are many sacred objects in Samtavro Church: part of the Life-Giving Pillar,[3] the wonderworking Iveron Icon of the Mother of God which reads “Holy Iveron Georgian Monastery 1919,” the wonderworking icon of St. Nina donated from St. Petersburg by King George XII to his grandchildren in 1870, the graves of the holy King Mirian and Queen Nana, the holy relics of St. Abibos of Nekresi under the holy altar table, the relics of St. Shio Mgvime, part of the stone from the grave of St. Nina from Bodbe, and others.

[1] Vakhusthi of Kartli was an eighteenth century Georgian prince, geographer, historian, and cartographer, known for his works Description of the Kingdom of Georgia and the Geographical Atlas.—Trans.

[3] The pillar on which Christ leaned as He was beaten before His Crucifixion.—Trans. “I Feel Warmth Coming From Some People”
Mother Mariam (Mikladze)

“I Feel Warmth Coming From Some People”
Olga Rozhneva, Mother Mariam (Mikladze)
We’re walking around the center of old Tbilisi—the abbess of the Monastery of the Transfiguration of the Lord, Matushka Mariam (Mikladze), is waiting for us to come. “Hope is a walking dream” – Mesmerizing footage from Alaverdi Monastery

“Hope is a walking dream” – Mesmerizing footage from Alaverdi Monastery
The Alazani river valley in Georgia’s Eastern region of Kakheti features the magnificent monastery of Alaverdi built in the sixth century by one of the 13 Assyrian monks, Ioseb Alaverdeli. From the eleventh century the Alaverdi monastery turned into the Episcopal center and residence of the head of the Eparchy. The current Saint George church was built in the eleventh century by king of the Kakhetians, Kvirike, on the place where the former, smaller church had stood. Starting from the same period, the monastery became the ancestral cemetery of the Kakheti royal house.

Georgian Orthodox Church is supported by 91% of respondents
Results of the new survey research carried out by the International Republican Institute (IRI) in Georgia have been published.
Comments

Jonathan1/29/2018 12:40 pm
In the final paragraph, you could add that the grave of St Gabriel Urgebadze is in this church, a very important pilgrimage place.
×