St. John Chrysostom and His Liturgy 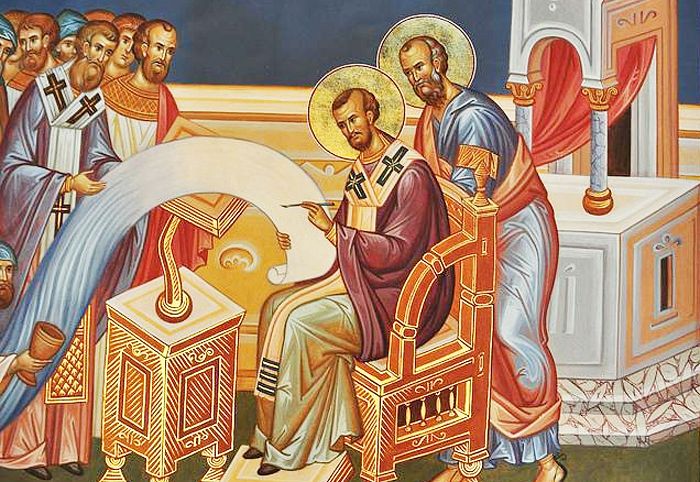 Today is a day of special joy for all of us. Today we are commemorating a great saint of the Church of Christ, a disciple and follower, a Doctor of the Church, a prominent ascetic, a theologian and preacher—the Holy Hierarch John Chrysostom (“Golden-Mouthed” in Greek).

This man devoted his entire life, all his great gifts and talents bestowed on him by the Almighty, to the service of his Divine Master, our Lord Jesus Christ, to the formation, protection and building of the Holy Church, to the strengthening of this Divine organism and guarding it against heresies, schisms and false doctrines.

After losing his father in his youth, all he had was his mother and the saint committed himself to studying the supreme knowledge of the age—among his teachers were both philosophers and Christian ascetics. When his mother departed this life, St. John gave away all his worldly possessions and retreated to the desert for spiritual labors where he lived with fellow hermits, friends and brothers in Christ for many years. He fought his spiritual warfare in silence, fasting and praying, striving to avoid the glory and honor from human beings and even the Church ministry that was being prepared for him. However, the holy man could not avoid that ministry for long; though he had already performed many podvigs [“spiritual labors” in Russian] and written excellent apologetic works by that time, the Church called him to a higher ministry and he was chosen to serve as a bishop. And with time he was elected to the See of Constantinople. And there he continued to teach people of God with love and meekness, to build and organize the Church, and live in holiness.

This man left a great many writings after him and indeed very few ascetics can rival him in this. He was an apologist, a commentator of the Holy Scriptures at the same time, wrote treatises on various themes, some of which are read at Church services (in accordance with the Church canons) on a number of occasions to this day. Let us recall his wonderful Paschal Homily that is still read at the service of Pascha Sunday in Orthodox churches all over the world. And he wrote a huge number of such works. Yet perhaps his principal work is something that all of us participate in and that plays an important role in our salvation—that is, the Divine Liturgy of St. John Chrysostom.

The holy hierarch was not its actual author—some holy men had been composing and developing it for years and even centuries before him; but he “edited”, renewed and amended the Liturgy, knowing by his personal experience what was necessary for both the Church and man (who longs for salvation despite his weakness). And since that time, since the fourth century this Liturgy has been celebrated in almost all languages of the world. To be more exact, the Divine Liturgy of St. John Chrysostom is served in all the languages in which Orthodoxy was preached in the world, and it is this Liturgy that brings us together before the chalice with the Holy Body and Blood of Christ for most of the year.

The Divine Liturgy is the most important service of the Church and the most significant event for people who were baptized and received “the promise of salvation” (words from the baptismal service); it is the sacrament of partaking of the Holy Body and Blood of Christ that takes place during the Divine Liturgy.

And we are overcome by terror seeing that very many Christians still fail to understand it and have not been able to realize this fact. And we make too little effort to ensure that all people in the world know about the crucial importance of active participation at the Divine Liturgy for the salvation of souls. Nothing can be higher, stronger and more vital than gathering together on that day, and meeting our Lord Jesus Christ, and becoming united with Him in prayer as well as the sacrament of Holy Communion.

St. John Chrysostom also spoke much about the sacrament of Holy Communion. According to him, in the Eucharist we become united with Christ and thus become like a body that is united with its Head. In other words, he who does not partake of the Body and the Blood of the Savior cannot be a Christian and human being in the full sense and is like a headless body. Therefore, we form the Body of Christ, while He is our Head. We partake of His Divine Blood by which He washed away our sins and redeemed this world, and today He is offering us this Blood so that we can become intimately and completely united with Him. When someone loves some thing, some person or some phenomenon in this world, he strives to be united with them, to be one with them, as it were. Likewise, Christians are called to strive for a closely knit union with the Savior in the Sacrament of Holy Communion. On the one hand, it is so simple; and on the other hand, it is incomprehensible and requires humility and love, meekness and obedience to the Church of Christ similar to the obedience that “the Divine teacher” demonstrated throughout his life and preached the Truth and salvation with his “golden mouth”.

St. John Chrysostom said that during the Divine Liturgy streams of the Divine Truth flow from the altar as from Paradise, and holy angels gather at these streams just as deer gather by a vivifying water source in the desert. Thus angels, archangels and saints gather, as do we, joining them at this source in order to absorb the Divine Truth and become stronger, so that our souls, exhausted and withered in the desert of sin, scorched by the arrows of devil, might be impregnated with this Divine water—the Blood and Body of Christ—and could live on and abide in eternity, and ever remain with Christ and all saints. St. John Chrysostom also gave us an image of the Christians who are allowed by God to partake of His Body.

St. John said that after partaking of the Body and Blood of Christ, Christians become like lions breathing fire and appear fearful to the devil, and so all his demons disperse in terror. Thus we, Christians, are given such an invincible power and grace! And St. John Chrysostom devoted so much energy and strength, suffered so much with the view of bringing this truth to our notice, for we are deaf, disobedient, indecisive, faint-hearted, but nevertheless seeking salvation. Receiving the Body and Blood of Christ, let us give praise unto our God and Savior Jesus Christ, the Maker of heaven and earth, along with great saints, including St. John Chrysostom, through whose prayers may the Lord have mercy on us and save us; for He is good and the Lover of mankind. Amen.