The most unique feature of the Church 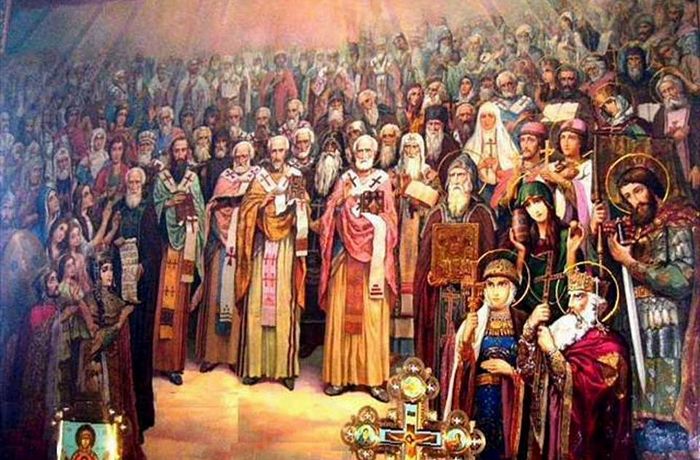 Apostle Paul told us about the ability of the Church to form itself. What does he mean? Paul writes that God gave some, apostles; and some, prophets; and some, evangelists; and some, pastors and teachers; For the perfecting of the saints, for the work of the ministry, for the edifying of the body of Christ; Till we all come in the unity of the faith, and of the knowledge of the Son of God, unto a perfect man, unto the measure of the stature of the fulness of Christ. (Eph. 4:11-13).

Let us focus on the words, “For the perfecting of the saints, for the work of the ministry, for the edifying of the body of Christ”. They mean that God gives Christians the right and authority to participate in the edification, the formation of the Church, the body of Christ. Without altering its essence, the Church can with time make some changes to the external aspects of its existence.

Let us review the following example: an acorn falls on the ground, takes root and grows to become a big oak tree. Is this oak tree an acorn? By nature, it is, because it sprouted from an acorn. However, outwardly the oak tree looks nothing like an acorn. Similarly, the Church, while preserving its theanthropic nature, may have a somewhat different appearance at different times and in different countries.

For example, the Orthodox worship service today is different from the service held in the early centuries of Christianity. However, in essence, the service is exactly the same. Figuratively speaking, the seeds sprouted and turned into beautiful branching trees.

Speaking more specifically, early Christians performed the Liturgy at night and did not fast before receiving the Holy Gifts. That was what happened in the Cenacle on Mt. Zion. At night, the apostles ate the Passover meal and only after that they received Holy Communion. Nowadays, we perform the Liturgy in the morning and fast before receiving the Holy Communion. Does it mean that we are breaking the evangelical rules? No. At some point this approach was adopted by the Church as it has the right to make such decisions. Christ gave it the power to form itself. Continuing to remain the true Church, it can alter some minor aspects of its life as necessary. Whether we perform the Liturgy at night or in the morning, its essence does not change.

In the above verse Paul mentions pastors and teachers. Interestingly, pastors and teachers are raised by the Church so that they, in their turn, would later guide and edify the Church. Here again we see the God-given ability of self-formation and self-renewal. It should be noted that the Church cannot be re-created or, as Protestants believe, re-founded. It is funny to hear some charismatics say, “Recently we went to some place and founded a Church there…” You cannot create or found the Church—you can only join it! It is already created by the One Who said, I will build my church; and the gates of hell shall not prevail against it. (Matthew, 16:18). It has already been founded and only this Church is true. Christ granted it the power and authority to renew and restore itself with God’s help.

In addition to pastors and teachers, Paul mentions apostles, prophets and evangelists. One may ask, “Where are the apostles, evangelists and prophets today? Did the Church stop being true, did it lose something it used to have?

No, it didn’t lose anything. Yes, the apostles lived only in the first century. In this sense, apostleship is a special and unique gift, as it was bestowed only once in the course of history. However, the Church always had the equal-to-the-apostles saints, that is the people who continued the apostolic ministry, like equal-to-the-apostles St. Nicholas of Japan, who lived not so long ago. The apostles lived in the first century and died like all people do, but the apostolic ministry in the Church lives on.

Do we still have prophets? The word “prophet” must be understood in the biblical context. In the Bible, a prophet is a man who imparts the will of God and perceives the events of the past, present and future in a truly spiritual way. The word “prophet” is related to the verb “to prophesize”, which means to state the will of God. In general, a prophecy is a true preaching about God. As such, a true Christian preacher is, in essence, a prophet. Are there any preachers in the Orthodox Church? Yes. They were always there.

Evangelists are not only those who wrote the Gospel, but also those who profess it. That was how John Chrysostom interpreted this passage. Do we have such evangelists? Yes. And we will always have them.

The Church has everything, including apostles (in the meaning described above), prophets, evangelists, pastors and teachers. However, one must think about it correctly, seeing the acorn behind the lavish crowns of wide-branching oak tree. The Church is the same and it still fulfils its purpose on earth, bringing everyone to “the unity of the faith, and of the knowledge of the Son of God, unto a perfect man, unto the measure of the stature of the fulness of Christ.” I hope to God that it would happen to us. May God grant that we should live and receive our salvation in the Church, where God “gave some, apostles; and some, prophets; and some, evangelists; and some, pastors and teachers; For the perfecting of the saints, for the work of the ministry, for the edifying of the body of Christ.” What is the Church?
W. J. Lillie