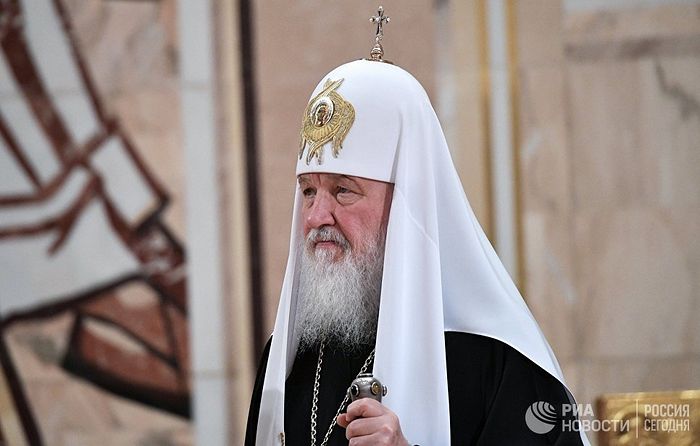 His Holiness Patriarch Kirill of Moscow and All Russia arrived in the capital of Bulgaria today on an official visit timed to the celebration of the 140th anniversary of the country’s liberation from the Ottoman yoke. He was met at the airport by Vice President Iliana Yotova, the Russian ambassador to Bulgaria, and several hierarchs of the Bulgarian Orthodox Church, reports RIA-Novosti.

“I’m very glad to enter the hospitable Bulgarian land, to meet my brother Patriarch Neofit and the Bulgarian people, with whom the Russian people have a very special spiritual connection; and our Churches are the spokesmen for this connection. Much is changing in the world, the political makeup is changing, politics itself, but those ties by which the Churches unite people overcome the changes of time,” said the primate of the Russian Orthodox Church.

He added that he arrived in Bulgaria with “a very bright sentiment” and rejoices at the upcoming meetings.

During his visit, Pat. Kirill will take part in commemorative events to honor the memory of the soldiers who died for the liberation of Bulgaria in the Russo-Turkish War of 1877-1878, and will serve a moleben in the memorial Church of the Nativity of Christ in the central Bulgarian town of Shipka.

The Russian Empire led an Orthodox coalition, consisting of Bulgaria, Romania, Serbia, and Montenegro, against the Ottoman Empire in the Russo-Turkish War, leading to the formal proclamation of independence of Romania, Serbia, and Montenegro, and the re-establishment of the Bulgarian State after nearly five centuries (1396-1878) of Turkish oppression.

March 3 marks 140 years from the signing of the San Stefano Peace Treaty which brought an end to the war and laid a foundation for the future development of the independence of the Bulgarian state. This day has been a national holiday since 1991.

One of the main organizers of the anniversary events is the national committee formed in May last year under the patronage of President Rumen Radev and consisting of several representatives of government agencies, public organizations, the media, clergy, and scientific and cultural figures.

Commemorative events will be held in various cities throughout the country with the active participation of Russian politicians, public figures, and diplomats. From February 25 to March 5, under the aegis of the Russian Ministry of Culture will be held the Days of the Spiritual Culture of Russia and Bulgaria. The program of events includes a conference dedicated to the liberation anniversary, a multimedia exhibition of icons from the collection of the Russian State Museum in the Russian Cultural-Information Center in Sofia, and performances of the Moscow Synodal Choir. Patriarchs Neofit and Kirill to concelebrate for 140th anniversary of Bulgarian liberation from Ottoman yoke
The Russian Empire led an Orthodox coalition, consisting of Bulgaria, Romania, Serbia, and Montenegro, against the Ottoman Empire in the Russo-Turkish War, leading to the formal proclamation of independence of Romania, Serbia, and Montenegro, and the re-establishment of the Bulgarian State after nearly five centuries (1396-1878) of Turkish oppression.
Comments
×