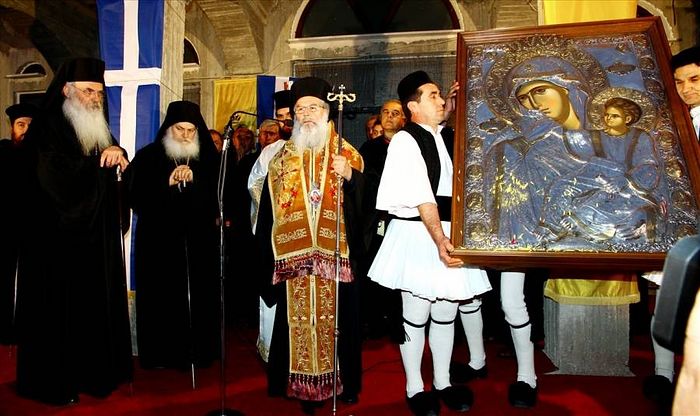 The Sacred Community of holy Mt. Athos has declared its stance against the large-scale practice in recent years of creating exact copies of the many wonderworking icons that are treasured on the semi-autonomous monastic republic which are then “enthroned” in various dioceses and parishes, reports the Bulgarian Orthodox site dveri.bg.

On February 15, the Holy Mountain administration sent a letter to all monasteries and sketes “to show restraint and to avoid such activities,” according to a decision of the Community made last year. The issue will soon be taken up by a double Synaxis on Mt. Athos for a final decision.

The reason for the decision is the increasingly acute criticism of the practice, which has become a sort of fashion in recent years. Greek media suggests the leading proponent of the practice to be the abbot of Vatopedi Monastery Archimandrite Ephraim who often accompanies the copies to different cities throughout the country.

Critics believe the motivation for making such copies is not spiritual, but financial. The arrival of the icons is often accompanied by an announcement to the faithful that a “true copy of a miraculous icon” is coming, and the icons are met nearly with state honors and noisy celebrations, they say. There have been nearly 30 such “enthronements” in the past five years, with large sums paid by wealthy businessmen.

This leads to the profanation of icon veneration, critics believe, and gives rise to accusations of avarice and taking advantage of the religious sentiments of the faithful.

Two Athonite abbots have exchanged sharp open letters on the issue recently—testimony that the issue is a painful one for the Holy Mountain. The fiery and outspoken Archimandrite Gregory, abbot of Dochariou Monastery, publicly condemned the practice of Abbot Ephraim of Vatopedi of traveling around the country with copies of miraculous Athonite icons. Abbot Ephraim responded that the icons were requested according to canonical norms, and that everything happened with the consent of the local bishops. Moreover, he himself receives no personal benefit from such trips. Abbot of Vatopedi speaks about miracles and invisible elders of Mt. Athos

Abbot of Vatopedi speaks about miracles and invisible elders of Mt. Athos
Archimandrite Ephraim, the abbot of the Athonite monastery of Vateopedi, recently spoke about how Athonite monks often radiate the Uncreated Light of God and why it is not customary to speak a lot about the invisible elders on Mt. Athos. Copy of the Iveron Icon is brought to Australia from Mt. Athos

Copy of the Iveron Icon is brought to Australia from Mt. Athos
The gift of the Athonite Iveron Monastery was solemnly met by hundreds of believers arriving from various parts of Australia.
Comments

Ieremias3/20/2018 4:04 am
It is interesting that Archimandrite Gregory is taking this stance, since Dochiariou has also sent exact copies of the Gorgoepikoos icon to parishes around the world.