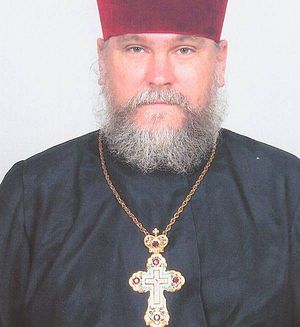 A story spread throughout Ukrainian and Western media in January when a man attacked Fr. Evgeny of the Zaporozhye Diocese of the Ukrainian Church who had declined to serve the funeral for his young son because the family members are parishioners of the schismatic “Kiev Patriarchate” (KP). As Archpriest Nikolai Danilevich, the Deputy Chairman of the Department for External Church Relations, explained, as the KP is schismatic and isolated from the Orthodox Church of Christ, the child was unbaptized in the eyes of the Orthodox Church, and thus, of course, the priest could not serve the child’s funeral.

According to prosecutors, the proceedings are based on the idea that “representatives of the Diocese of Zaporozhye of the Ukrainian Orthodox Church of the Moscow Patriarchate allow a selective approach to the implementation of religious rites, preferring those persons who underwent Baptism in the UOC-MP, thereby offending the religious sentiments of citizens in connection with their religious convictions.”

According to the Holy Synod, the criminal proceedings contain signs of persecution on religious grounds, stemming from a political point of view, and are nothing but an attempt to interfere in the internal life of the Ukrainian Orthodox Church. Nationalistic Ukrainians often persecute clergy and parishioners of the canonical Church because they remain faithful to the Orthodox Church within the jurisdiction of the Moscow Patriarchate.

As Fr. Nikolai Danilevich had explained, the Synod reiterated that Church Sacraments and rites can be celebrated exclusively for members of the Church, which requires a true, Orthodox Baptism. Faithful in Kolomiya, Ukraine pray outside church despite Uniate threats
Despite insults, threats, and even the use of physical force against them, the Orthodox faithful of the Holy Annunciation Church in Kolomiya, Ukraine, in the Transkarpatya region, are holding an ongoing prayer vigil outside the walls of their church. Schismatics storm UOC church, breaking Royal Doors
The schismatics broke into the altar through the sacristy, and, breaking the Royal Gates, entered the church and began to pray. Parish rector Fr. Vitaly Gurev tried to stop the seizure of the church, but the “Kiev Patriarchate” supporters pushed the priest from the church porch and threw him down the stairs. Ukrainian Orthodoxy: On The Path To Confessing The Faith
Andrei Rogozyansky
If anybody thinks that persecution is a thing of the past, and imagines it to be something only inside the torture chambers of the theomachist sadists of the Cheka or pagan Rome, then they are reassuring themselves in vain. For at the beginning of the twentieth-first century, in a country in central Europe, with mass media and offices of human rights defenders, huge shopping malls and gleaming limousines on the streets, the unimaginable is unfolding before us. Dozens of UOC priests are subjected to attacks - human rights advocate
The human rights advocate urged the OSCE Monitoring Mission to pay special attention to all these cases and recommended including new provisions regarding protections of rights of religious communities in the list of OSCE monitoring criteria of observing human rights in Ukraine.
Comments

Jane3/16/2018 11:38 am
If the parents had the boy baptised in the KP, why didn't they have his funeral with them? Could they also be feeling that the UOC is the only Church in Ukraine with valid sacraments? Or was it simply a provocation against the UOC?
×