They are offended that the Church sells icons of “Muscovite tsars.” 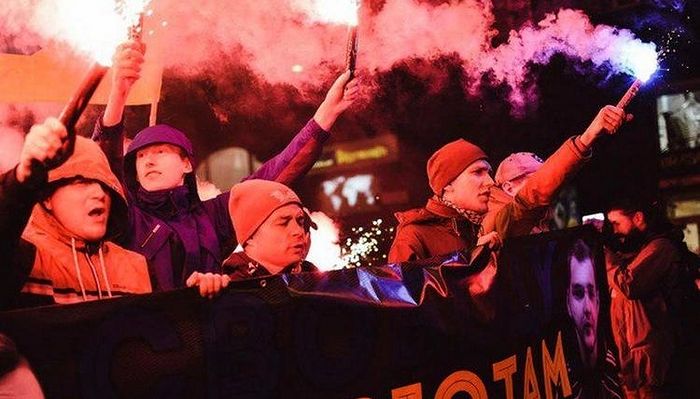 Radical right-wing and nationalistic Ukrainian organizations have spoken out against and threatened the authorities of the Chernigov Province for allowing the canonical Ukrainian Orthodox Church to participate in public events, reports The Union of Orthodox Journalists.

The radicals promised the authorities “appropriate consequences” if they continue to cooperate with the Church. This was declared in a joint statement from the radical organizations C-14, Freedom, Right Sector, National Corps, Free People, and Sokol.

According to the radicals, “The Moscow Patriarchate religious group is trying to legalize itself at various government events.” They referred to a Church presentation to students in Nezhin and the blessing of waters with the use of municipal plumbing on the feast of Theophany as “especially cynical.”

“The main message that we want to convey to the authorities is: If you cooperate with representatives of the aggressor country, it will be your responsibility and there will be appropriate consequences,” the nationalists underlined.

They believe the Ukrainian Church of the Moscow Patriarchate should be banned from public events due to supposed “systemic anti-Ukrainian activity.” They did not give specific examples of such activity, but limited their general allegations to the distribution of “literature of anti-Ukrainian content,” “icons with Muscovite tsars,” and “those who committed mass murder against Ukrainians.” The nationalists also reject claims that there is a “fratricidal, civil war” going on in Ukraine and that Russians are a “fraternal people.”

They also accuse the Church in Chernigov of forming pro-Russian corps under the cover of Orthodoxy, and the authorities of working “for the sake of the pro-Russian forces.” Therefore, they believe they are taking the functions of law enforcement officers upon themselves and also encourage Ukrainian citizens to “not be afraid to take responsibility.” Schismatic priests beat up canonical priest; Odessa churches desecrated
According to the assailant-priests, he didn’t “love Ukraine strongly enough.” Fr. Viktor, on the other hand, says the true cause was that he refused to surrender his parish to them and their schismatic jurisdiction, so they beat him up and broke a bottle over his head, as vikka.ua reports.
Comments
×