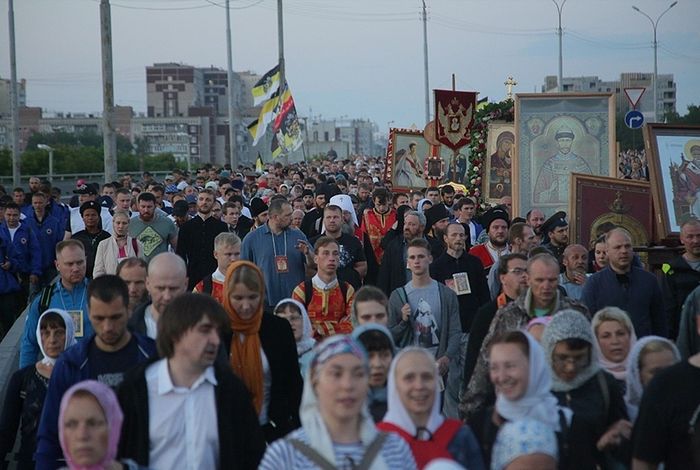 A cross procession in memory of the murder of the Royal Martyrs Tsar Nicholas II and his family began in the northwestern Russian city of Pskov today. The procession will wind its way through various Russian cities and holy sites, arriving in Ekaterinburg to celebrate the centenary of the family’s martyrdom, which took place on July 4/17, 1918, reports the official site of the city of Pskov.

The procession began in the Church of St. Alexander Nevsky and will pass through St. Petersburg, Vologda, Tikhvin, Vyatka, Kungur, and the cities and villages of the Kostroma, Yaroslavl, and Kirov Provinces, and of Perm Krai, and will arrive in Ekaterinburg on July 14, having covered a span of about 1,800 miles over the course of four months.

The event will end on July 17 with a nighttime Liturgy in the Church on the Blood, which was built on the site of the former Ipatiev House, where the Royal Martyrs were slain.

The procession began in Pskov because it was there, on March 2, 1917, that Royal Martyr Tsar Nicholas signed a manifesto of abdication for himself, and then on behalf of his son Royal Martyr Tsarevich Alexei in favor of the tsar’s younger brother Grand Duke Mikhail Alexandrovich.

Tsar Nicholas and family canonized because they put moral ideals above the crown—Pat. Kirill
In addition to their holy deaths, the Russian Orthodox Church canonized Tsar Nicholas II and his family as saints because they placed moral ideals above the royal crown, His Holiness Pat. Kirill stated at the opening of the 26th annual Nativity Readings yesterday.

When we learn to love and thank the Royal Family, the questions concerning their remains will be settled by themselves”
A conversation with Metropolitan Vikenty of Tashkent and Uzbekistan
Anatoly Stepanov, Metropolitan Vikenty (Morar)
—It has always seemed to me that no one has really treated these remains seriously. Just as people were negligent toward the Tsar during his lifetime, so also now there is a rather haphazard way of dealing with his supposed remains. As a result, mistrust has arisen in peoples’ awareness as to what has actually been preserved.
Comments