On the Shattering of Human Hopes

Sermon on the Third Sunday of Pascha, the Myrrh-bearing Women 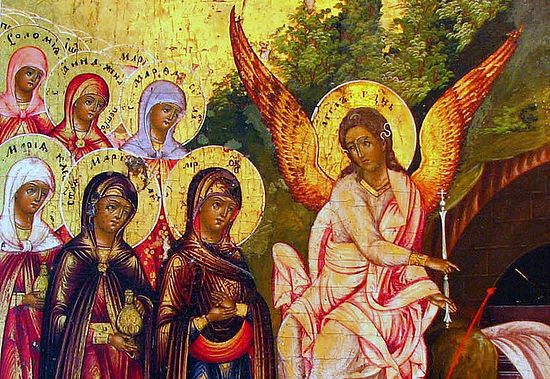 Myrrh-bearing Women at the tomb of the Lord

The worst thing that can happen in our lives is the loss of Christian hope. Not only hope, but specifically Christian hope. What can be worse than this? Hope… It was the expectation, the pledge of meaning, and the yearning for a happy future. Hope gave one the strength to live. It bore the foretaste of joy. And then—it all fell apart. Just a moment goes by and you understand that all has been irreparably lost. There can be no greater catastrophe in a person’s life.

Today, as we remember that deep dawn, when several women timidly, secretively neared the grave of their Teacher, we involuntarily feel their joyless, sorrowful state—the state of people whose hope has been shattered.

They came while it was still dark to the grave in order to anoint the buried body of their Teacher with aromatic oils according to the ancient tradition of their forefathers. They wanted to pay Him their last respects. Yes, for them the Lord Jesus Christ was just a Teacher. Beloved, incomparable to any mortals, but just the same a Teacher, Who to their great sorrow had not been able to bring His beautiful promises to pass.

The woe and hidden thoughts, the bitter disappointment of all the disciples was with pain of heart expressed by the apostles Luke and Cleopas on that same day, in the evening on the road to Emmaus, when having met the risen Savior, they did not recognize Him. They spoke sadly of Christ: “They killed Him, and before that they tortured Him terribly and mocked Him! But we had hoped that it was Him, Who would restore the kingdom of Israel!” (cf. Lk. 24:13–21).

Just like Luke and Cleopas, like all the disciples, the Myrrh-bearers hoped in Jesus’s promise to them of a Kingdom of happiness and well-being, love and justice. And where is it? Their Teacher was horribly mocked and killed. All around the orphaned disciples, the darkness only thickened. Evil ever more brazenly triumphed on earth.

An earthly kingdom of goodness and justice is an eternal illusion that always takes people in. Until the end of time, daydreams about it will intoxicate us. But the fruits of these alluring and charming daydreams are truly horrible. When the Son of God came to earth to bring His creation into the true Kingdom of Heaven, mankind responded to Him with Golgotha. He brought mankind tidings that a Kingdom not of this world has come to the world. People took this to be no more than an earthly form of existence that their minds could apprehend.

Both the disciples and the Myrrh-bearers, as a part of humanity, bore within themselves the general fatal illness of alienation from God. But if in the leaders of the Old Testament people alienation evolved into diabolical hatred and deicide, in the disciples of Christ this illness manifested itself in their hereditary human spiritual blindness and helpless insensitivity, which they strove with all their hearts to overcome. But this took time—and more importantly, the work of God’s grace.

Only mankind transfigured by Christ—and in Christ—is capable of entering into the Kingdom of Heaven, ineffable and unfathomable to this world. What do we, also spiritually blind, suffering from illusions about ourselves, from pride and vanity, need in order to come closer to this Kingdom?

We are taught what to do by today’s instructors—the Myrrh-bearers who came to the little cave, the final refuge of our Lord Jesus Christ. With horror the women were preparing themselves to see the desecrated body of their Teacher. But they found something totally unexpected.

The mind of man does not know, Eye hath not seen, nor ear heard, neither have entered into the heart of man, says the apostle Paul, the things which God hath prepared for them that love him (1 Cor. 2:9)! Instead of the tormented corruptible remains of their Teacher in a stone cave they found tidings of the resurrected Jesus Christ, the Son of God. Before them stood an inhabitant of a divine world that had remained faithful to the Lord—an angel—and pronounced these simple and great words: “You seek the crucified Nazarene. He is not here. He is risen! (cf. Lk. 24:6).

The angel announced the same thing that the Lord Jesus Christ had said many times to His disciples. You would think they would rejoice! But what was their human reaction? They ran away in horror and fear, not understanding and perplexed! They trembled and were amazed: neither said they any thing to any man; for they were afraid (Mk. 16:8).

We look at the Myrrh-bearers and recognize ourselves.

Human thoughts are as far from divine thoughts as the heavens are from the earth, says the prophet Isaiah (cf. Is. 55:8–9). Our boldest hopes and dreams about human happiness, about our own selves, about our close ones, and about the future are all at best naiveté in comparison with what the Lord has prepared for us. We can compare this with a small child to whom his father is preparing something wonderful, a great life’s arena. But not able to appreciate or even understand any part of his father’s plan, the little child is immersed only in his cherished, beloved dreams: “My father will do everything for me! I’ll have a lot of toys, and sweets, and candy!” What the father is preparing for his children is unfathomable to the weak and fragile mind of a child.

What brought the Myrrh-bearer to their Teacher’s tomb? To the final earthly resting place of the One Who did not justify their hopes? To the Teacher Who promised them so much, but could not fulfill these promises? Love for the Savior brought them there. It is this love, the only thing that is greater than our yearning, that is, our hope, greater than all our reasoning, which binds us with God.

This very love for Christ does not put the hearts of the faithful to shame! It is no accident that the Myrrh-bearing Women were the first out of all mankind to hear the tidings of the Resurrection.

What haven’t people tried to convince us about God, Christ, and the Church over all that time since Christ’s Resurrection and to the present day! One hundred years ago they started destroying our Orthodox country, and they nearly destroyed it completely. There remained only a handful of “ignorant” believers and “pitiful” priests, who did not even dare raise their heads. But within these “ignorant and pitiful” people—from the point of view of this world—burned love and adoration for their Great Teacher. They loved Him as did the Myrrh-bearers and apostles, who lost their faith and hope but then found them again.

And we, brothers and sisters, shall remember the Myrrh-bearing Women not only today, but also during the most complicated times in our lives, when hopes are shattered, when it seems that no one will help us, when the worst possible thing happens, which, in the words of St. Job the Much Suffering, makes our souls tremble. Then we shall remember these remarkable women. Retaining love in their hearts for God, they received infinitely more than what they hoped for, both for themselves and for all their loved ones both living and dead.

Such is our Lord. He leads fallen human existence; He leads each one of us through trials that make us steadfast in faith, truth, and spiritual freedom. But He does not allow anything to happen beyond our strength. He knows, like a loving father, when the time has come to put our sinful human hopes and weak, fragile dreams to shame. And He knows when we have become ready for the revelation of true, divine love, so that we might see the infinite abundance of what God has prepared for all those who love Him.

The Bravery and Courage of the Myrrhbearing Women
Archimandrite Cleopa (Ilie)
Their great zeal, sacred reverence, and courage of soul passed over all the Jews’ obstacles, and all the guards at the Tomb did not shake their resolve. But one thought, but one desire led their minds and hearts— to serve the funeral of their dear Savior with fullness of faith and with reverence. Pure Love and Devotion for Christ
Sermon for the Sunday of the Myrrh-Bearing Women 2016
Let us throw off forever this shameful fear and apathy and truly follow Christ in the example of the Myrrh-bearing Women. Let us leave from the fearful shadows and locked rooms and come out to meet Christ. If we do, we will find, like the Myrrh-bearing Women did, all of our fears banished, the stone rolled away and we will behold the bright and wondrous sepulcher of Christ.
Comments

Thank you for this great sermon!
×