The Orthodox Church commemorates the wonderworking Supraśl Icon of the Mother of God annually on August 10. The day is a great feast for the faithful of the Polish Orthodox Church, who gather in the thousands at Supraśl Monastery in northeastern Poland. The celebration coincides, not accidentally, with that of the Smolensk Hodigitria Icon of the Mother of God, revealing the ancient connections between the Podlasie and Smolensk peoples. Pilgrims began arriving at the monastery on the eve of the feast: on foot from Wasilków, Krynki, and Białystok, by canoe from Gródek, and by bus from Warsaw (organized by the Orthodox Ordynariat of the Polish Army). The pilgrims were not discouraged by the hardships of the hot weather and road work on the way to the feast, the monastery’s site joyfully reports. The All-Night Vigil was celebrated by His Beatitude Metropolitan Sawa of Warsaw and All Poland and eight other hierarchs of the Polish Church. An akathist to the Mother of God and a panihikda for Archbishop Miron, the monastery’s former abbot, were celebrated following the Vigil. The services went all through the night, with several Liturgies being served in the monastery’s various churches. The Liturgy in the main church was again presided over by Met. Sawa, assisted by numerous hierarchs and clergy. The homily was delivered by Archbishop Gregory of Belsk, vicar of The Warsaw Diocese, who spoke of the grace that many find at the holy monastery: “Brothers and sisters, here, in this revived holy monastery, there is a daily transformation of human nature. A lot of people come here to pour out their pain before the image of the Mother of God.” The celebrations were crowned with a procession around the church. The video below offers a closer look at the feast and the monastery:

The miraculous Suprasl Icon was commissioned in 1503 by the monastery’s founder, Metropolitan Jozef Soltan, as a copy of the eleventh century Smolesnk Icon in the Hodigitria style. The icon became one of the most venerated throughout the region with many miracles attributed to it. When the monks fled to Russia in 1915 they took with them the miraculous icon which was lost and later found destroyed. The monastery’s current icon is a copy painted one hundred years ago for the 400th anniversary of the monastery and enjoys wide veneration by the faithful of Poland and beyond. Triple feast at Poland’s Supraśl Monastery
There were sevearl causes for celebration at the Annunciation Monastery in Supra&#347;l in northeastern Poland on Sunday. First, as in all churches celebrating on the Old Calendar, the Three Holy Hierarchs—Sts. Basil the Great, Gregory the Theologian, and John Chrysostom, three of the Church’s greatest saints and theologians—were celebrated, along with the consecration of the renovated Church of St. John the Theologian, and the name’s day of the monastery’s hierarch Bishop Gregory of Supra&#347;l. 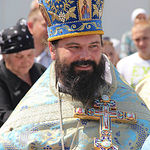