We offer our readers an extract from the book, St. Tikhon of Moscow, published by Moscow Sretensky Monastery’s Publishing House. 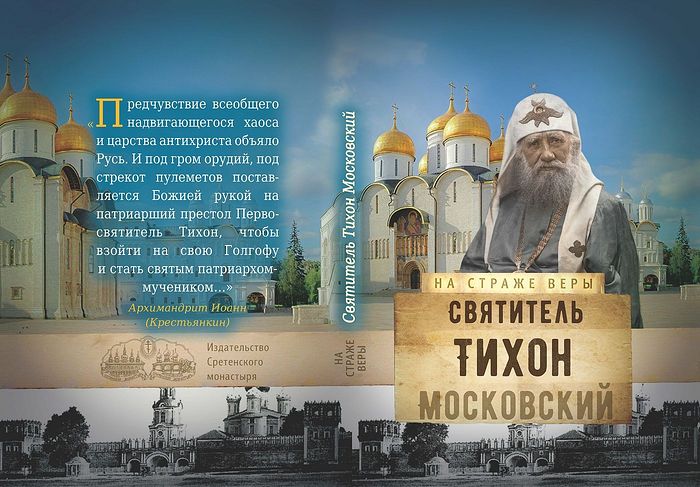 As a priest’s son Vasily Belavin trod in his father’s footsteps and entered the theological school in the town of Toropets [now in the Tver region, but at that time in the Pskov province.—Trans.] and after graduating from it in 1878 he left his parents’ home and enrolled in Pskov Theological Seminary. His fellow students jokingly called Vasily “the bishop”. The young man graduated from the seminary with honors degree and decided to continue his studies at the academy.

This is what his contemporaries said of Patriarch Tikhon in their reminiscences: “From his childhood Tikhon was good-natured, meek, and God-fearing without any slyness or sanctimoniousness.” At St. Petersburg Theological Academy, where St. Tikhon studied after the seminary, he was nicknamed “the patriarch”. At that time it didn’t occur to anybody that this sobriquet would turn out to be prophetic as the patriarchate in Russia was not reinstituted until 1917.

“Did you notice what his eyes are like?” Tsarevsky’s mother asked her daughter after the teacher had left. “They are pure and clear like the eyes of a dove.”

“He radiates warmth and kindness, and he is so intelligent,” her daughter replied.

The father who was finishing up a cup of tea warned his spouse and daughter in a businesslike manner that he (Vasily) could hardly be considered as the daughter’s prospective husband:

“Ignore the fact that he is very talkative and cheerful. As a student Vasily Ivanovich was nicknamed ‘the patriarch’, and his only path is monastic life.” 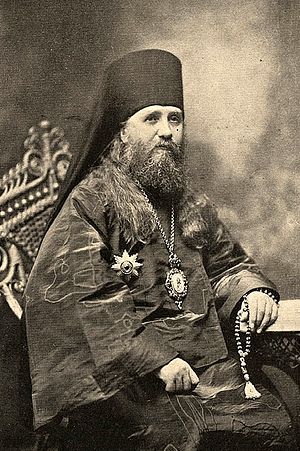 “Archimandrite Tikhon enjoyed wide popularity at the seminary and among the common folk as well. Local priests would invite him to their patronal feasts. Nice and charming, he was a welcome guest everywhere, gained everybody’s favor, enlivened any gathering, and everyone felt fine and at ease in his company. As the rector [of Kholm Seminary.—Trans.] he succeeded in building natural, stable relations with ordinary people—and it was he who set me on this path, too. As a bishop he continued to deepen and develop his bond with people and truly became Kholmshchina’s1 beloved archpastor. During my journeys across my diocese [Evlogy was bishop of Kholm between 1905 and 1914.—Trans.] clergy and laity praised him highly.”

“Your tireless archpastoral care for the good of your flock <…> has won my monarchical favor, as the expression of which I most graciously present you with a diamond cross to be worn on your klobuk.”

Fr. Tikhon Pelikh, a wonderful elder and rector of St. Elias Church behind the Holy Trinity—St. Sergius Lavra, recalled that all who came in contact with Patriarch Tikhon were blessed with grace and love. One day Fr. Tikhon Pelikh, a very young soldier who as a peasant had been drafted into the army, hungry and ragged, reached Moscow and came to the church where Patriarch Tikhon was serving. This is how he recounted this meeting: “I have no idea how I found myself in the altar. It seemed as if some force brought me up to Patriarch Tikhon. I didn’t know what to say. I came up to him to receive his blessing. The Patriarch asked me tenderly: ‘What is your name?’ I answered: ‘Tikhon.’ ‘I am Tikhon, too,’ he replied. I don’t remember what happened next except that the subdeacons pulled me out of the altar by the edges of my overcoat.”

In January 1918, the journalist Korovin wrote in the Russian newspaper Fonar (“Lantern”) how he had conducted an interview with Patriarch Tikhon. The Patriarch had been enthroned shortly before then, namely in December 1917, on the feast of the Entry of the Theotokos into the Temple at the Moscow Kremlin’s Dormition Cathedral. It was the very beginning of the way of the cross and Golgotha for His Holiness, who became a confessor of the faith of Christ and intercessor for the whole of Russia.

Korovin wrote about the Patriarch:

“The Patriarch fascinates one by his ease of communication, approachability and the sincere gentleness of his tone. He is still fit and vigorous in his movements despite his advanced age. His shrewd, deep eyes often kindle with the fire of zeal, which is automatically conveyed to those who speak with him.”

Prof. Vasily Vinogradov, then Chairman of the Moscow Diocesan Council who was to become an archpriest in the ROCOR, wrote about Patriarch Tikhon in his book from emigration:

“The ‘repentance letter’ which Patriarch Tikhon was forced to sign and which was published by Soviet newspapers didn’t impress the faithful at all. Without any propaganda, by miracle of God all the faithful expressed their attitude towards the ‘repentance letter’ unanimously in the following way: ‘The Patriarch has written this for the Bolsheviks and not for us.’ The pseudo-council of 1923 had absolutely no authority with the faithful people. Everybody clearly understood that the meeting of that pseudo-council was a mere trick of the Soviet Government and of no account for the Church. As a result of its error the Soviet Government were faced with an unexpected fact: The overwhelming majority of the faithful openly recognized the released primate as their only legitimate head and leader, and the Patriarch emerged in the eyes of the authorities not as the leader of an insignificant group of believers but in his full glory as the real spiritual leader of the faithful masses.” 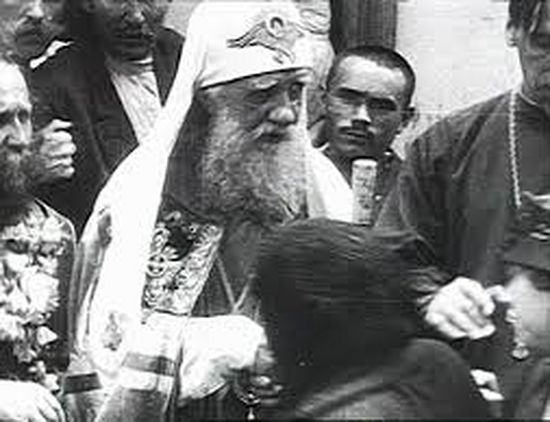 “The door opened and I entered the reception room. What I saw there inspired awe in me. I saw an icon in front of me—a living saint of God who was like any saints depicted by the Church on icons. It was an image of word, life, love, spirit, faith, and purity. No libel, no lie, no spite could ever deprive the faithful of this conviction of the spiritual glory of the Patriarch.”

This is what Archpriest Sergei Bulgakov said about Patriarch Tikhon:

“The captive Patriarch of All Russia became as a captive the light of the world. Since the beginning of its history the Russian Church had never risen so high through its head than it did in those days of great sorrow and tribulation; and there is no other name in Christendom that is repeated with such great respect as the name of the primate of the Russian Church.”

“He, Patriarch Tikhon, exhausted every possible method of reconciliation with the government, everything possible for the Church and for a churchman, and became a victim in the innermost, broadest and deepest sense of this word. Sacrificing himself, his own name, his glory as the confessor and denouncer of falsehood, he humbled himself when he changed his tone with the government, but never fell. He humiliated himself, but never anybody else, and didn’t exalt himself by humiliating others. He didn’t spare himself in order to beg for mercy for his pastors, his people, and the Church heritage… And the people understood this and felt deep pity for him wholeheartedly, having been fully convinced of his sainthood. He was a courageous and very meek creature, an exclusively flawless, holy personality.”

A Russian correspondent of the Paris-based Informations newspaper informed his readers:

“Calm, intelligent, affectionate, very compassionate, and dressed so simply with no hint of luxury, receiving all visitors without distinction, Patriarch Tikhon may be devoid of all pomposity, but is indeed very dear to thousands of the little people, workers and peasants, who come to see him. Although seemingly weak, a strong will, the energy to endure all trials, and steadfast faith are discernible in him… The constant expressions of sympathy and loyalty that he receives from every corner of Russia make him strong and patient…

“A dense, silent crowd waited for the reception hours. Pilgrims who could be made out by their suntanned faces, large shoes and pious look, waited and sat in the shade of the tower battlements. They had covered several versts2 on foot to receive the Patriarch’s blessing. A rural priest, nervous and timid, walked up and down… A woman pressed herself to a bench and covered her face with her hands. Her intense sobbing made her shoulders jerk up convulsively. There is no doubt she had come here to seek relief from some great misery, and I couldn’t help but remember the thousands and thousands of those who had been executed by firing squad… Townspeople and peasants, mostly those of common origin, had waited for long hours or even days for the little door to open and a choirboy to lead them into Patriarch Tikhon’s reception-room.” Patriarchs in Times of Trouble
Metropolitan Tikhon (Shevkunov) of Pskov and Porkhov
No matter what historic period the glorification takes place in, it always happens at a time when that spiritual paragon of life in Christ can give assistance from the triumphant Church of Heaven to our earthly, militant Church. A 1923 Interview with Patriarch Tikhon by an American
From "The Light of Russia" by Donald A. Lowrie

A 1923 Interview with Patriarch Tikhon by an American
From "The Light of Russia" by Donald A. Lowrie
Patriarch Tikhon's nine years in America were important ones in the affairs of the Orthodox Church there. During this period the episcopal seat was removed from San Francisco to New York. During this period Bishop Tikhon became Archbishiop Tikhon, the first American Orthodox hierarch to bear that title. These years made a deep impression upon the future Patriarch himself, and as will later be pointed out, the knowledge of the life and religious ideals of American people he acquired there have been very influential in later events in Russia. America has no better friend in Russia than Patriarch Tikhon and he seems especially pleased to maintain his connection with Americans and things American.
Comments
×