Homily on the Fourth Sunday of Pascha, the Healing of the Paralytic 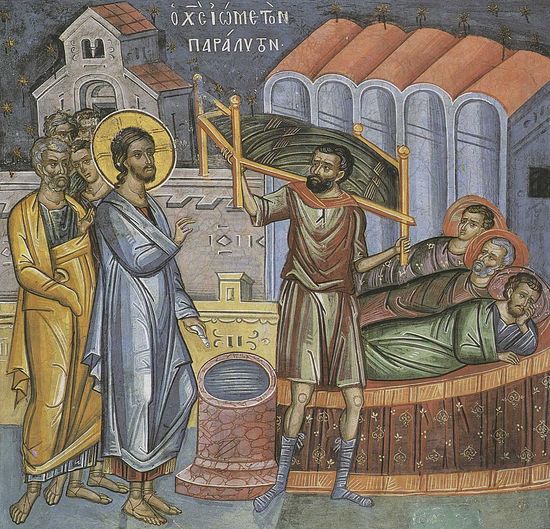 Today’s Gospel tells us how the Lord healed a poor infirm man, while He was at a feast in Jerusalem (cf. Jn. 5:1-14).

There was a pool in Jerusalem (we can still see what has remained of the original pool), that was something similar to a swimming pool, where a lot of miserable, feeble people lay. They all lay waiting. An angel came occasionally to trouble the water, and the first, who managed to step down into the water after this moving, was cured. When the Lord came, He saw a man, who had been paralyzed, who had suffered from a dreadful, severe infirmity for thirty-eight years, and asked whether he wanted to be made whole. “Of course I do, but there is no one, who would put me into this healing water at the right time. When I have the strength to come, someone else steps down ahead of me and is cured. I do not have anyone to help me,” the man said. The Lord healed this man with His single word—he took up his bed and walked being whole. And then he witnessed, “That Man (Christ), who made me whole, said to me: Take up your bed and walk.” Another important thing happened afterwards. Some time later Christ found the man in the temple, where he had admittedly come to thank God for his healing, and said these words, which are very significant for everyone: “Sin no more, lest a worse thing come unto thee.”

Death, infirmity, temporality and susceptibility to passions entered this world with the sin; they are interwoven. Adam sinned, and death, suffering and destruction came into the world. Sin destroys everything in a man, both his body and his soul. Any doctor is perfectly aware of it. Indeed, if we look closer, we will come to understand that the ailments people suffer from are inseparable from their sins. How many diseases are caused by gluttony, drinking, or fornication! A multitude of horrible, severe diseases ensue. Obviously this does not give us any reason to humiliate and insult our neighbors, pointing an accusing finger at them saying: You are ill because you are such a sinner! We all are sinners, we all are paralyzed.

The paralytic is an image of all humankind, even of those who are strong, beautiful and successful, as we like to say nowadays. Their souls often happen to be lying and agonizing, and there is no one, who would help them, who would bring them to the life-giving water of the Gospel. Sometimes people spend their whole life suffering from this spiritual paralysis, entire nations endure paralysis—an awful, sinful condition.

Only the Lord, the Son of God, has the power to heal this terrible disease. How many people did Christ heal during His earthly life—people suffering from hemorrhages, with withered hands, the demonically possessed, the blind. By healing them, He showed that His Law and His Power are beyond the laws of this world.

The Gospel message and divine grace go beyond any sin. God’s grace is the only thing that can raise us from the bed of our souls’ paralysis.

Nothing in this world can ever stop divine grace in its all-defeating power. It is only sin and our proneness to sin that distract us from it. May this never happen to us, may we never yield to terrible, destructive paralysis! May the Lord, Who rose from the dead, be always with us! How Long Have We Been Ill?
Fr. James Guirguis

How Long Have We Been Ill?
Fr. James Guirguis
I suspect that if I ask you if you want to be cured of your anger, you will reply “Yes, I want to be cured.” But in the depths of your heart is that true?

“I have no man.” Homily on the Sunday of the Paralytic
John 5:1-15
Archpriest Alexander Shargunov
Perhaps it is because the Second Coming of Christ is near that the Lord today is sweeping aside with such clarity and distinctness all appearance of Christianity, and wants each of us to be placed before a terrible choice: to be without Christ to the end, or to be to the end with Christ.
Comments

Anthony5/19/2019 12:01 pm
Hello! I trust this day finds you really well? I have a question, I hope you may be able to answer for me. We see that only the first ill person who entered the troubled waters was healed. Do we have an interpretation as to why this was??? Why only the first??? Why wasn't this grace extended to all those who were in need at the time??? Why did only one privileged ill person have the good pleasure of being healed??? Please may I have an answer to what us mere mortals consider to be a very perplexing question??? With thanks in advance.
×