How St. Nicholas Came Down to the Soldiers in the Trenches. A True Story from 1944 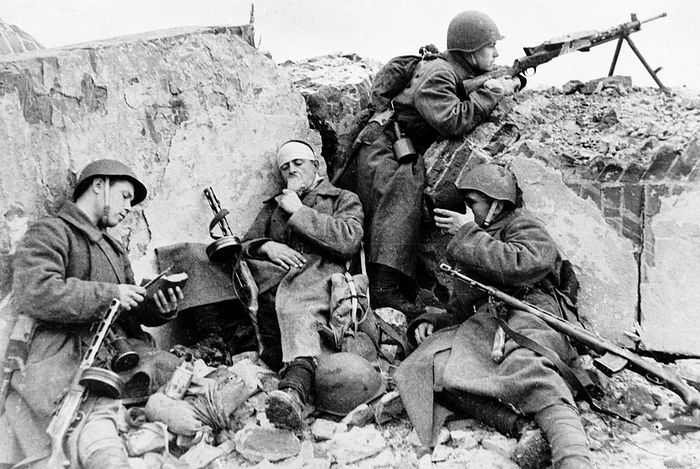 This story was recounted by my grandfather who was a participant in the events described below.

My grandfather Fyodor Sidorovich went to the front in 1941. He was assigned to the 282th infantry regiment of the 19th infantry division. In the first months of the war there was very fierce and violent fighting on the Western Front, and as early as August 1941 he was badly wounded in the head, both legs, and the right arm. After he had recovered he was sent to the Baltic Front. My grandfather received the joyful news of victory while in a hospital because shortly before, in February 1945, he had again been seriously wounded by a mortar shell splinter during contact reconnaissance near Libava [the modern name: Liepāja—a port in western Latvia on the Baltic Sea.—Trans.]. For merit in battle my grandfather Fyodor Sidorovich was awarded the Order of the Red Star and other orders and medals. He was not particularly enthusiastic about recalling the war years and preferred not to answer his relatives’ questions on this subject. However, grandfather would readily share one episode from his military past, which was so dear to his heart. He considered himself to be a religious man, though he never paraded his religious feelings for people to see. The flame of faith that he carried through the crucible of the Great Patriotic War [World War II] had been kindled in him by his parents. And when my grandfather would remember his mother, he would relate this miraculous story with tears in his eyes.

It was in 1944. There was an air of impending victory everywhere, but nevertheless death had not lost its sway. A blanket of haze covered the battlefield, which was dotted with unexploded shells, and there was the smell of burning. There was silence, interrupted by occasional bursts of submachine-gun fire. Three Soviet soldiers—Sidor, Vasily and Fyodor—were sitting in a trench. They were smoking silently and thinking their own thoughts.

Sidor was from a peasant family. Orphaned in his early childhood, he had gotten used to honorably enduring the hardships of life. Having learned to operate a combine, he had become one of the best hard workers on the collective farm of his native village.

War entered Vasily’s harmonious and happy life by storm, like a rock thrown through a window. His loving wife and six children were left at home.

Fyodor, my grandfather, was thinking about his mother at that moment. The war found her seriously ill, while Fyodor was taking care of her. So his sick mother needed tending. There were no other relatives left, but his beloved motherland needed even greater filial care. Fyodor would often recall the moment of their parting, when his mother kissed him on his forehead, blessed him with a cross in a sweeping manner and said at parting: “May God keep you, my dear son!”

At the moment when the three soldiers were immersed deep in their thoughts, an old man came down into their trench. He had kind eyes, a high forehead, and wore a linen shirt… It seemed as if they had already seen him somewhere but couldn’t make out where exactly—so many paths had been trodden and so many boots worn out… At that moment nobody asked the old man where he had appeared from, though it was absolutely impossible to understand how this man had managed to walk through the mine field through the whistle of stray bullets.

No one is surprised by miracles at war. The very fact that you are alive alone is considered a miracle.

And suddenly Sidor recollected that he had seen this little old man at home! There, in the icon corner of his hut, there stood a full-height icon of St. Nicholas, and his late mother would often offer up her prayers in front of it.

“Grandpa, when will this accursed war end?” Fyodor asked timidly.

“Soon, soon, my sons!” the good-natured old man replied and went out mysteriously: “But this war is not the last one. Four horses will fight as well, and the red horse will win!”

Their conversation was interrupted by the drone of an enemy plane. The commander’s order was heard: “To arms!” The little old man walked up quietly and left.

Fyodor wanted to shout to the stranger to wait till the enemy attack was over, but nobody could be seen around them. And then he figured out that St. Nicholas himself had visited them. It was a pity that their meeting had been so brief because Fyodor wanted to ask him how his mother was feeling. And at the same instance it dawned on him that St. Nicholas had come to them not without a reason—it meant that somebody had been tearfully praying in front of an icon of the holy hierarch, and not only for her own son but also for every single Russian soldier—whether he was living or dead—who laid down their lives for their friends on the battlefield. St. Nicholas and the Miraculous Cost Estimate
Archpriest Oleg Vrona
Thanks to the intercessions of St. Nicholas, the church on Vene street in Tallin continues not only to adorn the city, but also continues to warm its people’s souls, ever in need of such warmth in our difficult day and age.