He Gives Us New Life 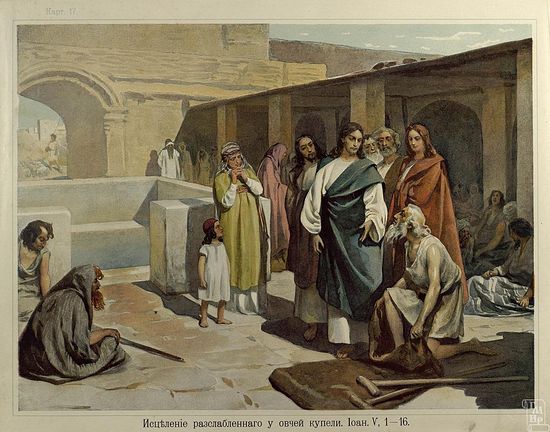 Today we hear the familiar story of the paralytic who had been ill for 38 years. We are not told how long he had been laying beside the miraculous pool, but we are told that Our Lord Jesus Christ knew that he had been there for a long time. The Lord likewise knows each of our situations, our trials, our difficulties, very intimately. He knows them better than we know them!

Our Lord comes up to this paralyzed man directly. This in and of itself should cause our hearts great joy. The king of heaven and earth, the maker of all things, descended to our level and then He goes directly to the man who is poor, sick and in great need, and He does something that most kings and leaders never do. He speaks with a man who is in great need. Who is this man, that the Lord of glory should come to him? Who are we that the Lord should come to us? But such is the grace of God and His mercy towards mankind.

What does Our Lord say to the man? Only a simply question: “Do you want to be healed?” There is a way in which what the Lord Jesus says to this man, is the same thing that the Lord speaks quietly into our hearts. He whispers to each of us gently “Do you want to be healed?” But it is not always easy for us to respond properly to this question. Take the paralytic for example. How did he answer the Lord? He said “Sir, I have no man to put me into the pool when the water is troubled, and while I am going another steps down before me.” So the man wanted healing but he understood that the problem was that he couldn’t get into the pool fast enough. In his mind, he thought to himself, “If only I had someone to help me get into the water quickly, I would be healed.” He lacks understanding. He doesn’t understand his powerlessness, and he doesn’t know the true source of this healing. He has been putting his trust in men, and as is usually the case, men have let this man down for a very long time. But the Scriptures tell us it is better to put trust in the Lord than to put confidence in men.

We,like the paralytic,are often quite similar in our day to day lack of understanding. Some think to themselves, if only I had more money, everything in my lifewould be better. If only we had a different president, everything would be better. When a woman comes to complain about her husband, she says “if only he would change, everything would be better.” The men often say the exact same thing “if only she would change, everything would be better.” We sometimes say to ourselves “I would be a better person if I didn’t have to deal with so much stress at work or at home.” We say “if only I could lose those extra pounds, I would feel much better about life.” If only I had a different job, I would be a better person. If only I was more strict, if only I fasted more, if only I worked harder, I would be a better Christian. In all of these things we can be easily distracted from the source of our healing. All of these things might be good for us, but they are tools. The simple fact remains, according to the words of the Lord “Without Me you can do nothing.” Christ asks each of us if we want to be healed, let’s not fall into the trap of looking for healing in all the wrong places.

We sometimes believe that our life will be better if external circumstances change. The Lord Jesus Christ proved to the paralytic that it was not the outside situation that had to change but a change from within, through the work of the physician of oursouls and the lover of mankind. What I am trying to say to you is this: Don’t lose your focus or look to false saviors. It is the Lord Jesus Christ alonewho can restore and heal you. We have an advantage that the paralytic did not have, we know the identity of Jesus Christ. We know Him by name, but have we given Him the time to know our hearts? Have we opened our hearts to Him and given Him a place to dwell? Do we really trust our lives and our situations and our difficulties to Him? Do we really spend time standing or kneeling and speaking with Him, asking Him to put His hand on our lives and heal us? Do we ask Him to bless our family members, friends and co-workers? Do we ask Him to bless our classmates, both the nice and the not-so-nice?

I don’t want us to be confused or distracted from reality. Jesus Christ is our reality. He is our salvation. He is our hope. He is our joy. He is our healing. He is our peace. He took a man who was basically dead, and gave him a resurrection, a new life. He has the power to give us new life as well.

The paralytic was confused regarding the source of healing. But after his healing, we see that it was the Jews who were confused. What was it that confused them? They saw the man who had been paralyzed, carrying his pallet and walking. It scandalized them. Why was this the case? Because they perceived that the law of God was being broken, the man was working, by carrying his bed on the Sabbath day of rest. Little did they know that the One who had commanded the man to rise, take up his pallet and walk, was the same One who made the Sun itself to rise and fall, the same One who caused the tides to come in and to go out. The One who in fact had made the law of the Sabbath out of love for His people. Yet the Jews did not understand but turned the letter of the lawinto a weapon.

They ignored the fact that the man was healed and restored after being ill for 38 years, andinstead they focused on what they saw as his shortcoming and sin. I hopethat we have changed for the better but in some places these judgmental and legalistic attitudes still exist. Their are placeswhere people focus on all of the externalities and appearances, but I thank God that He has protected your hearts from this. I pray that we never be like these judgmental ones but rather let us be like the Lord who provides healing and mercy wherever He goes. God doesn’t need us to judge others, He needs us to love them.

In both situations, that of the paralytic and that of the Jews, we see that both parties put their trust in the wrong things. One in the men who might help him and in the miraculous pool. The others put their trust in the letter of the law. Yet God had something better planned, because His thoughts are not our thoughts and His ways are not our ways. The prophet Jeremiah speaking the word of God once said of His people“I will heal them and reveal to them the abundance of peace and truth.”(Jer 33:6) May we not forget the source of that healing, may we cling to Him and may He shower us with abundant peace and truth in the light of His resurrection. Christ is risen! Sin is Destructive
Homily on the Fourth Sunday of Pascha, the Healing of the Paralytic
Hieromonk Ignaty (Shestakov)
Death, infirmity, temporality and susceptibility to passions entered this world with the sin; they are interwoven. Sin destroys everything in a man, both his body and his soul. Any doctor is perfectly aware of it. “I have no man.” Homily on the Sunday of the Paralytic
John 5:1-15
Archpriest Alexander Shargunov
Perhaps it is because the Second Coming of Christ is near that the Lord today is sweeping aside with such clarity and distinctness all appearance of Christianity, and wants each of us to be placed before a terrible choice: to be without Christ to the end, or to be to the end with Christ.
Comments

Anthony5/25/2019 12:23 pm
Beloved Mr Bell! I greet you Sir! Sir! You categorically stated the following: ''He may turn His back on me, but not I on Him'' Do you therefore imply, Sir that you are above God? That God is passionate and as such begrudges humans but that you (being a westerner and thus having reached the nirvana of the ultimate being), are above God, taking the moral high ground and as it were turn the other cheek - being hard done and rejected by God!!! Dearly beloved Sir! Your kompass is surely pointing in the wrong direction if these are your beliefs! Sir!

Rdr Andreas Moran5/24/2019 8:13 pm
I'm not sure it is right to say that Christ may turn His back on anyone. God may, as it is said, withdraw, but His countenance, I would say, is always towards us, awaiting our repentant arising up and return to Him after every fall. May Christ, Who is Risen from the Dead, raise me from the death of sin!

Joseph Bell5/24/2019 6:29 pm
Many people appear to be angry with God, or reject Him as nonsensical. The latter reaction is only play acting. I think that underneath that they are ashamed. They think that their behavior is unforgivable. They are afraid of God. Let us recount that our Lord did not reject one person while on Earth. I myself am the worst of sinners but I do not betray our Lord. He may turn His back on me, but not I on Him. I accept the consequences. Hold the course to the source of all goodness, stay steadfast no matter outward appearances. This is The Way.
×