A Miracle of Courage Shown by the Faithful Today we commemorate the Vladimir icon of the Theotokos. The present feast, dedicated to this miraculous icon, was established in commemoration of the deliverance of Moscow from the invasion of Akhmed Khan.

In 1480, Akhmed Khan decided to punish Moscow, which had refused to pay tribute to the Great Horde. He colluded with Casimir IV of Poland in arranging a joint attack against Russia, and even came to the mouth of the Ugra River, the left tributary of the Oka river, when the Russian troops halted him. Had they crossed the river, Akhmed’s horsemen could have reached Moscow after three to four such crossings. The Russian warriors, however, had bridged all fords and roads, and after three days of crossfire, the so-called Great Stand on the Ugra River began. While both sides were tensely preparing for the crucial battle, the Russian people, standing before the Vladimir icon, were offering their prayers to the Lord and the Holy Theotokos, remembering her intercession when Moscow was saved from the Tamerlane’s army in 1395. Vladimir icon When the river began to freeze, and the Russian army feared lest the Mongols cross it on the ice, Prince Ivan III ordered that the troops retreat to the town of Borovsk so that they take a better position and prepare for the key battle. The Horde’s warriors did expect the freeze—which came early that year—boasting that all roads to Russia would be open for them, when the river would be covered with ice.

Suddenly, Akhmed began to hurriedly recede to the Great Horde. Soviet historians considered this as Ivan III’s military tactic. The Prince involved his ally, Crimean Khan Mengli Giray, into the battle; he attacked Podolie, distracting the Polish forces and arranging that a notable Russian troop sieze the Great Horde’s unprotected capital. We can go on hypothesizing to guess the Tatar army lacked either warm clothes or food for the horses. But a contemporary of those times, the author of the Tale of the Stand of the Ugra River, explains Ahmed’s retreat by a glorious miracle worked by the Holy Theotoko: “After our troops moved back from the bank, the Tatars, gripped by fear, began to flee as they thought the Russians had receded to circumvent them1. The Great Horde faced unrest when Akhmed came back. He was soon murdered by Ibak, the Nogai Khan, and the country was overcome by a civil war.

Meanwhile, Prince Ivan safely returned to Moscow, having reconciled with his brothers after years of enmity. The Great Stand on the Ugra River marked the end of the Tatar-Mongol yoke, the Russian state strengthened and gained full sovereignty.

Some may claim it was no miracle, that it was a mere coincidence and good military policy. But if we look closer at the climate in the country, we can suppose that the Ugra Stand could have had a different outcome.

Very few of the nobility were determined to defend their Motherland. Many of those who were closest to the prince advised that he save his life by fleeing, leaving the Moscow lands for the Tatars to plunder. The chronicler heavily berates the “rich and stout” advisers of the Great Prince for their faint-heartedness and seeking of personal interests, and calls the boyars, who collected taxes, “Christian blood-suckers”. Though they were Orthodox Christians they behaved worse than the Tatars, and “loved women more than their Christian faith and Orthodox churches; they agreed to betray their faith because malice had made them blind.”2

Having sent his wife, the Byzantine princess Sophia, and the state treasury to a safe place, the Grand Prince was doubtful as well. This is why the monarch’s patriotic spiritual father, Archbishop Vassian of Rostov, turns to Ivan III in his Letter to the Ugra, urging him not to be afraid of the myriads of the Tatars and not to think in his heart, “I have a wife, and children, and great wealth; should they invade my land, I will settle in a different place.”3 On the contrary, the Archbishop inspires the Prince to repent of his sins and, like Joshua and other judges of the Old Testament, rely on God, becoming the Gospel’s good shepherd who gives his life for the sheep (Jn. 10:11). The Lord sends angels and saints to help those who beg Him for help. Should any of the warriors perish, their death in a fight against the godless Hagarenes will be considered martyric, their sins will be forgiven and they will abide the Heavenly Kingdom. 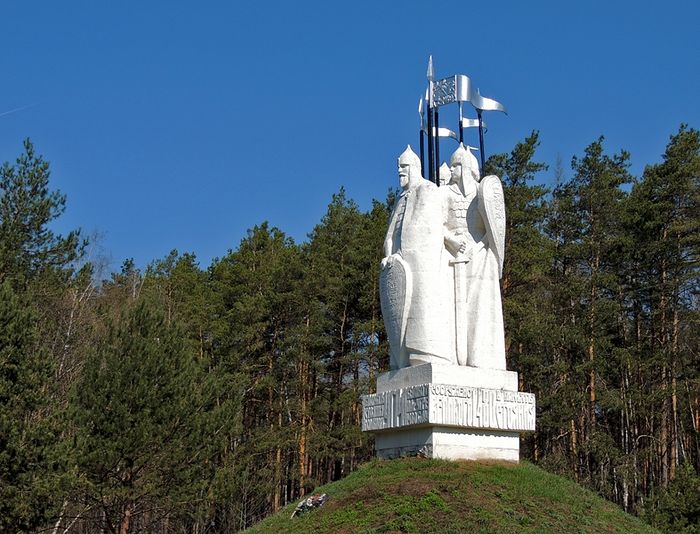 “O, you brave, courageous sons of Russia,” implores the author of the Tale of the Stand on the Ugra River, “toil to defend your fatherland, the Russian land, from the unbelieving. Do not be afraid to lay down your lives lest your eyes see your houses pillaged, and wives and children abused, as other glorious lands have suffered from the Turks... They died, and ruined their fatherland, their land and country, and they roam throughout foreign countries, condemned, and chastised, and despised for lacking courage.4"

The urgent pleas, made by the patriots, must have had their effect. A son and a brother of the Grand Prince, who were in charge of the troops in the battle zone, did not retreat in the face of the prevailing enemy. Soon the Grand Prince joined them. Though there was no full-scale war, the Russian forces came out as winners in the Great Stand on the Ugra river.

Nevertheless, “the unconscious should not glorify their foolishness, saying, ‘We delivered the Russian land with our own weapons,’ as the chronicler would later define the events, saying that it was the Lord Who saved the Russian people. “Neither an angel, nor a man saved us, but the Lord Himself saved us through the intercession of the Most Pure Theotokos and all the saints.5”

The holy Archbishop Vassian wrote that the Savior and His Most Pure Mother saved the Russian land multiple times, when the people turned to repentance and prayer. But for “despair and weak faith”, the Lord, on the contrary, tolerated the invasions of such bandits as Batu Khan6.

The miracle of the intercession of the Theotokos was even disregarded by a number of chronicles. The miraculous outcome of the potentially bloody battle looks like a lucky coincidence. But even if we put God’s supernatural intervention aside, we see how different the two moral stances are. On the one extreme, some people are ready to flee like cowards and let their compatriots fall into to the bandit’s hands, taking care of their personal wealth; the others are adamant in laying down their lives for their faith, families and Fatherland, hoping in God and the Heavenly Kingdom.

The citizens of the city of God are the leaven that leavens the whole lump (1 Cor. 5:6), a city that is set on a hill (Mt. 5:14). They are called to be the light of the world, reflecting the light of Divine Truth.

The miracle we commemorate today is a high example of courage in the faithful. This is a reminder to their descendants that we must endeavor to save our homeland in times of nationwide trouble. But, applying all our effort and professional skills, we should remember that it is God Who saves man.

May the Lord, through the prayers of His Most Pure Mother, preserve our homeland from enemies, and strengthen our faith so that we, guarded by this faith, would have the courage act not only in times of trouble for our nation, but even in our daily life, when it depends on us whether justice, mercy and love might be multiplied in the world.

1 The text is cited after the compilation For the Russian Land! Literary Works of Ancient Rus’ of XI-XV Centuries (in Russian). Moscow: Soviet Russia, 1981. Electronic resource: http://www.spsl.nsc.ru/history/descr/leto1480.htm [accessed June 5, 2016]. The Mother of Each of Us
Met. Tikhon (Shevkunov)

The Mother of Each of Us
Homily on the feast of the Vladimir Icon of the Mother of God
Metropolitan Tikhon (Shevkunov) of Pskov and Porkhov
Rational people cannot understand this, and our Protestants can’t make sense of it. How could it be, and why? If a person has sinned it means that legally he should be punished; that is for his own good. And suddenly the Most Holy Theotokos intercedes for the Orthodox! Well, why on earth, this is not fair, it is not legal, not correct. She Who Possesses the Fullness of Gifts
Hieromonk Nikon (Parimanchuk)

She Who Possesses the Fullness of Gifts
Homily on the commemoration of the Vladimir icon of the Mother of God
Hieromonk Nikon (Parimanchuk)
A multitude of testimonies to her help have been preserved to our present day. “The Mother of God answers repentant tears.”
The Meeting of the Vladimir Icon
Archimandrite Tikhon (Shevkunov)
That is how Moscow was saved by a miracle of God; the house of the Mother of God—Russia—was saved. If Tamerlane had destroyed Moscow then as he had destroyed the Indian and Persian cities, who knows what would have happened to Russia.
Comments