The Nativity of St John the Baptist

From a sermon by the Venerable Bede Venerable Bede is an Anglo-Saxon saint of the pre-schism Church. He was born in around 673 in Northumbria, and was sent to a monastery for his education at age seven. He remained in the monastic life, and is best known as a Church historian, who wrote the famous History of Christianity in England.

The Angel appeared to Zacharias in the sanctuary of the temple at the right side of the altar of incense.

Which same was fitting, thus he appeared in the sanctuary because he came to proclaim sacrifice; and at the right side thereof, to indicate how joyous was the honor about to be bestowed on mankind by the heavenly gift. The right side is the side of honor, and therefore words indicating a position at the right hand are often used to signify an eternal good, and by the same token, to be at the left side doth sometimes signify only present good.

As for example whereto the Book of Proverbs singeth thus in praise of wisdom: “Length of her days is in her right hand, and in her left hand riches and honor.” Venerable Bede. Icon by Sr. Jeana Visel, Saint Meinrad Archabbey Library Gallery. Photo: DuBoisCountyHerarld.com. First of all the Angel comforteth the trembling Zacharias. Fear not, saith he. For just as it is natural for human frailty to fear spiritual manifestations, so it is natural for Angels to comfort with good words the mortals that be in this wise fearful.

Contrariwise, when the devil perceiveth that his audacious manifestations do frighten, he proceedeth to frighten as much as he can, and that with an increasing fearsomeness. There is no better way to overcome his workings than by a courageous faith.

We are not to understand that he had been praying for the birth of a son whilst he was offering the sacrifice according to the liturgy of that time, for we are told that he had given up hope of a son, and no one prayeth for that which he hath no hope of obtaining.

Yea, so hopeless was he of ever having children of his own, because Elizabeth was barren, and they were both now well stricken in years, that he did not even believe the Angel’s promise.

Therefore the words of the Angel: “Thy prayer is heard”, refer to the redemption of the people, for which Zacharias had prayed in the pleading of the sacrifice.

And the words “Thy wife shall bear a son” do shew forth the manner of that redemption, for he addeth that the son of Zacharias shall go before the Redeemer as a herald, to make ready his way amongst the people.

Thus, in this saying that the prayer of supplication offered by Zacharias was heard of God, the Angel sheweth in what manner the people can be brought to salvation and perfection; namely, by repentance at the preaching of John, whereby they are to be led to faith in Christ.

But Zacharias hesitateth because of the sublime things which have been promised. Wherefore he asketh for a sign, that he may believe, albeit the coming of the Angel and his words of promise ought to have been a sufficient sign. Hence he was stricken dumb as a just penalty for his slowness of belief: to be dumb was both a sign to stir him up to the faith which he sought, and the penance which he deserved for his unbelief.

We may thus understand that if a man of earth had promised such things, it would be lawful to seek for a sign, but that when an Angel is sent from heaven to give God’s promise, there should have been no occasion for doubt.

And yet the Angel giveth the desired sign, so that he who spake from disbelief may learn from silence to believe.

Note that the Angel saith, “I am Gabriel, that stand in the presence of God, and am sent to speak unto thee these glad tidings.” Doubtless when Angels come to us they fulfill this active and outward ministry in such a way that yet do always remain in God’s presence by contemplation. Wherefore, they stand in his presence even though they be sent from him on a mission. An Angel is a created spirit, and therefore hath many limitations. But God hath no limitations, and is everywhere. Thus when he sendeth his Angels from his presence, they yet do stand therein, for whithersoever they go on a mission, they go in him.

Expositio in Luc. I. II. From the Anglican Brevary. 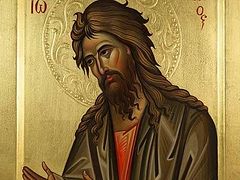 Homily for the Nativity of the Prophet, Forerunner, and Baptist John in the Orthodox Church

Homily for the Nativity of the Prophet, Forerunner, and Baptist John in the Orthodox Church
Fr. Philip LeMasters
The same God who worked in such outrageous ways through St. John and his parents continues to operate in our lives, our church, and our world. And He calls each of us to do what Zacharias originally failed to do: to believe and obey that salvation and blessing really are for us, that we have a unique role to play in how the Lord redeems and heals His good creation, here and now, today, in our generation. 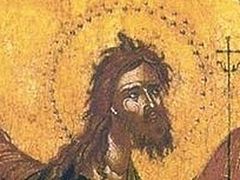 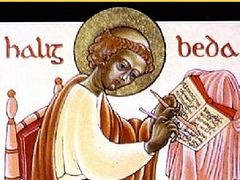