Instruction on Holy and Great Tuesday 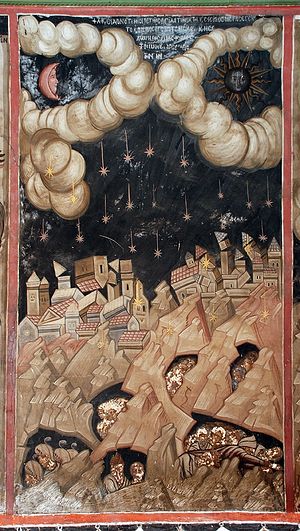 A scene from the Apocalypse. Dionysiou Monastery, Mt. Athos You, Christian listeners, heard the Gospel reading at the Liturgy yesterday. Do you remember what Christ said to His disciples as though incidentally: Then shall they deliver you up to be afflicted, and shall kill you: and ye shall be hated of all nations for My name's sake. And then shall many be offended, and shall betray one another, and shall hate one another (Mt. 24:9-10)?

What time did He mean? The time before the destruction of Jerusalem and the Temple, and ultimately before the end of the world and Doomsday. Who will be hated by all the nations? The apostles of Christ, their successors, pastors, the Church teachers, and Orthodox Christians all together will be hated. For Whose name’s sake will they be hated? For His name, for the name of our Lord Jesus Christ. And who will betray and hate each other? The same people who will come to hate the apostles and their successors. First they will hate them, and then will come to hate one another.

This was precisely what happened just before the destruction of Jerusalem and the Temple. The apostles and their successors were hated, persecuted and murdered everywhere, and afterwards the persecutors themselves began to hate one another. It took place before the destruction of Jerusalem and its Temple; and, undoubtedly, these things will be repeated before the end of the world and Doomsday. Such things, dear listeners, always happen before great social disasters, before the fall of empires and nations. First people conceive a hatred for spiritual figures and pastors of God; then, once godlessness and depravity have become prevalent because of hatred for the Church, these people will begin to hate each other, betray each other, and rise against each other; and this is followed by social disasters leading to the fall of a godless and depraved society and the destruction of their kingdoms. Read the history of these catastrophes and downfalls and you will see that godlessness and depravity, those heralds of social calamities and downfall of kingdoms, have always began precisely with hatred for spiritual figures. That is why the enemies in societies first and foremost strive to provoke hatred in people for Church figures and those who serve at God’s altar. Without the light of God, in the darkness of unbelief and debauchery, it won’t take people long for people to start hating and attacking each other. And after that of course everything will break down, go to ruin, and fall… Everything will fall and nothing will survive except perhaps something for the few chosen ones, or saints, or some great shrine.

Thus, dear listeners, fear hating the spiritual. This hatred inevitably triggers unbelief and corruption in society, and this bring social disasters upon nations. Private households fall and grow poor for the same reason. A household grows, flourishes, becomes rich and abounds in everything. But its residents begin to cool off to the Church, they begin to hate its pastors secretly and openly, abusing, persecuting them by word and deed; and eventually they begin to lose interest in their occupations and become indifferent to each other. Then this household will inevitably come to grief; and if it doesn’t fall immediately, that will only be thanks to some great relic in this home, or some righteous family member, or for the sake of a chosen one in this household, and its inevitable ruin will temporarily slow down.

And the stand of every kingdom and every house depends on the presence of holy seed in them. Holy seed guarantees that the world stands. Heaven and earth shall pass away, but My words shall not pass away (Mt. 24:35), proclaims the Lord Himself. Amen. Purveyors of Dead Souls?
Sergei Komarov
It seems that the massive manipulation of consciousness is the purchase and sale of human souls in our days. I purpose to test this thought, by looking at the portrait of one of these types of modern merchants. Watch!
Archimdrite Kirill (Pavlov)
Now more than ever we must remember this admonishment, for especially now many are dormant and sleeping. The sleep of the soul is not bodily sleep, which strengthens the body, but rather, it is an unhealthy sleep, a painful slumber in which people chase after vanity, thinking they are living a true life, forgetting about the soul, about God, and about the future eternal life.
Comments
×