The Doubts and Faith of the Apostle Thomas 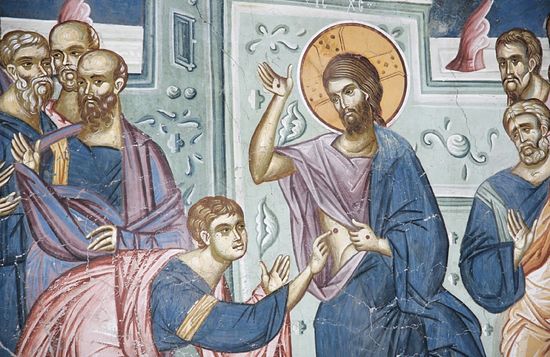 This Sunday is dedicated to the Apostle Thomas, who is popularly known as “Doubting Thomas.” What did Thomas not believe: That Jesus had risen from the dead? Or that the other disciples had seen Him risen?

The name Thomas is of Hebraic origin, meaning “twin” (תומא). It is quite possible that the Apostle was originally a fisherman (cf. Jn. 21:2). Thomas was called by Christ to become one of the Twelve Apostles (cf. Mt. 10:2-4, Mk. 3:14-19, LIk. 6:13-16). When Lazarus died, and Jesus, Whom the Jews were already hunting, headed for Jerusalem, Thomas expressed his desire to follow Christ and die with Him (cf. Jn. 11:16). During the Lord’s parting conversation with the disciples, Thomas asked: How can the Apostles know the way of the ascent of the Son of Man to the Heavenly Father? (cf. Jn. 14:5).

According to the Gospel of John, Thomas was absent on the day when the Savior appeared to the Apostles after His Resurrection from the dead. He did not see the Risen Christ and he doubted: Except I shall see in His hands the print of the nails, and put my finger into the print of the nails, and thrust my hand into His side, I will not believe (Jn. 20:25). When Jesus appeared to the Apostles again after eight days, He offered Thomas to put his hand in His ribs. The Gospel does not tell us in detail whether Thomas truly put his finger in the Savior’s wounds or not. Blessed Theophylact of Bulgaria believed that Thomas touched Jesus’ rib.1 In Lopuchin’s Explanatory Bible, Thomas refused to touch the wounds on Christ’s body. Having seen the living Christ with his eyes, Thomas exclaimed: My LORD and my God! (Jn. 20:28).

The literalness of the description of this event should convince us that, despite the Savior’s appearance among the disciples behind closed doors, His body was not a phantom. It was the same Jesus upon Whose breast the beloved disciple had recently reclined. It was the same Jesus Whom they beat, led to Golgotha, and crucified. Although His Body was not found in the grave on the third day, Mary Magdalene saw Him, the Myrrh-bearing Women clung to His feet (cf. Mt. 28:9), He broke bread with the two travelers in the village of Emmaus (cf. Lk. 24:30), He showed the apostles His wounds and ate baked fish before them in the Upper Room to prove that He was not a ghost (cf. Lk. 24:42-43) but the Son of God come in the flesh (2 Jn. 1:7).

“Doubting Thomas”—the unbelieving—the Church calls the doubting Apostle. If we think back to Apostolic times and put ourselves in Thomas’ place, we will understand that it wasn’t so easy to believe in the good news of the resurrection of a man from the dead, because before Christ no one had been resurrected. Thomas went the way of an academic scientist: He wanted to conduct a natural science experiment that would give him a sufficient amount of convincing evidence. The Savior gave Him the chance, showing His arms and ribs.

If the preeminent Apostle Peter confessed Christ only as the Son of the living God (Mt. 16:16), then “Doubting Thomas” directly called Him LORD and God (Jn. 20:28). Moreover, Thomas addressed the Savior with the words, My LORD and my God, emphasizing his relationship with Christ as “my” personal Teacher, Savior, and God.

Thomas’ disbelief was not a stubborn unwillingness to accept the evidence of eyewitnesses. It was a thirst for faith that sought support in visible evidence. Thomas didn’t want to blindly accept something on faith; he wanted to know the Way, the Truth, and the Life (Jn. 14:6). He didn’t remain silent about his doubt because he was not indifferent to faith. He was interested in a real encounter with God, and not blindly following someone’s beliefs. And therefore his “unbelief,” however paradoxically, had a beneficial effect on all the people around him.

In the hymns of today’s feast, “Thomas’ unbelief” is called good, because it “led the hearts of the faithful to knowledge.”2 Thomas’ faith proved to be so deep that he went to India to preach the Risen Lord, where he later received a martyric end (c. 70 AD).

Unfortunately, in our days there are many examples of complete disbelief in God or examples of nominal, dead faith.

One of the modern myths is the idea that the religious worldview is based on an unqualified faith in authority, while the secular consciousness is based on a healthy skepticism and rationalism. However, so-called “critical thinkers” today absolutely do not understand even the basic principles of religion, having never thought seriously about faith; they reject religion on the basis of clichés taught in Soviet schools. On the contrary, in our times, it is those who truly question atheistic prejudices and critically look at their lives who come to faith.

There are those whom we can call believers in name only. These are those who have been baptized but don’t know the basics of the faith and the rules of the spiritual life. Such people don’t see many sins in themselves and don’t feel the need for repentance. They explain their absence from church on Sundays by some insurmountable obstacles: They’re loaded down at work, they have to go to their dacha, they have to visit relatives… Such people rarely want to change their habits but they can be quite obsessive about instilling religion in the household. Check in your own life if there are such people among your acquaintances who rarely commune, but on the other hand, annoyingly repeat to their other halves that they have to go to church for confession. External religiosity, hypocritical obsession, and even aggression in preaching the faith can not only repel, but even cause a feeling of hostility from friends, co-workers, or close relatives.

Both categories—non-believers and nominal believers—are convinced that they’re right, even if this rightness is built on solid doubts. They don’t subject their beliefs to criticism, don’t ask themselves difficult questions, don’t try to make any adjustments to the trajectory of their spiritual lives.

An unbeliever often stubbornly resists God, but, on the other hand, easily believes in all sorts of nonsense, especially if it has a pseudo-scientific explanation. “No one is so gullible as an unbeliever,” wrote St. Irenaeus of Lyons in the second century.

Nominal believers recognize the existence of God, of course, but don’t turn to Him in prayer. That means that God for them is a fact requiring nothing of them. Such people’s life paths do not intersect with God. If an internal crisis occurs, resentment arises against God for their fate, sicknesses, and failures. They don’t try to bravely overcome their doubts, to learn to rise above them; stagnation and persistence in doubts leads such nominal believers to despondency, depression, and even to a loss of faith in God.

Metropolitan Benjamin (Fedchenkov) expressed a rather bold idea about this: “In a state of maximum failure, of complete darkness, of the feeling of God’s absence, we understand Who is not there: God. That means God exists.” Vladyka Benjamin also wrote about the benefits of testing your faith: “Living faith is always accompanied by actual or potential doubts. If doubt does not exist, then, as a rule, we are dealing with tradition, that is, a man simply testifies to the experiences that his predecessors had, but he himself has not grasped this experience.” This means that the spiritual life is a creative search for truth, a constant examination of the state of your soul, and not just a standard set of prayers to be read every morning and evening.

Of course, doubts about the existence of God or instability in faith are condemned by the Apostles (cf. Rm. 4:20, 14:23, Jas. 1:6, cf. Mt. 16:3). However, doubts about our supposed righteousness, a critical view of our hobbies, and a sober attitude towards successes and failures in the spiritual life can all acquire the character of spiritual discernment with the help of prayer.

Dear brothers and sisters! Today the Church reminds us not only about Thomas, but also about man as a whole—about each of us and all of mankind. We don’t have the opportunity to put our fingers into the wounds of Christ, but Christ Himself promised us: Blessed are they that have not seen, and yet have believed (Jn. 20:29). Because of our unbelief, the Lord does not work a miracle (cf. Mt. 13:58), but if we have faith the size of a mustard seed, then we’ll even be able to move mountains (cf. Mt. 17:20). Whether we will be Christians in name only, or, conversely, will exclaim together with the father of the sick boy: Lord, I believe; help thou mine unbelief (Mk. 9:24), depends on us.

May the Risen Lord who illuminated the heart of St. Thomas enlighten our hearts also, so we can follow him in the search for our personal Savior—our Lord Jesus Christ, and that together with Thomas, we would be able to confirm without any hesitation that “the Lord is my God!”

1 The same thing is chanted in the second stichera of the Great Vespers of Antipascha. Can Doubt be a Virtue? Pastors’ Answers

Can Doubt be a Virtue?
Pastors’ Answers
Last Sunday was dedicated to the memory of the apostle Thomas who doubted in the Resurrection of Christ. His doubt served for the glory of God. We decided to ask our pastors in which situations doubt or skepticism can be a virtue, and in which not? We Are More Blessed Than the Apostles
A Homily for Thomas Sunday
Hieromonk Ignaty (Shestakov)
“The fathers of the Church say that this bliss is a pledge of great blessings for us, perhaps greater than the holy apostles were accounted worthy of, but on condition that we, like the apostles, full of this blessedness, must give our entire lives to Christ, and serve His Gospel evangelism. This is the condition for felicity. Such a great gift the Lord gives us: We are more blessed in this world than the apostles.“
Comments

Joseph Bell4/26/2020 10:23 pm
I agree with Metropolitan Benjamin, that we know God is real sometimes by His absence. How many instances in life do we have a person close to us but not fully appreciate them until they are gone? Our Lord questioned Philip, "Am i with you so long a time and you have not known me, Philip?" John 16:9 And isn't a hole in one's hand or side also an absence? It is an indentation, lost or damaged tissue. The approximate size, I dare to say, resembles that afforded to us at Holy Communion. The message here is of course one of radical repentance after time many of the faithful have had to forgo Holy Communion and there is a hole inside us. A time many of the clergy have wondered, what has become of their flock.
×