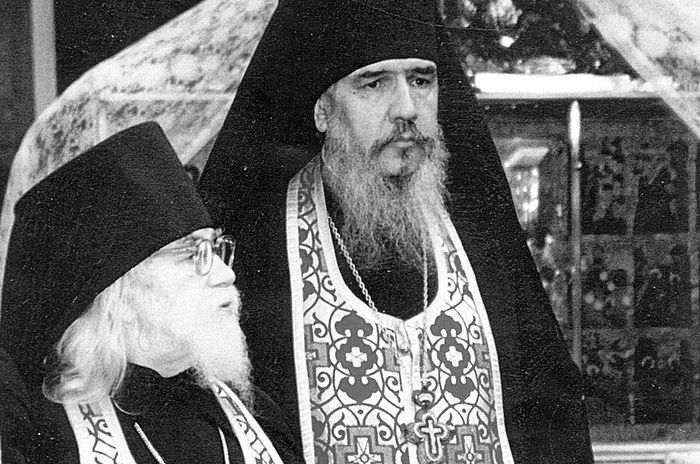 I was born and raised in the bosom of the Georgian Orthodox Church. I attended a Russian parish and studied at a Russian school from childhood. In my youth, although I had a great desire to, I didn’t have the chance to visit the monasteries and churches of Russia. I wasn’t able to fulfill this desire until 1972-1973, when I was already a priest.

Having heard a lot about the Pskov Caves Monastery and its elders, I went to Pskov, and from there I went to Pechory, to the monastery, with the blessing of Metropolitan John. And there, in the monastery, I was vouchsafed the grace of God—I met with the elder Fr. John, still quite lively and sociable at that time.

I asked to see Batiushka, although many told me it wasn’t possible. Many people want to see him, and you just arrived and want to see him immediately. Nevertheless, Batiushka received me and spoke with me for a long time, giving spiritual instructions. He received me again during this trip, and when I left for home, he sent a gift with me for our patriarch. Ever since, I have tried to go to the monastery on the feast of the Dormition whenever possible.

In 1986, I went to Pechory with my mother and one of my novices. The day we went, they were commemorating the fortieth day of the repose of Bishop Theodore, who had lived at the monastery in retirement. We found out that Batiushka was going to serve a panikhida in the caves where Vladyka Theodore was buried. We venerated the icon of the Dormition of the Mother of God and began to wade through the crowd of pilgrims to the caves. They were closed—they were waiting for Fr. John. There was no hope of getting in, but we hoped to at least see Batiushka.

Then suddenly the crowd began to stir: “Batiushka’s coming, Batiushka’s coming,” and everyone began to part, creating a corridor for him to get through. Finally, Fr. John appeared, with a kind expression on his face as always, as if borne aloft on wings, accompanied by his novice Vanya (the future Archimandrite Philaret). “Lord, help me get close to Batiushka!” Looking at him, we saw light and purity on his face, and we saw his mercy and love for all of us. Everyone was warmed by his smile. He unexpectedly took my mother by the hand, and the three of us went with Batiushka into the caves. I also got to go see him again that same day. He blessed me and we had a long conversation. He said to me in parting: “I’m always glad to receive guests from Georgia.” And to the brethren he said: “They’re from the country of Iveron1—we have to receive them.” Thus our love and warm relations with the Elder were sealed.

My annual trip (I’d like to go every month) bound me not only to the Elder and the monastery, but to the brethren as well. They were kind and welcoming men of prayer. However, sometimes my arrival caused jealousy. The brothers would jokingly say: “Forget it. Until the Georgian leaves, you can’t see Batiushka.”

These trips have become a necessity for me. I always went to see Batiushka at least once a year, for the monastery’s patronal feast, and received his guidance and answers to all the questions I couldn’t resolve myself. Once, in the presence of several brethren, I said: “When I come to see Fr. John, I fill up my tank for the whole year.” After that, they would greet me when I arrived at the monastery, saying: “He came to fill up.”

I always felt enriched when I left the monastery. I’ll never be able to forget all the love and warmth that Fr. John showed me. Already an elderly man and tired after the All-Night Vigil (which ended very late in the monastery), Batiushka would whisper to me: “Go drink some tea and then come to my cell. We’ll talk.” Sometimes these conversations would last until two or three in the morning. But not only did I not get tired, I didn’t even want to leave. I was afraid to move too much, being there with such a father and spiritual guide. I absorbed every word from Fr. John. Unfortunately, due to my youth, I didn’t fulfill everything, but, in any case, Fr. John became a dear guide for me. All this went on for many years; his fatherly love strengthened me, and I began to sense a change for the better in myself both as a Christian and a priest, thanks to Fr. John.

I was always surprised that Batiushka was always the same. He never scolded anyone, but it was enough for him just to look at you and he would immediately understand if you were right or wrong.

There was one very interesting story. Already in deep old age, Batiushka had gone on a short so-called summer vacation. It so happened that I arrived and he wasn’t there. It’s not hard to imagine how I felt—I came to enjoy myself, to be spiritually nourished, to drink from the living water, and my nourisher and source was not there. Dejected, I went to Batiushka’s cell and met with his assistant, Mother Maria (she had an interesting last name—Vladyko). And she advised me: “How sad that Batiushka isn’t here. But at least go into his cell, Father, because he is here in spirit. Pray and talk with him.” I went into his cell, made three bows as always to the prayer corner, and sat down on the couch where I had talked with Batiushka for so many years. It’s hard to imagine what happened to me in these minutes. I never left the monastery with such joy and such richness as I did that year. I marveled: “What are you so happy about? You didn’t even meet with Batiushka.” But my whole soul was filled with joy because I, without even having seen him, could sense him as I sat there on the couch.

Batiushka was getting older, and I started going to the monastery less often. After my last trip to the Caves Monastery, upon arriving in Moscow, I had a cardiology exam, and they suggested I have heart surgery. I said: “I can’t give consent without the blessing of my patriarch and elder.” They gave me a deadline of two weeks and I went home. I came back two weeks later for the surgery. I wasn’t afraid—I knew my dear Batiushka and all the brothers were praying for me. The Elder’s prayers are holy. I had to shave my beard before the operation and they told me I should eat fatty foods and meat, but it was Great Lent. I absolutely refused and didn’t know what to do. May God bless Fr. Tikhon, the abbot of Sretensky Monastery,2 who greatly helped me in these difficult days and months. He called Fr. John right there from the ICU, and Batiushka spoke with me. He said five or six words to me then—they don’t need to be published—but they evoked both tears and joy. I felt Fr. John’s fatherly care and intercession.

I went in for surgery without any fear. The only thing I feared and asked the Lord about was that there would be no murmuring. The Optina Elders write: “Grant me, O Lord, to accept everything as being sent from Thee.” I thank the Lord that throughout the entire five months I spent in the hospital (including fifty-one days in the ICU), I never once complained, but always had before my eyes my dear batiushka Fr. John, who supported me in spirit, who prayed for me. I believe he is still praying, because I was able to say the words, “Christ is Risen!” again, although there had been very little hope for my recovery. The Lord gave me health through his prayers.

I could talk about Fr. John not just for hours, but years. But the amazing thing is that everything can be said in two words. He bore the spirit of his patron—the Apostle of Love St. John the Theologian. And indeed, both old and young came to him with boy joy and woe, and all received consolation.

I remember when two Russian nuns in my parish in Tbilisi asked a blessing to go to Russia. I decided to send them to Fr. John to seek his counsel, and I myself prayerfully entreated God that Batiushka would leave them with me. Fr. John received them with joy, heard them out, and said: “Stay with your batiushka until the end.” And that’s what happened: I buried both of them, Mother Askitria and Mother Anastasia. May they inherit the Kingdom of Heaven! This was another way that Batiushka helped me. It would have been difficult for me without them.

That’s what I wanted to say about Batiushka John. I repeat: I could talk about him for years and not still not have expressed everything we received and receive from him. Sometimes it seems to me that Fr. John is a celestial being sent to us from Heaven for edification, teaching, and strengthening. And I firmly believe that after his departure to the other world, Fr. John never leaves us without his fervent prayer. This inspires me and gives me strength to serve the Mother Church with humility and a sense of responsibility to the Lord and the Elder.

2 Now the Metropolitan of Pskov and Porkhov and the abbot of the Pskov Caves Monastery—Trans. The Elder, Archimandrite John (Krestiankin)—a Video. For His Repose Day

The Elder, Archimandrite John (Krestiankin)—a Video
For His Repose Day
Anyone who ever had the blessing to meet Fr. John when he was still with us can tell you that the grace pouring through this man was indescribable, and something that one remembers, even lives by, for the rest of his life. “A True Christian Always Bears Fruit”
A sermon given in the Pskov-Caves Monastery on February 5, 2019, after the Liturgy on the anniversary of Archimandrite John (Krestiankin’s) repose
Metropolitan Tikhon (Shevkunov) of Pskov and Porkhov
Whether ill or healthy, tired after many hours of receiving hundreds of people day after day, or filled with strength after a brief rest in prayer, Fr. John was transformed when he heard God’s voice telling him that he must fill people, strengthen them with the fruits of his spiritual life. Archimandrite John (Krestiankin) as a Healer of Modern Temptations
Yuri Maximov
In his instructions Fr. John was able to point out the more essential temptations that an Orthodox Christian faces today.
Comments
×