Homily on the Day of the Beheading of St. John the Forerunner

Today the Orthodox Church remembers how the evil Herodias murdered the great prophet of God, John the Forerunner. As the Holy Gospel tells us, Herod King of the Jews took to himself his brother Phillip’s wife Herodias, who had a daughter, Salome. St. John the Baptist rebuked Herod for this unlawful cohabitation. Evil Herodias harbored a grudge against God’s prophet, and wishing to kill him, influenced Herod so that he would put the Forerunner in prison. And then came an opportunity to destroy the man of God. The dance of Herodias’s daughter and the beheading of St. John the Forerunner. Fresco.

The king held a feast, and Herodias’s daughter Salome entered and danced for the guests. Salome’s dancing pleased Herod and he, drunk, swore to give her anything she asks, even half his kingdom. Salome took counsel with her mother, who instructed her to ask for the head of John the Baptist. This request saddened the king, but for the sake of the oath he fulfilled it. John was beheaded with a sword. Herodias had done her evil deed.

Evil Herodias lives even now in the heart of every woman—this is satan, who lures the woman into doing what God has not given to her: to rule over her husband.

Even virtuous women have the inclination to rule, but they struggle against this vice. Those who have no husband also want to rule, either over their families, or over their neighbors. Much evil has been wrought on earth by this satanic ruling over husbands on the part of women. All of sacred history is filled with it, and in fact the entire history of the world.

Thus, evil Jezebel continually persecuted and pursued the holy prophet of God Elias for his telling the truth. Ahab was not a bad king, but his wife Jezebel wielded such strong influence over him that she turned him away from the true God, and he turned the whole nation away, drawing them into idolatry.

Samson loved his wife, and she loved him; nevertheless she betrayed him to death.

“It’s better to live with an asp—the most dangerous snake—than to live with an evil wife”, says the old Russian proverb. And there is another Russian saying: “Wherever a wife doesn’t manage, there goes satan.” Such evil, cunning wives mostly influence corrupt husbands, as Herodias did Herod, because he was a lover of money, a fornicator, and a drunkard. They take advantage of their husband’s weakness and keep them “under their heels”.

A woman’s urge to rule a country is madness. Even Catherine the Great, the wisest of all tsarinas, dropped her hands when a difficult military situation arose. The great Russian military commander Suvorov came to her and crowed like a rooster, saying that a hen is not a bird, and a woman is not a man. Women, you should not be offended at this because a woman is not a whole but rather part of a whole. A part cannot be the head. For example, the eyes remain eyes, the arms remain arms, and the legs remain legs. These parts, as well as other parts of the body, cannot be the head. A woman is a part, and not a head. The head is the husband.

In the Gospel it is written that the Lord fed five thousand in the wilderness, besides women and children (Mt. 14:21). The wife should know why she was created, and know her appointed duty. She is her husband’s helpmate; she must raise the children in the fear of God. Those Christian women who understand this duty are good mothers, sisters, and wives. And blessed are they who accept this and do not try to do what was not given to them by God—to be the head over their husbands.

If a husband has such infirmities as drunkenness, the wife must forgive her husband this weakness, because she herself is not without weaknesses. No matter what husband, he is nevertheless the head of the household. He is the master of the house.

Let’s take a look at what happened to Herod, Herodias, and Salome after this terrible, evil deed. They were severely punished by God. The Roman emperor sent them into exile, where they lived out their lives in poverty and dishonor. Herodias’s daughter Salome was walking along a frozen river when the ice cracked, and she danced, flailing her legs underwater while her head was sliced off by the ice. Her severed head was brought to her mother, Herodias, and Herod.

The head of our Christian community is the priests, who lead wives and children to the Kingdom of God and continually teach that we must walk to the Kingdom of God on the path of humility. But amongst our Christian wives there are many evil Herodiases who do not accept the teachings of the priests, but want instead to teach them. However, no matter what kind of man the priest is, he is God’s servant, vested with authority from on high.

I receive stacks of letters from angry women Christians, who want to teach us priests and even threaten us: “If you don’t do what I want I’ll go and complain to the higher ups.” At first I read these letters, and then I began to recognize them by the handwriting; and knowing that there is nothing intelligent in them, only dirt and stupidity, I started throwing them into the wood stove without reading them. And these Herodiases are standing here in our church!

Every monastery has its own typicon, to which we must submit. But some women, both pilgrimesses and locals, want to set up their own order. We serve the brothers’ moleben in the morning, which only the brothers are allowed to attend. But we priests, out of Christian love, allow others to be present at this moleben. But how do these allowed pilgrims behave themselves? They run past the brothers to venerate even the miracle-working icon of the Mother of God and the relics of St. Cornelius, walk around on the solea, kiss all the icons on the iconostasis in the Dormition Church, and walk in places where no one but a priest is allowed to step foot. Brothers also sometimes violate the order, and the order should be this: First the abbot of the monastery venerates the miracle-working icon, then the brothers, and only then the parishioners. We sometimes act harshly by holding back the disorderly, but it doesn’t help—and they dislike us for it.

Christian wives! In order to receive salvation you have to listen only to Orthodox priests, and not to yourselves or someone on the side—especially people in black clothing who often teach others but do not correct themselves. If you don’t understand this, come and ask us in simplicity of soul: “Why are you so harsh?” or something else, and we will explain.

So, let’s be humble, cut off all pride and the desire to rule, and then we will be saved with God’s help. Amen. 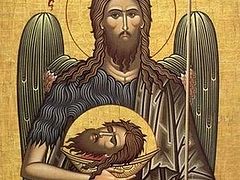 A Festivity of Faithfulness to Truth
Hieromonk Nikon (Parimanchuk)

A Festivity of Faithfulness to Truth
A Word on the Beheading of St. John the Forerunner
Many generations have passed but the memory of the holy prophet lives, because the death of the righteous is a festivity of faithfulness to the Truth living and eternal, to God the Provider and Savior of the world. As the example of this holy righteous one, who by his guiltless suffering only increased his glory, may we all be strengthened in the courage of patience in all that comes to pass with us. 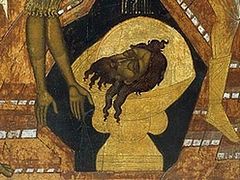 Commentary of St. John Chrysostom on the Beheading of the Precious Forerunner
Matthew 14:1-12
St. John Chrysostom
But not without a purpose doth the evangelist signify the time, but to make thee observe also the haughtiness of the tyrant, and his thoughtlessness, in that not at the beginning did he inform himself about Christ, but after a very long time. For such are they that are in places of power, and are encompassed with much pomp, they learn these things late, because they do not make much account of them. 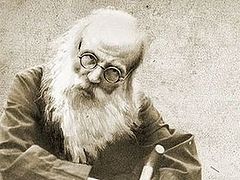 “Try to live so that people depart from you comforted”
Igumen Nikon (Vorobiev) and his instructions
Igumen Nikon (Vorobiev)
The cure for sadness and grief is prayer or psalmody and thanksgiving to the Lord. If you compel yourself to read the Psalter with attention and intersperse it often with the Jesus Prayer and prayers to the Mother of God and all the saints, then your grief will subside and you will receive great spiritual benefit.
Comments

Paul9/12/2021 9:07 am
It is refreshing to read a homily not tainted by the modern cult of feminism that has infiltrated so much of the Christian world. That’s not to mention the emasculation of men in popular culture and the glorification of weak effeminate men more interested in their hairstyle than a good days work. Satan is certainly waging war on men. Glory to God for Orthodoxy that so far has stood firm on the God ordained roles of men and women. Nevertheless, speaking as a man, husband and father I believe we must look to ourselves and our own sin. Too often we have abused God’s mandate of headship to dominate and crush women rather than love them as Christ does. We have focused on wives submitting to husbands whist forgetting the second part. As St Paul teaches in the Scriptures we should love our wives as Christ loves the Church - and gave himself for them. The holy apostle commands us to be Christ like to our wives - if necessary to die for them. It is a fearful thing to be a husband! Us men should take the plank from our own eye before being too harsh on the women for trying to usurp us. I speak to myself here more than anyone. Lord have mercy.