A Festivity of Faithfulness to Truth

A Word on the Beheading of St. John the Forerunner 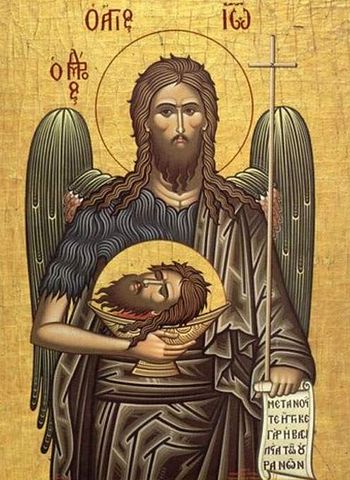 Today is the commemoration of the Prophet, Forerunner, and Baptist of our Lord Jesus Christ, John.

He is commemorated several times a year, and even almost every week, but today is the day of his repose, of his beheading—his most important feast, marked as a day of strict fasting.

“The memory of the righteous is celebrated with hymns of praise, but the Lord’s testimony is sufficient for thee, O Forerunner.”

Thus is St. John the Forerunner glorified in the Church, the memory of whom we now celebrate. But what do these words mean?

They relate to us that the memory of the holy righteous ones is celebrated with praise, but St. John the Baptist received more than praise from men, but received the witness of the Lord Himself that he is the forerunner, herald, and truest prophet of the entrance into the world of our Savior Jesus Christ.

“Therefore, having suffered for the truth with joy, thou didst proclaim to those in hell God Who appeared in the flesh.”

Thus continues the troparion of the feast.

Why did St. John noise abroad to those in hell?

Because he was first, as in the days of his earthly existence, now descending into the murk of hell solemnly proclaiming that here was accomplished the coming of the Savior into the world, Who is shortly coming to slay, to destroy hell with the splendor of the Godhead, to trample down death by death and upon the world grant mercy. But it’s not only in the inferno that St. John the Forerunner preached.

He is so unique in thought and deed in service to the Lord that he terms himself the friend of the Bridegroom (cf. Jn. 3:29), rejoicing in the fulfillment of his prophecy.

In his service he calls to us, as then to his contemporaries, from the desert of human sin and human unrighteousness to holiness, to God.

Amidst the human desert, where all hearts are occupied with vanity, and souls are empty, having nothing sacred, he preached to his disciples the coming of a new world, which, being full of iniquity, we can neither see nor enter therein.

But better would be to be indignant at ourselves as we recall how many times we have betrayed Christ, seduced by the temptations of the world and having not stood firm before the seductions, having consigned to death the Truth, crucifying it in our iniquitous souls.

How many times, like Herod at the banquet, as though in the intoxication of our passions and desires, we have done things for which we were later ashamed and for which we had to repent.

After all, Herod revered, respected, feared and even favored John, but then came a time of temptation. It’s not necessary that it be a time of sorrow, but it can be a time of celebration. “The word ‘celebrate,’” as Met. Anthony of Sourozh wrote, “we have become accustomed to understanding as joy, but it means ‘to remain idle,’ and it’s possible to remain idle when the soul is overwhelmed with joy and you already don’t care about ordinary tasks, but it can also happen when you put your hands down out of fear or grief. And today is such a celebration: what will we take in hand, in light of what we heard today in the Gospel?”

The choice depends on us, but Herod did not choose thanksgiving this day, not thanksgiving to God for having brought him to the light that day (cf. St. John Chrysostom, Homilies on the Gospel of St. Matthew 48), but evil and sin. And the devil, roaring and seeking to destroy the soul, captures the fainthearted, estimating too high the value of his own authority and the value of his word. Himself having become a ruler of the people, he became dependent upon their adulation.

On the occasion of his birthday he gave a banquets for his dignitaries. Banquets are not bad in and of themselves. We know from the Gospels about the wedding banquet, as an image of the union of man with the Lord.

But this banquet, about which we heard today, was a defilement of the soul, at which evil was committed. And so when we, or I, are losing heart and when we are deviating from the Gospel, we also become as Herod or Herodias.

These rapid days of our life, as in a whirlwind dancing sweep before us the temptations of the world, seeking to attract the Christians from his internal strictness towards himself.

Many generations have passed but the memory of the holy prophet lives, because the death of the righteous is a festivity of faithfulness to the Truth living and eternal, to God the Provider and Savior of the world. In order to strengthen the fainthearted in the seemingly unjust world, and to reassure the doubting St. John, from prison, sent his disciples to the Savior with the interrogation: Are You the one who is to come, or do we look for another? (Mt. 11:3).

This severe ascetic and faster, this Angel of the desert (Mal. 3:1), sends us, located in the prison of sins, to eternal life—to Christ the Savior.

Convicted of sin, whether by our conscience or that of our loved ones, let us not be like Herodias and hide our denounced sins by another sin—fury, anger, vengeance, guile, and lies, but with gratitude accept all for the correction of our souls.

Herodias sought a convenient opportunity to fulfill her evil, vengeful intentions, and soon such an opportunity presented itself.

Let us seek for situations in which to do good, to offer forgiveness, to give charity, and let’s ask the Lord for this, and the Lord will grant such blessed occurrences.

As the example of this holy righteous one, who by his guiltless suffering only increased his glory, may we all be strengthened in the courage of patience in all that comes to pass with us.

The name of this holy Prophet, from him and his holy namesakes, is so widespread in Russia that it's accepted as an ancient name native to the people, but in truth it is a Jewish name which means “the grace of God.”

May this grace and mercy of the Man-loving God be with us all, and especially with those who are celebrating their name’s day today. And may it save us and help us in sincere repentance and purity striving to reach the Heavenly Kingdom by the prayers of the holy glorious Prophet, Forerunner, and Baptism of the Lord John. Homily on the Feast of the Beheading of St John, the Glorious Prophet, Forerunner and Baptist of the Lord
St. Justin Popovic
What is this? Could it be that this world has become a madhouse? People do not want God, they do not want the greatest Righteous One in the whole world. Whom do you want? Whom would you prefer? Whom would you set in Christ’s stead? With whom would you replace St. John the Baptist? With yourselves?! О moth! О, tiny mortal insects! Yes, when people become maddened by pride, when out of egotistical pride they lose their reason, they have no need of God, they have no need of God’s Truth. They declare themselves to be gods. They present their petty, shallow, false likeness of truth as the great and salvific Truth. "Orthodoxy, in its endurance and faithfulness to its roots, will always manifest a certain spiritual novelty."
An Interview with Archpriest Artemy Vladimirov

"Orthodoxy, in its endurance and faithfulness to its roots, will always manifest a certain spiritual novelty."
An Interview with Archpriest Artemy Vladimirov
Orthodoxy is not the Russian Orthodox of which St. Seraphim of Sarov spoke as of a retaining wall, but is an entity in and of itself, something that is not necessarily for everyone, but it would be good, living this Orthodoxy, to share it. These treasures will not be taken away from you if you display them, in word, and in deed, and in thought, no?
Comments
×