The Birth of Philosophy at the Tree of Temptation 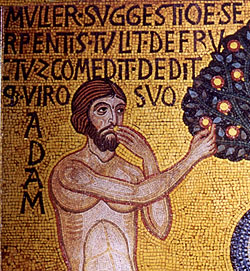 In the book of Genesis, the future history of human thought in its main and fundamental directions is given as if in coded form.

Man is created in the image of God. The image isn’t consubstantial with the Prototype. It is, as it were, a reflection of it, a certain potency with a given goal that must be realized. Here there is harmony and difference between the Godhead and man. The Bible says that God appeared to the original couple in Eden and spoke with them. A Person can talk, that is, enter into dialogue, with a person. Here the personal being of God is revealed as the highest, most perfect, and absolute being. At the same time, the personhood of man testifies to his higher dignity and difference from the other creations, which have inherent qualities, properties, and differences of genera, species, and individuality, but not the category of personality.

Personhood implies freedom of will and moral content, therefore, the image of God in man is his personal freedom as a given, and the likeness of God is the opportunity to determine his relations with God and realize the goal of communion with God, as an approximation of the image to its Prototype.

God gives man a commandment. A commandment is a revelation in the form of an imperative. God reveals His will to man, which he should take on faith to be a blessing. A commandment externally limits man, but internally deepens his being and opens up new opportunities for moral improvement, of obedience to God, and through obedience—to unity with God.

Then a catastrophe occurs in the history of the world—the temptation of man by the serpent and his fall. The demon convinces Eve that God’s commandment was given to deprive people of the chance to rule over their own existence and receive the dignity, prerogatives, and power of God. Eve vacillates. Two impulses arise in her soul, two principles opposed to and battling with one another. Here are the beginnings of moral dualism. Eve ruminates upon the words of the serpent. Faith in revelation, given in the form of a commandment, is opposed to skepticism in the form of rationalism (or rationalism in the form of skepticism). The contemplation of the first people is replaced by analytical rationalism. The cleaving of the human spirit itself begins; the mind ceases to see the essence of objects and turns to the study of properties and qualities, as if gliding along their surfaces, analyzing and synthesizing the phenomena that occur. Eve objects to the demon, but the objection itself is of a rationalistic nature: It speaks to the consequences of sins, but not to its essence. Here rationalism takes the form of pragmatism. The demon promises the Forefathers that they’ll be like God. This seduction of equality with God is repeated in various formulations by all the pantheistic systems. Satan’s lie about man’s equality with God is heard in philosophical and religious systems, where man is attributed with consubstantiality, with unity of nature with the Godhead, or man himself is considered a modality of God. Satan’s call found an answer and response not just in the heart of Eve, but in false mysticism, pagan theurgies, and proud philosophical claims.

Satan tells Eve: “You will be like gods.” Here is the first hint at polytheism—the existence of some unknown gods. False gods are demons, so to become “like gods” means to become like and even equal to demons through disobedience to God and sin. Paganism itself arose from theomachy, and represents the history of demonology.

Eve saw that the fruits of the tree were beautiful and good for food. What does it mean that she “saw?”—she looked with different eyes, turning the inner eyes of her soul away from God, and she saw the world outside of God, creation outside of its Creator. If before the core of man’s life was the commandment of God, which defined his inner and outer life, now man himself evaluates the phenomenon of the world and determines his attitude towards it. The tree is suitable for food. It stops being a symbol of obedience, it loses its metaphysical meaning and turns into a simple object. Here we see a new attitude to life—positivism. Eve sees that the tree is pleasing to the eyes. Having turned away from God, having lost the contemplation of Divine beauty, the soul seeks beauty in objects of this world. Here is the beginning of a new approach to the world, a new view of the world, known as aestheticism or cosmophilia.

Eve plucks the fruit. Pragmatism overcomes faith, and this deadly pragmatism becomes one of the main veins of human history. God curses the demon and condemns him to crawl in the dust of the earth on his belly. Here, through the curse of the demon, the most vulgar of all worldviews is revealed—materialism. The materialist sees only materiality—this cosmic dust and ashes in which his mind spins. He “crawls on his belly,” that is, he doesn’t see Heaven: The spiritual, transcendental world is closed to him. Here physics has completely devoured metaphysics. The materialist crawls on his belly, that is, he seeks a material foundation everywhere; for him, the soul is but a function of the body—a structure built subsequently over the stomach that arose in the process of evolution. Therefore, materialists from Epicurus and Marx to the present day bear the curse of the serpent—to crawl along the earth and not see Heaven.

Thus, in the Biblical narrative about the temptation of the Forefathers, we have the history of the main worldview systems contained, as in a genetic code, with which man tried and tries to fill the bottomless pit in his soul—the loss of God. The Hidden Gospel: A Study on the Book of Genesis
Introduction
Jesse Dominick
The whole of the Gospel can be found in the book of Genesis in a hidden form. It is important because it shows us how God intended man to be, it shows us why we’re in the condition we’re in now, and therefore it helps us to understand why we need Christ—what is it that we need to be saved from. The prophecies of Christ begin immediately after the Fall. If you study Genesis and read the Fathers’ commentaries you can basically learn the entirety of the Orthodox faith. Subhumanity – The Philosophy of the Absurd
Hieromonk Seraphim (Rose)
We must again be Christians. It is futile, in fact it is precisely absurd, to speak of reforming society, of changing the path of history, of emerging into an age beyond absurdity, if we have not Christ in our hearts; and if we do have Christ in our hearts, nothing else matters.
Comments
×