All the Best to God!

On the Feast of the Prophet Daniel and the Three Youths Shadrach, Meshach, and Abednago 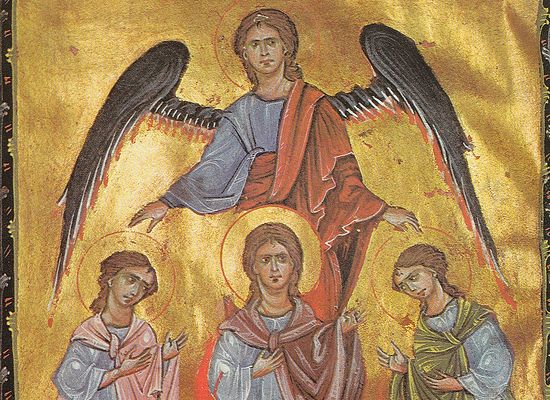 The story of the Prophet Daniel and the Three Youths—Shadrach, Meshach, and Abednago—begins at one of the most tragic moments of the history of Israel. Nebuchadnezzar king of Babylon came unto Jerusalem, and besieged it. And the Lord gave Jehoiakim king of Judah into his hand, with part of the vessels of the house of God, says Holy Scripture, which he carried into the land of Shinar to the house of his god; and he brought the vessels into the treasure house of his god (Dan. 1:1-2).

However, it wasn’t only sacred vessels that Nebuchadnezzar seized. And the king spake unto Ashpenaz the master of his eunuchs, that he should bring certain of the children of Israel, and of the king's seed, and of the princes; Children in whom was no blemish, but well favoured, and skilful in all wisdom, and cunning in knowledge, and understanding science, and such as had ability in them to stand in the king’s palace, and whom they might teach the learning and the tongue of the Chaldeans (Dan. 1:3-4), we read in the book of the Prophet. Thus, the best representatives of the God-chosen people found themselves in the Chaldean captivity. It is said of St. Daniel and his friends that, As for these four children, God gave them knowledge and skill in all learning and wisdom: and Daniel had understanding in all visions and dreams (Dan. 1:17).

In these testimonies of Holy Scripture, one important law of the spiritual life is revealed to us. We see how the best of those who could give their strength to the service of Israel are chosen for Babylon. This has a special meaning, close to every Christian in his everyday life. Its essence is that there is a constant struggle between Heaven and earth playing out in our hearts. Taking every next step in life, we must firmly decide what to dedicate it to, what to expend our strength, our aspirations, and hopes on. At the same time, the world—earthly needs and cares, behind which lurk the devil’s charms, constantly strive to divert all the best powers of the human soul. In the end, we devote our most fruitful hours to work, we sacrifice our most inspired minutes to our hobbies, sometimes to loved ones, and we give our best efforts to something that can bring some definite benefit.

You may be an honest, sincere, moral person, but if you dedicate your main efforts and desires to something other than God, then their destruction is a given.

In principle, this is the essence of human life—devoting yourself to something. We’re created by God to sacrifice, to serve the Creator. Man is by nature a priest. That means he can’t belong to himself, but he can serve his passions, his sinful habits, even ideas, or a worldview. Man can dedicate all the best powers of his soul to these idols. At the same time, the most ingenious invention of the devil is that he was able to convince people that he doesn’t exist, that by serving their impulses, people don’t become his slaves. After all, you can be an altruist, an exemplary citizen, an honest, sincere, and moral man. But the meaning remains the same—you’re devoting your main strength and aspirations not to God. And even if they’re the most wonderful ideas, if there’s no place in them for Christ, for the Church, then their ruin is obvious. After all, sin isn’t only a clear falling into something dark, something evil. The word sin, according to the ancient Hebrew etymology, means “a mistake, expending energy in vain.”

The Apostle Paul speaks unequivocally about the purpose of man and all of creation: O the depth of the riches both of the wisdom and knowledge of God! how unsearchable are His judgments, and His ways past finding out!... For of Him, and through Him, and to Him, are all things: to Whom be glory for ever. Amen (Rom. 11:33, 36). Further, he calls on the servants of Christ: I beseech you therefore, brethren, by the mercies of God, that ye present your bodies a living sacrifice, holy, acceptable unto God, which is your reasonable service. And be not conformed to this world: but be ye transformed by the renewing of your mind, that ye may prove what is that good, and acceptable, and perfect, will of God (Rom. 12:1-2).

From these words of Christ’s disciple we see that the meaning of the Christian life consists in devoting yourself, your labors, all the best in your life, and even your minor endeavors to God. By faith Abel offered unto God a more excellent sacrifice than Cain, says the Apostle. By faith Abraham, when he was tried, offered up Isaac: and he that had received the promises offered up his only begotten son, Of whom it was said, That in Isaac shall thy seed be called (Heb. 11:4, 17-18). A good worker in the field of salvation is he who has established himself in the awareness that, “I am not my own.” It means that everything we’re given in life is God’s. And it’s given not just to use, but to serve the Creator, as in the Parable of the Talents. And the Lord will demand an account—not because of His cruelty—no, the reason is different. It’s because all the same, man will serve, will devote himself to someone. But if he doesn’t set out to dedicate his life to Christ, to serve Him with what he has, then he’s serving someone else.

But how can man avoid this fatal self-deception?

Let’s return to the story of the Prophet Daniel and the Three Youths. Nebuchadnezzar orders Ashpenaz, the master of his eunuchs, to gather the best Israeli youths (Dan. 1:3). His name translates as “a man with an angry face.” And anger is a sign of dissatisfaction with your position, your life, with what’s happening around you. It’s precisely this mood that compels a man to devote all his efforts to achieving those controversial goals that he has mapped out for himself as most important. And among them, first place is taken by comfort. Moreover, comfort in any form—material, social, ideological, even moral. Of course, this doesn’t mean the Christian has no right to a comfortable life in terms of good relations with loved ones, a good position in society, even material security. But all of this mustn’t become the goal, stimulus, and motive for his activity. That is, a Christian doesn’t rebel against the external circumstances of his life, but nor should they direct the vector of his efforts. Therefore, the main principle of the Christian life is gratitude to the Creator. It is gratitude to God—the realization that everything in life is given by the Lord and belongs to Him—that is able to sanctify every undertaking, to dedicate even the most mundane work to Christ, to fill it with His Spirit. This disposition of soul makes it possible to give God all the best, the most precious, without any hesitation. Thus, a grateful man can’t be dissatisfied; he isn’t filled with anger and malice.

This is the deep meaning of Divine revelation in the narrative of the initial story of the Prophet Daniel and the Three Youths. And the whole rest of their lives is for us a good example of dedicating the best powers of your soul to glorifying God. Let this be another reminder for the Christian soul of the eternal and most important question: “What was I created for?...” Let Us Live Before the Face of God
On the Prophet Haggai
Priest Pavel Serzhantov
Spiritual people reason from spiritual positions: “It’s time to rebuild the Temple. We went into captivity for our sins before God. Let us serve Him faithfully—He will help us, and life will gradually get better.” Holy Prophet Daniel
Commemorated December 17/30
Among the chosen youths Daniel had three friends: Ananias, Azarias and Misail. All four steadfastly preserved their faith in the one true God and together refused to eat the king's food for fear breaking one of Moses' laws. They asked their overseer to give them only bread and vegetables, but the overseer was afraid that they would become thin and he would be made to suffer the king's wrath. Daniel persuaded him to make a test and allow them to observe this regimen for ten days.
Comments
×